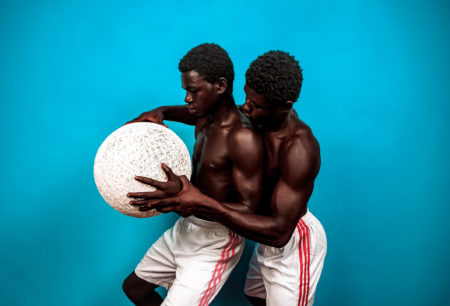 The effect of ‘Black lives matter’

Contemporary African art is a subjet of a new fascination.  Touria el Glaoui, founder of the travelling fair 1-54 dedicated to African art, explains: “it was a collateral effect of the ‘Black Lives Matter’ movement in the United States. People began to look more closely not only at African-American art but also at art produced by African artists.”

The 1-54 art fair (its name refers to the number of countries that make up this continent) is presented online until Saturday 23 January, but also for the first time at the Parisian premises of Christie’s following the cancellation of the event in Marrakesh. 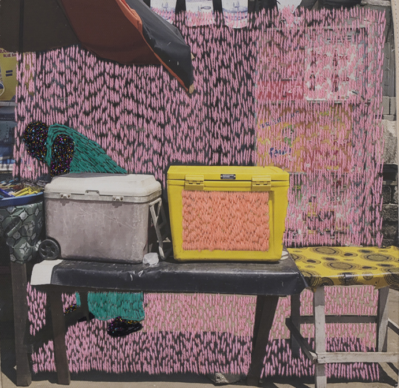 This is a partnership that evidently seeks to attract a new audience through and for the auction house. The fair has also partnered with Artsy, an online platform for selling contemporary art that has 2 million official subscribers. 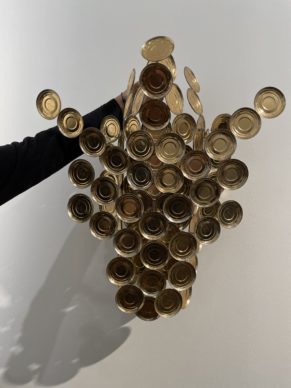 However, it is an event that is modest in size, assembling 20 galleries,  promoting artists from Africa. Here you won’t find those who record the highest prices and who are also the subject of controversy, like the Ghanaian artist Amoako Boafo. This 37-year-old painter’s work has been seen to attract a lot of speculation since he was exhibited by Miami collectors the Rubells in 2019 (See here the interview of Don Rubell), and at the Phillips sale on 2 December 2020 one of his canvases sold for the record price of 948,269 euros. 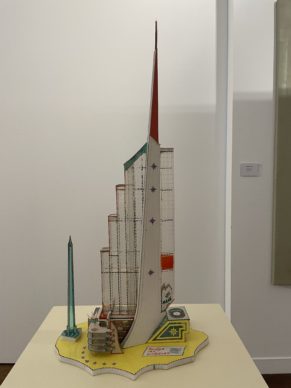 We observe, however, in this French edition of 1-54 that certain well known artists such as the Congolese Bodys Isek Kingelez (1948-2015), whose model of a skyscraper “Tour Moderna”, part of the creation of his utopian cities, is on sale at the André Magnin booth for 60,000 euros. Kingelez was the subject of an exhibition in 2018 at Moma in New York. 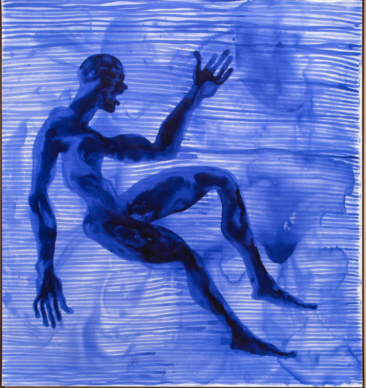 For the same price, we find at the booth of the Lelong gallery a large-scale (200x200cm) blue monochrome watercolour by the French-Cameroonian artist Barthélémy Toguo (born in 1967) who is, among others, one of the stars of the Global(e) Résistance exhibition at the Centre Pompidou, which is temporarily closed (See here the interview of the artist). He often creates work incorporating themes of migration and human suffering. 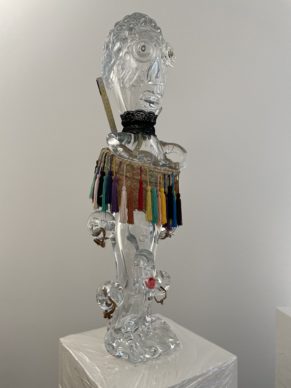 Pascale Marthine Tayou is also a Cameroonian artist (born in 1966) and according to Lorenzo Fiaschi, one of the directors of the multinational Continua gallery (1), his prices have increased threefold in five years. Here, he presents his “Poupées Pascale” made from crystal glass decorated with trinkets, inspired by their forms of African art, but which symbolise the entanglement of world culture in contemporary society. They are on sale for 48,000 euros. Tayou’s works feature in the permanent collections at the Guggenheim, the Tate, and the Centre Pompidou. 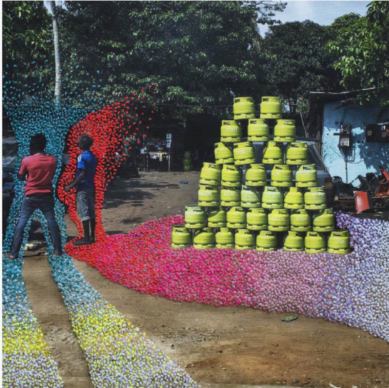 The Lebanese gallerist Marwan Zakhem, who is based in Ghana and opened the “1957 Gallery” there in 2016, travelled to Paris for 1-54. He is exhibiting, among others, Joana Choumali from Côte d’Ivoire (born in 1974) who was awarded the Prix Pictet for photography in 2019 and was displayed at the Bamako Biennial in 2017. She produces photographic prints on fabric which are then embroidered at a second stage. A gesture interpreted as an act of resilience to a series of traumas, such as the terrorist attack in 2016 in Abidjan. These landscapes and scenes of daily life are brightened by coloured threads which create unique pieces. Those from her most famous series, “Ca va aller”, are on sale for 9000 euros, as opposed to 5000 euros 2 years ago.

Lastly the young French Nil gallery is promoting a stunning Ghanaian photographer-portraitist who is only 24 years old, discovered on social media: Prince Gyasi. On the Artsy website his images taken with his phone and graded in vivid colours, depicting the young people of Accra and its hip hop movement, placed ninth among the most sold at the fairs the site collaborates with. In 2018, the 10-run prints were selling for 2000 euros. Today they are being presented for 3500 euros by Nil. The gallery’s co-director, Paul William, estimates that they sold around a hundred last year. 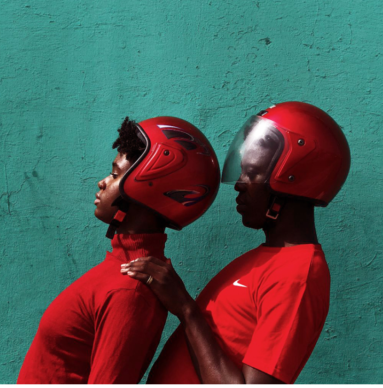 “The market for African art is constantly evolving,” says Touria el Glaoui. “But today we observe greater engagement from collectors, especially in the United States. The art world is trying to be more inclusive. At the large fairs, African artists represented on average 5% of the global supply in 2019 and 0.05% in 2013. One day African artists will be naturally presented at these large shows and African galleries will be invited everywhere. Then there will be no need for them to be categorized. The 1-54 fair will then no longer be necessary. But we are not at that stage yet,” concludes the fair’s director. 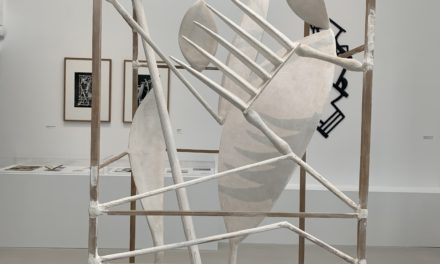