From Krakow to New York 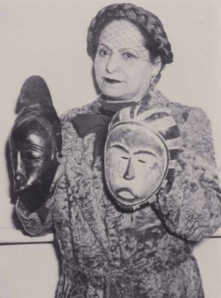 Picture a Polish woman from Krakow born in 1872, daughter of a shopkeeper and granddaughter of a rabbi, who would go on to make her fortune in Australia by establishing a cosmetics brand, before travelling to Paris, New York and London.

The empress of beauty 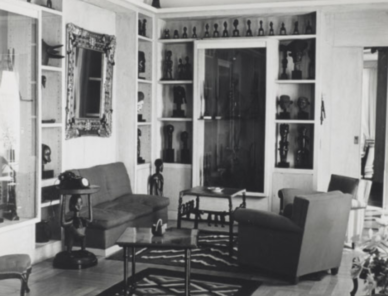 The same woman, Helena Rubinstein, would start amassing an absolutely exceptional collection of tribal art in 1909. “The empress of beauty”, as she was dubbed by Jean Cocteau, had an aesthetic vision that didn’t stop at her beauty salons where she created the concept. 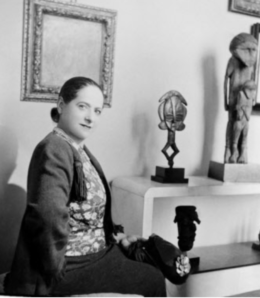 In 2014 the Jewish Museum in New York staged an exhibition paying tribute to her entitled “Beauty is Power”. And that is exactly it. Madame, as she liked to be called, would turn beauty into power by making use of an increasingly liberal society and also using science for her cosmetics, and making use of the avant-garde arts for her collection, which was widely publicized.

Her vision was never orthodox. Her collection of tribal art, mainly African, was made up of 360 pieces when it was put up for auction in 1966 in New York, one year after her death.

And it was Bruce Chatwin – not yet a famous writer at the time – who was overseeing the catalogue, which would also become a museum piece. 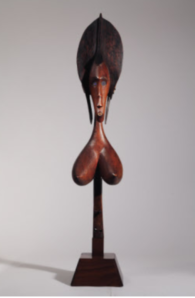 Sixty of the most fascinating works in her possession are now on display at the Musée du Quai Branly until 28 June 2020.

The most astonishing thing about this story is Rubinstein’s precocity and ability to look ahead. She preferred to explain her tastes by making up stories. She used to say: “A good story is always worth more than the truth.”

But her biographer Michèle Fitoussi (1) explained that her first husband, Edward William Titus, was best friends with the modern sculptor who resided in London, Jacob Epstein. “He regularly entrusted her with buying pieces of African art at Hôtel Drouot in Paris. She started to join in the game to the point of making acquisitions in her own name, when for example the sales exceeded the sculptor’s budget.” 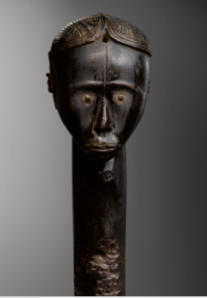 She writes: “In art, even ‘bad taste’” could be of interest on the condition that there is ‘flair and belief in the rightness of the thing’. Often she preferred objects which were funny, strange or plain ugly, according to the existing criteria, as long as it had power. Blandness, conformity and banality were what she disliked above all else”.

David Nash, a modern art dealer in New York and formerly of Sotheby’s, recalls in the catalogue the 1966 sale: “The star lot was the famous female Bangwa statuette, one of the rare African sculptures to depict a figure in motion.” 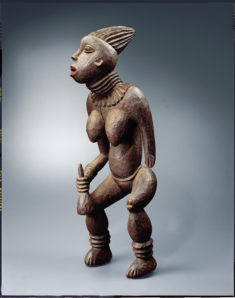 The “African Queen”, as she is currently known, is originally from Cameroon and can be distinguished by a “crusted patina” and a very powerful presence, as can be observed at the Musée du Quai Branly.

She was displayed at the historic exhibition at Moma in New York from 1935, “African Negro Art”. Man Ray had immortalized her in photography the year before alongside a “white queen”, a nude model. In total, Rubinstein loaned 19 works to the show.

In 1966, the Bangwa Queen was sold for the highest price in the sale, 29,000 dollars, before being put up for auction at Sotheby’s in April 1990 and sold for a still huge sum: 3.4 million dollars. It was the Dapper foundation in Paris who seem to have made the purchase at the time and who are the owners today.

But to date the most expensive work from the Rubinstein collection is a Kota reliquary figure from Gabon, sold in 2015 by Christie’s in Paris for 5.4 million euros. It would seem that it was acquired by the royal family of Qatar. In 1966 the same piece went for the equivalent of 6950 euros. 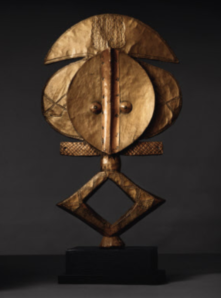 Helena Rubinstein possessed twenty-two Kota reliquary figures. Still very popular with Western art lovers, they embody the extreme geometricization of the human figure, using both metal and wood. In Gabon, these flat statues placed above baskets were charged with watching over the ancestors’ relics which they contained. 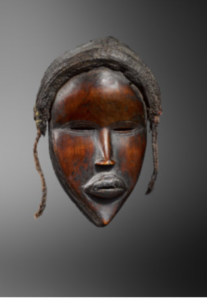 In an African art market that is extremely concerned about the significant number of fake pieces, a pedigree like that of Helena Rubinstein attracts art lovers. Eight pieces from the empress of beauty’s collection went up for auction in 2019. 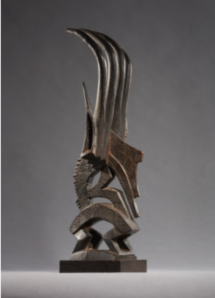 In this spirit, the Parisian specialist dealer Charles-Wesley Hourdé also points out that in New Jersey in October 2018 a small wooden ornament for a Nigerian Ekoi mask, with claws and teeth (35.5cm high), was sold for 103,684 euros. “This is typical of the Helena Rubinstein effect because this object has a maximum value of 10,000 euros,” he estimates.

One of the keys to Rubinstein’s collecting method consisted of buying in bulk. “This is how you collect… By the truckload,” she confided.

The tribal art collections historian Bertrand Goy confirms: “In 1937 she made the purchase of the collection a former colonial officer, F.-H Lem, of 63 objects from West Africa. In 1952 she bought the collection of Doctor Lheureux of 56 funerary terracotta works from the Agni culture (ed: Ghana, Ivory Coast). She always followed two key rules: buy in large quantities so it’s less expensive and get advice from well-informed people.”