Generally, when speaking to artists during these extraordinary times – where the impact is felt on a global scale and involves a large part of the population being confined to their homes – they don’t really complain. They tend to say that they’re confined to their studios all year round and the world health crisis, ultimately, doesn’t change much for them. However, the fact that the earth has stopped turning in its “normal” way in 2020 can have another kind of impact on their work.

The French-Italian artist Tatiana Trouvé (born in 1968) has produced a fascinating body of work during this period of isolation, which she spent alone in her large studio on the outskirts of Paris with only her dog for company.

Tatiana is an artist of international renown, represented by Gagosian gallery and König, and she has exhibited at the Venice Biennale, the Albertina in Vienna and as part of the Pinault collection. It was in her studio that I met her.

She speaks with a softness that is almost languorous, most likely due to her Italian accent which nonetheless cannot conceal an extremely strong sense of determination.

In order to better understand her work, there is an important biographical element we should take into account: during her childhood in Africa with her family, the griots would come and tell the ancient stories of the village. “My father taught architecture in Senegal. I stayed in the country until I was 16. That’s where my perception of magical thinking comes from.”

What is striking about Tatiana Trouvé’s work is the psychological dimension (although I’m sure she would prefer me to say “narrative dimension”) that she is able to embody via the objects and forms that she showcases. The best known of these are her installations in which wires resemble drawings, shoes can be fashioned from concrete and ropes from bronze (see the report on her exhibition at the Villa Medici and the creation of an imaginary map of Gstaad).

She creates trompe l’oeil pieces, objects that aren’t what they appear to be, as well as forms for telling stories within the space, like that of the artworks condemned to remain in boxes and warehouses while vacant plinths and display cases vainly await the arrival of sculptures. The installations can be interpreted as ghosts; the objects embody people.

The studio in the center

Tatiana Trouvé places the studio at the centre of her work. She says: “The studio is a space for the unconscious. It is a place where the world around us can be internalized; it’s a geographical map.”

Snapshot of the world

Between 16 March and 14 May 2020, the dates of the lockdown in France, she made a set of artworks that are a snapshot of the world. “I received a lot of requests to talk about what was going to happen next. I thought these comments would just disappear. Every day I selected the front pages of the free newspapers, the ones that weren’t tabloids, from countries that had been most affected by the pandemic. I printed them out and drew or painted over them.

They are pieces of studios, recordings of a period in time. The newspaper marks a moment in history.” On the covers of the Guardian, the Folha de Sao Paulo and Le Monde she has drawn her studio, scenes from her daily life, or her reaction to current events.

40 works for a single artwork

There are 40 works on paper that together form a single artwork, juxtaposing news from 34 countries. In a boomerang effect, the Guardian in Great Britain, La Repubblica in Italy and the Folha de Sao Paulo have all published their front pages reworked by the artist.

Gagosian gallery is due to publish an edition of this unique oeuvre. 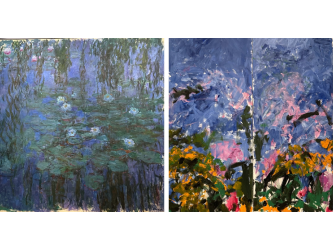 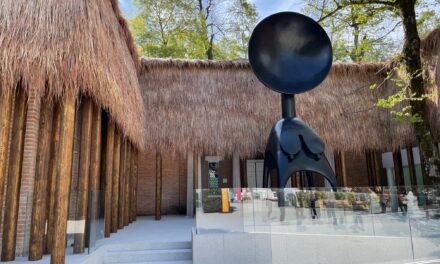