Abu Dhabi: a creative fair in collaboration with the Louvre AD and the future Guggenheim 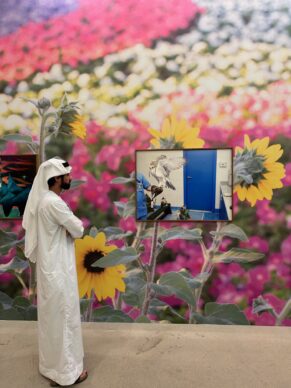 Supported by the state

It’s the only fair of its kind: a commercial show that’s entirely supported by the state, as a cultural event in its own right. Abu Dhabi Art, which features 80 exhibitors from 33 countries, is an event that has existed for the past 14 years as part of the remit of Abu Dhabi’s department of culture and tourism. But until now this fair has had a rather weak standard of artistic offerings. For a long time, participating galleries made the trip to sell works of art to the prince’s family and court. 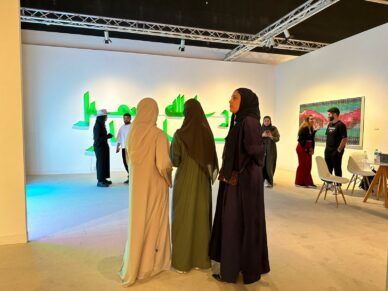 Time has passed, the offering has strengthened, and the public has become more informed. For the 2022 edition, which is being held until 20 November 2022, on the first day as is customary, even before the fair’s opening, several hours were reserved exclusively for the female attendees. It is these purchases, made by woman from Abu Dhabi’s powerful families, which continue to represent the largest transactions.

“Our ambition is not simply driven by financial interest, nor by the desire to be a global fair like those that exist all over the world. It consists of creating a community around this event. Art is one of the economic strategies designed for the post-oil age,” explains the director of the fair Dyala Nusseibeh, who in the past few years has considerably redressed the general standard of the event. Her formula: invite high-quality international curators who will attract galleries, artists, collectors.

This year they are spotlighting an Iranian artist, Farideh Lashai (1944-2013), who is the subject of an exhibition inside Manarat Al Saadiyat, where the event is taking place. Here we can see her latest remarkable pieces of work, paintings on which videos are projected. It resembles a mixture of abstraction with references to Alice in Wonderland, in which she has imagined, according to her daughter Maneli Keykavoussi, an allegory of Iranian society that will be saved by youth. “Artists have the power of premonition,” she comments in reference to current events in Iran.

At the booth of the Dubai gallery Leila Heller, there are also two canvases by Farideh Lashai depicting details of landscapes that resemble abstraction, from the 1970s and 2010, on sale between 160,000 and 180,000 dollars. The record auction price for a painting by Farideh Lashai was 151,000 euros in 2018 at an auction in Tehran.

It is a time of rediscovery for women artists from this part of the world. One of the drivers for purchases for visual artists from the Middle East and the Maghreb is the Guggenheim Abu Dhabi. This gigantic building designed by the American architect Frank Gehry is due to be finished in 2025 for a projected opening in 2026.

The German Stephanie Rosenthal has just been named director of the institution and according to her “50% of the collections have already been assembled since 2009. We buy every year at the Abu Dhabi Art fair. We want to think about the local community. To continue the acquisitions it is necessary to reread art history differently, looking at artists from the Menassa region (ed. acronym for Middle East, North Africa, South Asia)”.

5 years for the Louvre Abu Dhabi 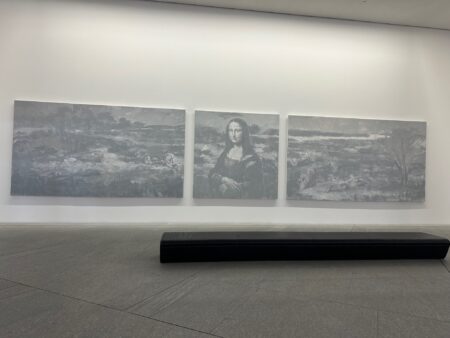 We are  aware of the financial weight of the Emirati State when it comes to acquiring major artworks. As Abu Dhabi Art opened, it also marks 5 years since the Louvre Abu Dhabi opened. On this occasion the French culture minister, Rima Abdul Malak, announced a renewal of the agreements made between the Louvre of the sands and the French museums until 2047 (See here and here a report about the Louvre Abu Dhabi).

A Renoir for 40 million dollars? 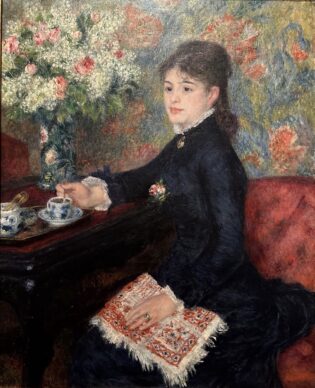 The anniversary also coincides with a breathtaking exhibition dedicated to Impressionism, “Impressionism: Pathways to Modernity”. It contains numerous masterpieces, including one of the most noteworthy which is a painting by Auguste Renoir from 1877-1878. “La tasse de Chocolat” (The Chocolate Cup) depicts a young woman dressed in black against a background of multicoloured flowers. It was bought in 1990 for the equivalent of 13.7 million euros by the Japanese petroleum company Idemitsu before being sold to a family from Philadelphia who parted with it a few months ago as part of a private transaction. The Louvre Abu Dhabi will not disclose the amount of the purchase. However, from insider sources, the sum requested by the sellers went up to 40 million dollars. 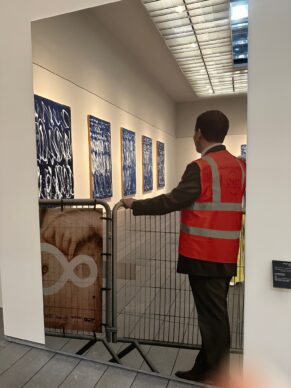 To celebrate five years of this Emirati Louvre, the curators have also conceived a new layout for the permanent collections, punctuated by eleven mirror-paintings made by the star Italian artist, Michelangelo Pistoletto (born in 1933). He has made the trip for the occasion. “My paintings are the mirror to reality, the memory of a moment,” he commented on his artworks composed of mirrors encrusted with images depicting visitors to the Louvre in Paris.

It is the multinational Continua gallery that has given the ensemble to the institution. We find an echo of their participation in the fair, with the presentation at their booth of other mirror-paintings, on sale from 750,000 euros. 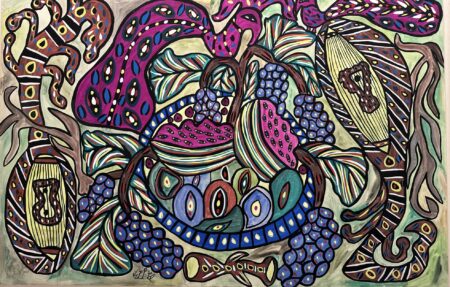 Among the women artists who have been rediscovered in recent years there is the Algerian Baya (1931-1998). In Paris, the Institut du Monde Arabe is dedicating an exhibition to her until 26 March. In his new book, “Regard sur les artistes modernes et contemporains arabes” (1) Brahim Alaoui, an art historian who is a specialist on the subject, has a dedicated chapter on her. 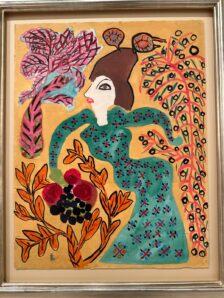 He recounts how the painter was discovered in 1947 in Paris at the Maeght gallery by the theoretician of surrealism André Breton when she was only 16 years old. However after her death she fell into obscurity. Her fantastical creatures and female figures with opulent and stylized clothing mean that she is often categorized as naïve art. Brahim Alaoui points out nonetheless that her market is driven by a number of forgeries.

At Abu Dhabi Art, the dealer Moncef Msakni, founder of the Elmarsa gallery from Dubai and La Marsa in Tunisia, is presenting two of her works on sale between 125 and 150,000 dollars. According to the Artprice database, the majority of her paintings, which are almost always on paper, are sold at auction in France. In 2022 one of her paintings which was exhibited in 1947 at Maeght attained the record price of 145,600 euros at auction in Paris.

The Ko gallery in Lagos is exhibiting installations in terracotta made by Ngozi-Omeje Ezema. For the artist, who has travelled here specially with her newborn and fourth child, the hanging fragments arranged in harmonious forms are a symbol of female strength when women combine their energies. (On sale from 20,000 dollars). 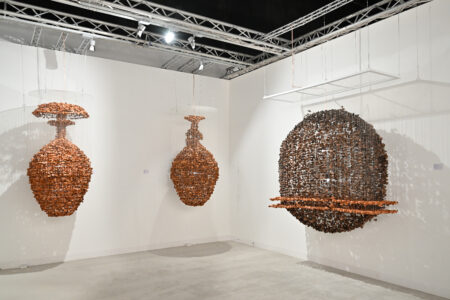 The fair, which is very active, has also been behind certain public commissions. It asked the British artist Conrad Shawcross (born in 1977) to produce a piece for the ancient city of Al Ain. Very steeped in scientific culture, he has created abstract sculptures with the help of an accumulation of tetrahedrons (composed of four triangular faces) which symbolize, according to him, chaos, among other things. One of his works of this type is exhibited at the London train station Saint Pancras, visible to all arriving from Paris. At the fair his Indian gallery, Isa, is unveiling a triptych in bronze, a single piece resembling plant motifs, on sale for 245,000 dollars. 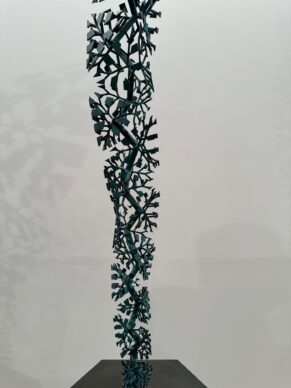 Lastly, as part of its explorations, Abu Dhabi Art has called on the famous French curator Nicolas Bourriaud to stage performances/experiences at the restaurant with the collaboration of Andrea Petrini, food writer. His theory is that “cuisine can be an art”. One of his guests is the Brazilian Yvan Brehm, who has two Michelin stars with his restaurant Nouri in Singapore, who adds: “cooking can also manipulate emotions”.

And Nicolas Bourriaud concludes: “In the 1950s they also used to say that cinema was just entertainment”. Watch this space…