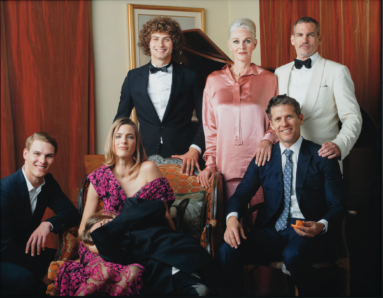 Crises in the art market come and go, and no two are quite alike, but they can help us to understand how market values may be called into question. The crisis sweeping the world today and affecting the economy and the art market is unique and unprecedented. Although the world of art business tends to be frustratingly forgetful when it comes to previous crises, we can turn to the more reliable memories of seasoned professionals.

Alain Tarica is one of the leading authorities on the art market. The private dealer and Picabia specialist, who built the collections of Pierre Bergé and Yves Saint Laurent and also that of Liliane Bettencourt, recalls what was happening in the art world in 1964: “The financial crash at the time was followed by a crash in the value of paintings (watch here Alain Tarica speaking about Pierre Bergé) . The first artists to be affected were the ones who were particularly fashionable at the time: those from the School of Paris, such as Pierre Soulages or Hans Hartung. The latter’s works from the 1950s had been selling for record prices. Within a few months his prices had divided by 10. In December of that year at the Venice Biennale, the American artist Robert Rauschenberg (ed. at that time he was making his remarkable “Combine” paintings using assemblages of paint and objects) was awarded the Golden Lion. Subsequently all the Americans turned away from French contemporary art and towards art from their own country.” This was a major milestone in terms of the importance placed on American creation in art. New York became the global epicentre for the latest artistic developments. 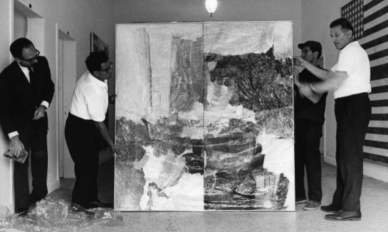 Rauschenberg at the Venice Biennale

“The 1974 oil crisis caused a collapse in values across the art market, including those seen as safe investments. I can remember a painting by the surrealist Yves Tanguy which was sold just before 1974 for 400,000 dollars and resold around three years later for only 150,000 dollars,” explains Alain Tarica.

Philippe Garner, a major player in the market for 20th century photography and the decorative arts since 1971, now a consultant at Christie’s, qualifies this however by saying: “back then auctions were considered to be a wholesale market. They functioned almost exclusively thanks to dealers.”

19 October 1987 is known as “Black Monday”, the day New York’s Dow Jones was hit by a record drop. Less than a month later, Sotheby’s put Van Gogh’s “Irises” up for sale, one of the Dutch artist’s legendary paintings which had for a long time been in the possession of the writer Octave Mirbeau. “It was bought by the Australian businessman Alan Bond for 53.9 million dollars, but he was unable to pay it. He was bankrupt,” says one of the key figures in the market for modern art, New York dealer David Nash, who worked for Sotheby’s from 1961 to 1996 (watch here David Nash speaking about David Rockefeller). “I sold it for almost the same amount to the Getty Museum in Los Angeles. The transaction consisted of a sum of money completed by the sale of paintings owned by the museum.” 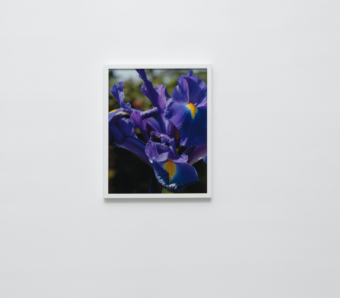 “Overnight, the Japanese who had dominated the impressionist and modern market completely withdrew. The situation was aggravated by the war in Kuwait in 1991. In May 1990 I organized an impressionist and modern sale with a total estimate of 350 million dollars. The following year I was only able to put forward a sale with an estimate of 35 million dollars. It wasn’t until 1994 that the market hit its stride again. Around the same time, contemporary art – produced after the 1940s – started to see an increase in terms of supply over impressionist and modern art, whose high quality works began to become scarce,” observes David Nash. For Philippe Garner, “in certain areas, like Art Nouveau glassware, the values have never topped the prices of the 1980s. The Japanese were the ones who made up that market.” Alain Tarica remarks: “Paintings by Leonard Foujita, but also Vlaminck, and Renoir’s later works, saw a steep decline in their value.”

“The September 11 attacks had as a direct consequence the cancellation of the first Art Basel Miami Beach fair. This had a big impact on the opinion of the art market. A year later Bernard Arnault also withdrew from Phillips auction house after significant losses,” recalls David Nash.

On 15 September 2008 the American Lehman Brothers bank declared bankruptcy. “That day the Met opened an exhibition on modern Italian painter Giorgio Morandi in… the Lehman wing of the New York museum. At least two members of the banking family were present, but they weren’t the ones being talked about. That same day in London Damien Hirst sold works for 200 million dollars that had been recently made in his studios by 70 people. The contrast with Morandi was striking,” explains David Nash, who adds: “That year Sotheby’s and Christie’s, who had both paid out guarantees (1), lost a lot of money. They stopped the practice, but only for one year.”

According to Alain Tarica, “at the height of the 2008 crisis it was Pierre Bergé who insisted, against the advice of Christie’s, that the Bergé Saint Laurent sale should take place in 2009. The whole market was at a standstill. And it ended up being the sale that restored the confidence of the actors in this field”. The sale made 374 million euros, setting an absolute record at the time for the auction of a collection. https://youtu.be/VA3gxkVb_fA

Also in 2008, Daniel Balice founded, together with his partner Alexander Hertling, the now influential Balice-Hertling gallery, specializing in emerging artists and located in what was at the time an alternative site in Belleville in Paris (watch Alexander Hertling speaking about Neil Beloufa here). “The market was stagnant. People were open to more experimental works but nothing like that was happening in Paris. We were immediately selected to take part in Art Basel. Our first exhibitions were sold out.”

In Alain Tarica’s view, “the art market won’t disappear, but it will adapt with new prices. The major survivors will be the biggest names from the best periods. Take Chagall: outside of his Russian period (ed. up until the early 1920s), he produced many very mediocre things, and their value is inevitably going to fall.” David Nash believes it is “difficult to estimate how long it will take for the art market to recover. But there’s still a lot of disposable cash and a clear appetite for art. Those hunting for bargains are already on the lookout.” According to Philippe Garner, “auction houses operate on the principle of constant adaptation, including in times of crisis, by managing sellers’ expectations and setting reasonable estimates.  Ars Longa, vita brevis… ”   Lastly, for Daniel Balice, up until now “the large gallery owners have been seen as rockstars. The prices they set for young artists are prohibitive. They regularly exceed the 50,000 euro mark. From now on we will be seeing more modest practices. There will be fewer financial interests at stake. (The prices for the artists at our gallery range on average from 3000 to 15,000 euros). Right now I am particularly concerned for the artists who are in precarious financial circumstances. Without them the art market would not exist.” 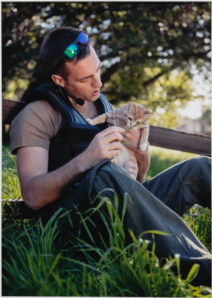 (1) A sum guaranteed to the buyer by the auction house or a third party with their agreement regardless of the success of the artwork at auction.