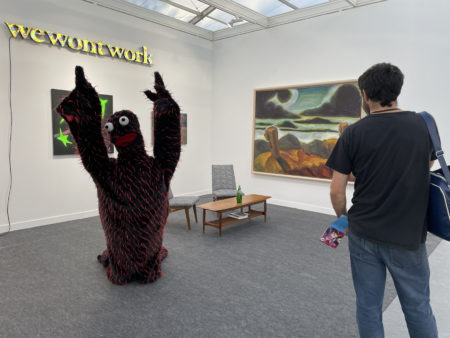 Seen in light of recent events, it could be said that there’s not one but rather several art markets.

The star work in Paris: Calder

So what’s the common thread between the sale for 21.4 million euros at Sotheby’s in London on 14 October 2021 of an artwork that resembles one big joke by an artist whose identity remains unknown, Banksy, and – for example – the star work this week in Paris where the Fiac is taking place (the foire internationale d’art contemporain), a monumental “Stabile” conceived in 1975 by renowned contemporary artist Alexander Calder (1898-1976).

Watch Alexander S. C. Rower, president of the Calder Foundation and grandson of the artist, speaking about the Dragonfly.

The sculpture, which is 17 metres long, has been installed in the Place Vendôme until 2 January 2022. 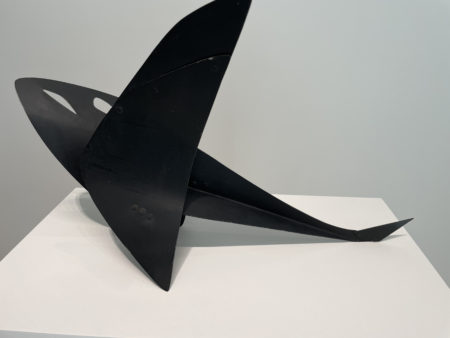 The only element that links them is the fact that both works are valued – for very different reasons – at over 20 million. For the rest it should be pointed out that Banksy’s visual creation is next to zero, but he does know how to compose with brio in the auction world, most likely with the cooperation of Sotheby’s. We recall the stencil work that sold in 2018 for 1.1 million euros depicting a little girl holding a balloon, which partially self-destructed following the sale in 2018 only to be rebaptized “Love is in the Bin”. 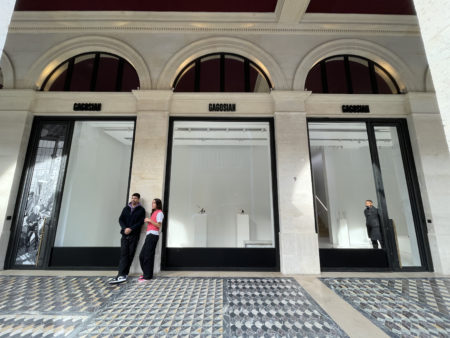 As for Calder, he is the subject of two exhibitions at Gagosian in Paris. The multinational dealer is opening a third space in the French capital this week, on the Rue de Castiglione. Its primary point of interest, since the site is of a modest size, are its huge windows. It’s an “opportunity for an exceptional display”, according to the director of Gagosian Paris, Serena Cattaneo.

As well as the giant red multifaceted dragonfly at the Place Vendôme, Gagosian are presenting 16 sculptures, 5 paintings and various gouaches, on sale from 200,000 euros, made by the poet who has gone down in history for his mobile sculptures.

Gagosian is betting considerably on Paris, since at their space in Le Bourget they are showcasing the colossal work of one of the major sculptors from the late 20th century, the American Richard Serra (born in 1938). His abstract creation in corten steel, made from crafted curves and weighing 240 tonnes, spreads across 18 metres.

After last year’s fair was cancelled due to Covid, the Paris landscape has been transformed on the occasion of Fiac 21. As well as the usual temporary sculpture park based at the Jardin des Tuileries (24 works), the gallerist Thaddaeus Ropac has installed a 9-metre-tall bronze by Georg Baselitz (1938) outside the Académie des Beaux-Arts, opposite the Pont des Arts (until 7 March).

The German painter is the subject of a remarkable retrospective at the Centre Pompidou. At the Fiac, Ropac is presenting a recent painting by the master of contemporary figuration for 1.2 million euros. 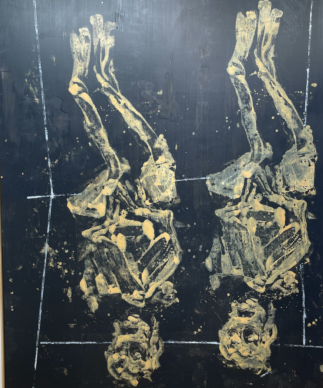 “This year the Fiac has an exceptional wind in our sails, boosted by Paris’s attraction, its programming in museums like the Collection Pinault, the Fondation Vuitton, and ambitious exhibitions at public institutions, but also its lifestyle,” highlights Jennifer Flay, the director of the show. She does not, however, comment on the announcements from the owner of the fair (2) and she is optimistic about the slowing down of international flights owing to the public health crisis.

The 2021 edition, which is of an excellent quality, is taking place for the first time at the Grand Palais Éphémère. This temporary structure installed on the Champs de Mars, designed by the architect Jean-Michel Wilmotte, offers 30% less space than the original Grand Palais.

With a more restricted installation layout, it is composed of 174 exhibitors as opposed to 199 in 2019. Here we find artworks the likes of which have rarely been seen until now at the Parisian fair. 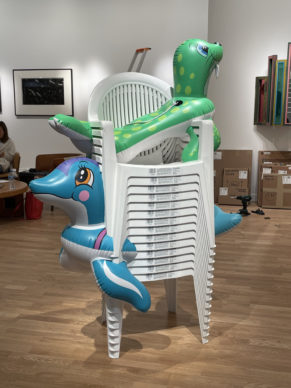 The multinational Pace gallery is exhibiting a work by Jeff Koons from the early 2000s, a trompe-l’oeil bronze of a child’s lifeboat, on sale for 4 million dollars.

The more financially accessible works, presented by younger galleries, can be found in a pavilion (the Galerie Eiffel) that has been erected at the far end of Wilmotte’s structure.

Here we find, for example, the Allen gallery, which has existed since 2013 but has recently based itself in the Marais. Its owner, the Australian Joseph Allen, is presenting one of his “new” artists at the Fiac, the Dutch Jacqueline de Jong (born in 1939) whose remarkable polychrome paintings are inspired by figures from the Russian constructivist Malevich. This series was exhibited in 2019 at Amsterdam’s Stedelijk Museum (on sale for 50,000 euros). (See here an interview of Jacqueline de Jong at Frieze in 2019) 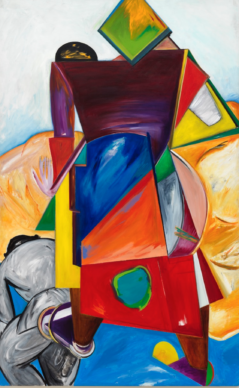 Under the effect of Brexit, among other things, the offerings in terms of galleries has never been so rich in Paris, perhaps not since the post-war. In fact the capital is attracting new professionals who are opening premises in the Marais but also on the Rive Droite, in the most sought-after epicentre of the art market, Avenue Matignon.

This is the case for example of the French-Somali dealer from Chicago, Mariane Ibrahim, at number 18 (see the report on her here) and Cécile Fakhoury at number 29, who is already active in Abidjan and Dakar and specializes in the contemporary West African art scene. 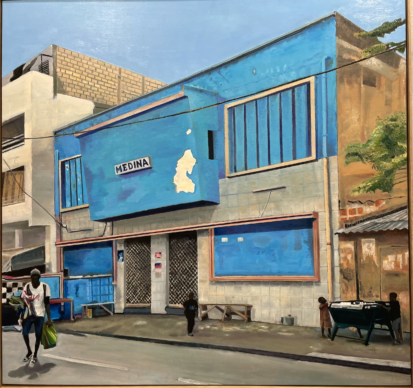 At the Fiac, as part of the Galerie Eiffel, she is exhibiting the Senegalese artist Cheikh Ndiaye (born in 1973), with his hyperrealist paintings of outdated architecture (on sale for between 30,000 and 50,000 euros). The Centre Pompidou possesses several of his canvases. Contemporary African art is in vogue and Paris has become the platform for representing its expressions outside of the continent.

(1) The Sotheby’s catalogue dated the work from 2006. In order for it to self-destruct, a later intervention was therefore required with a motorized system and battery that could be triggered remotely, which would not have escaped the notice of the sale experts.

(2) The organization of the Fiac has nonetheless been shaken by announcements from the owner of the fair, RX, who, according to Le Monde, intended to instate a single director at the head of the Fiac and its other leading fair, Paris-Photo. Michel Vilair, director of RX, says: “The question of the directorship of the Fiac and Paris-Photo in the future is premature and we are not there right now. Nothing will be decided before the end of the year.”