We are living through times of scarcity in the contemporary art trade, and yet they all keep coming. As a result of Brexit, the likes of Zwirner, White Cube, Continua and Levy-Gorvy are all descending on Paris. Long after Thaddaeus Ropac and Gagosian, these multinational galleries are now all setting up shop here, while the French boost their existing presence with new spaces on Avenue Matignon, in the case of Perrotin and Almine Rech, or in Saint Germain des Près for Kamel Mennour. 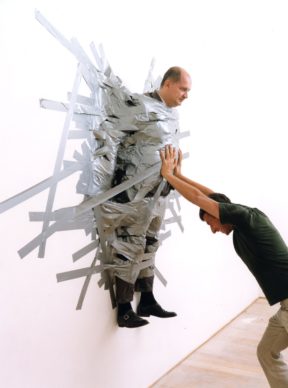 The latest to touch down in the French capital is the Italian gallery that is probably best known internationally: Massimo de Carlo. This early promoter of Maurizio Cattelan who – legend has it – used to work as a pharmacist by night to make ends meet when he started out, is already based in Milan with two spaces there, as well as in London and Hong Kong. Massimo de Carlo likes to be bold. It’s difficult to define his eye but he knows how to address the different global markets. He is widely seen as a good promoter of current trends in the United States. 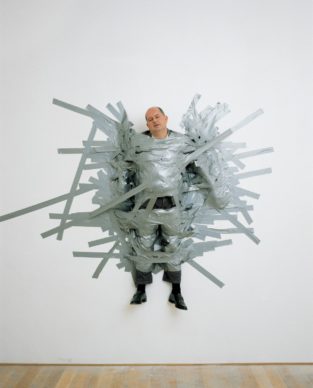 One would expect him to be an epicurean. He speaks slowly, but he has developed a new gallery model for Paris with a rapid turnover. 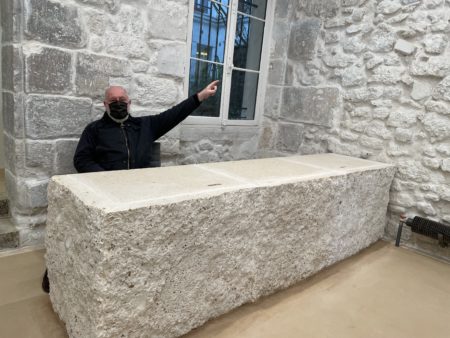 At his small space in the Marais, which opened on 9 February 2021, the concept is simple: a single-work exhibit by one artist. The site, which is barely 50m2, was designed by the Japanese star architect Kengo Kuma. A long reception desk in massive limestone hewn from a quarry in the region of  l’Oise, encrusted with fossils, constitutes the main defining feature. It is made out of the same material as the stones that appear on the wall.

Changing all the time

The artistic offering changes every two or three weeks, or even weekly. There are no opening events. The exhibits are only promoted via social media. This is a new kind of gallery for the 21st century, which uses a concept developed in Paris by Lucio Amelio, a Neapolitan gallerist whom Massimo de Carlo greatly admires. “Pièce unique” by Lucio Amelio was inaugurated in 1989 in Saint Germain des Près. The Milanese dealer bought the rights to the name and took it to the other side of the Seine. 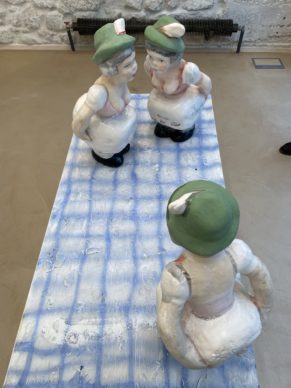 Massimo de Carlo’s Pièce Unique gallery is inaugurated in Paris with the work of an artist from Los Angeles, Kaari Upson (born in 1972), who had been noticed in previous times (2019), in other words during the last Venice Biennale and in 2017 at the Whitney Biennial. 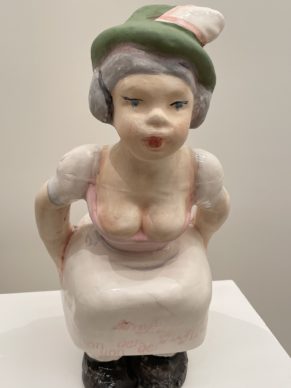 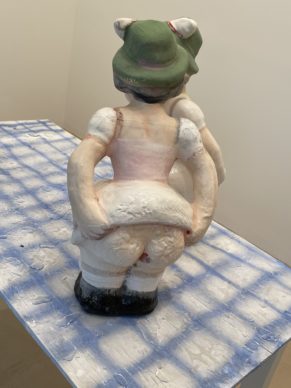 This artist of German origin found a popular female figurine at her mother’s house, whose appearance was sweet from one angle and slightly pornographic from the other. From the front the figure resembles a little blonde girl from the mountains like the Swiss  little girl Heidi.

From behind she overtly displays her buttocks marked in red. Three replicas have been made of the figurine and placed on a table covered with a damp wax cloth in a trompe l’oeil effect. Like at home, one might say. It’s about popular bawdiness and, less consciously and more seriously  the traumas or pain that this could be a vehicle for…

Massimo de Carlo thinks that the market will shrink and says he will do no more than 6 fairs a year, compared with double that in the past. For now he is unable to visit his gallery in London, even less so his gallery in Hong Kong. To make his way to Paris he got in his car and drove for seven hours. To meet the risqué doll-like figures made by Kaari Upson.

Next exhibition beginning on March 2 will be about a Panorama  by Sigmar Polke in dialogue with various exemples of landscapes by contemporary artists.