Rem Koolhaas: In the mind of a celebrated architect… and his son

Approaching his 72nd birthday, Rem Koolhaas is a global star of architecture.

He’s the winner of the Pritzker Prize, the “Nobel” of architecture, the Praemium Imperiale, awarded to him by the Japanese emperor in 2003, the Golden Lion at the 2010 Venice Architecture Biennale, as well as Chevalier of the Legion d’Honneur in France.

He was also director of the Venice Architecture Biennale the year before last, and is the architect behind the remarkable Prada Foundation in Milan, the forthcoming Fondation Galeries Lafayette in the Marais in Paris and the Doha Library in Qatar.

Originally from Rotterdam, Rem Koolhaas looks like a monument in real life. He has a large, threadlike silhouette, and a look that is chic, austere and relaxed, which he often completes with a fisherman’s beanie.

The Dutchman is not only idolised in architecture circles but also by intellectuals,, contemporary art enthusiasts and even the cooler-than-thou fashion crowd.

I was introduced to Rem Koolhaas in 2012. He’s one of those people who, after meeting him, leave you with more questions than answers.

While his fellow starchitects try to write themselves into History using easily identifiable signatures from one project to the next, Koolhaas (speaking in French) professes: “It’s important to retain a certain freshness. We have to force ourselves not to repeat ourselves.”

Koolhaas’s son Tomas, 35, has helped to shine some light on the enigmatic architect in a new documentary, which should be travelling around the major film festivals, beginning with Venice last 9 September. One suspects that the chord between father and son played its role, for after seeing the film we have several clues to the architect’s sinuous mental processes.

Tomas, who works in the film industry in Los Angeles, underlines: “When you make a film about your father the first thing people ask you about is objectivity, or more specially your lack of it. Without getting too philosophical about it I believe no human being is capable of true objectivity, but it is true that being Rem’s son I’m even less objective than an outside film maker would be.

Instead of seeing this as an obstacle to be overcome I decided to use my specific subjective perspective as an attribute to be utilised to give the audience insight into aspects of Rem’s work, life and way of thinking that no one else could.”

In fact, the documentary is first and foremost a catalogue of Koolhaas’s mental processes, and this is what makes it  fascinating. Because the subject is constantly working against entrenched ideas. Rem is the king of paradoxes and out of this he has constructed a system to seduce us.

The documentary largely takes the form of personal confessions.

It is accompanied by images of the architect or his buildings and is punctuated with sentences like:

“In the moment there is a consensus I start getting nervous and begin to crash.”

“Before everything I was and maybe still am a journalist”

“I’m not always asking the right questions. But I recognise the right answer.”

“A building has at least two lives– the one imagined by its maker and the life it lives afterward- and they are never the same.”

The only thing in the film that jars is the incidental music that accompanies the architect’s confessions. The sentimental play of piano and violin simply does not match the subject matter.

The end of the documentary is interspersed with interviews of ‘users’ of his architecture, from the homeless who frequent the library he designed in Seattle, to the happy owners of private homes in France. It’s not always easy to understand the casting, which seem a little arbitrary.

In the final sequences, which show the architect from the back in the desert, you can hear him reflecting in his Dutch accent, “I feel I’m never absolutely not the same brain I had 20 years ago.”

A double negative makes a positive doesn’t it? Still don’t understand? Well, take it up with the master of paradox. 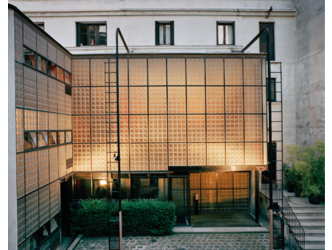