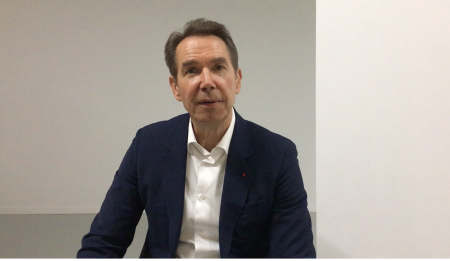 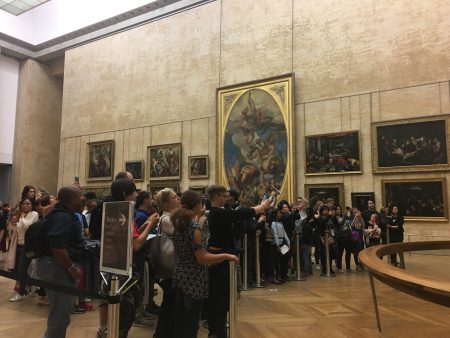 In front of Mona Lisa 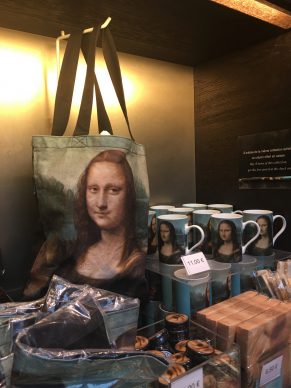 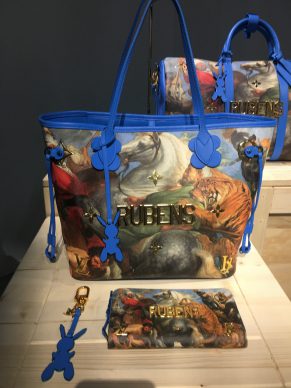 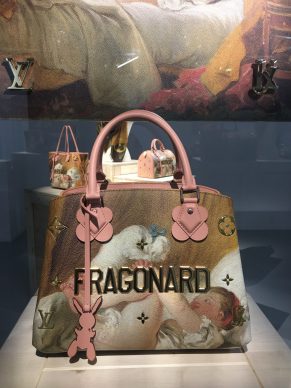 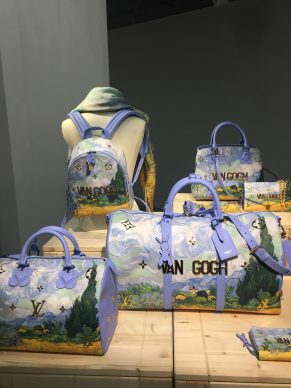 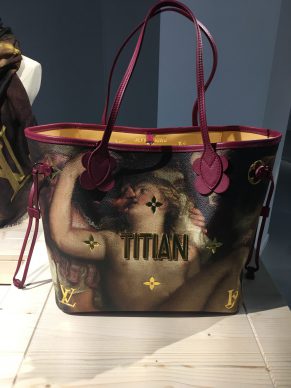 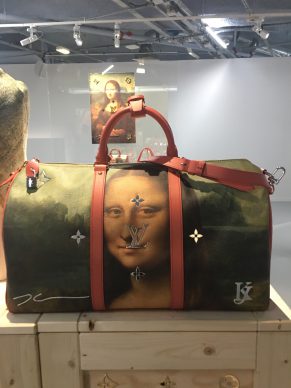 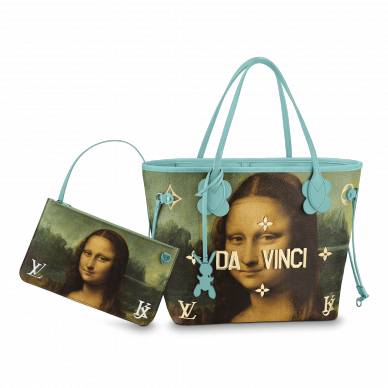 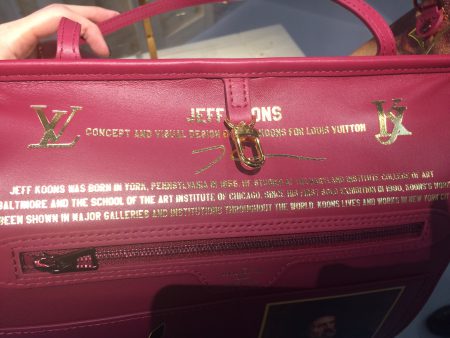 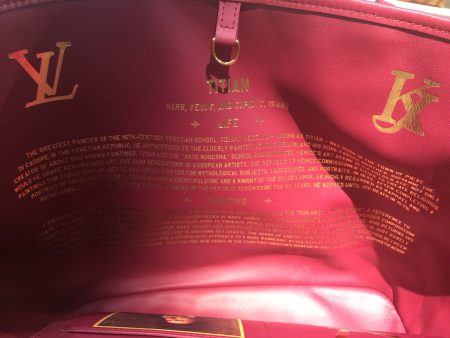 Jeff Koons (born 1955) is one of those artists who inspires fascination and revulsion in equal measure.

On the occasion of his 2014 retrospective at the Pompidou Centre, I was astonished to find myself subjected to vitriolic online attacks after I defended his show, which incidentally drew a record 650,000 visitors (the American version of the show at the Whitney Museum in New York was, I felt, more successful for being more didactic).

His last work, announced last week, is  a collaboration to create bags with the luxury brand Louis Vuitton.

The meeting was organised by Louis Vuitton, and we’re surrounded by the new bags.

I should add that the first time I saw them, a month earlier, after signing a non-disclosure agreement, I was very surprised and not in a good way. But I changed my mind.
The bags feature canonical works commonly used by the souvenir industry– the Mona Lisa one especially.

The most famous painting in the world is splashed across the surface of aprons, bags and mugs splash. And Jeff Koons does the same thing.

He takes the idea of a mass culture aesthetic, understandable (or not) by all, but aims it at the financial elites.

And this is why it is disturbing and interesting. Because Art is not about good taste. (If the bags would have been just cute the project would have been with no doubt empty and dumb.)

Obviously the bags are extremely well made, incrusted with the LV monogram in gold, and accompanied by these sort of little leather key rings in customary Koons silhouettes, plus other details, like in the interior of the bag is a biography of Jeff Koons and another of the painter of the featured works, which hailing from five museums. (1). But that ‘s not what makes them interesting.
Those who believe Jeff Koon’s solely interested in money are sorely mistaken.

So allow me to play the devil’s advocate.

Jeff Koons should be acclaimed for the following reasons:
– He’s a subtle and intelligent artist. Dazzling would be the right word, just like his works.
– At the end of the ’80s and in the ’90s especially, he produced a faithful reflection of a society that aspires to be perfect and polished like retouched magazines images.
– Probably his most successful and most provocative work to date was made during that period of his life with La Cicciolina, a well-known porn star. In glass works and polychromed wood, in small and very large, Koons developed a hymn-like work to one of the taboos of our society, sexuality. Like everything with Koons, it is sublimated. He kept it hidden for several years, however, for personal reasons (divorce, child custody).

– Jeff Koons has been the subject of superficial analyses by professionals and the general public alike.His commercial success overshadows his work. (In 2013, his ‘Balloon Dog (Orange)’ became the most expensive work ever sold at auction by a living artist, fetching $41.1 million).

After this, all the works in his balloon series,  were widely seen as actual balloons, inflatables, or children’s toys. The true meaning of the work, which was to sublimate childhood objects through conceptual trompe-l’œils in polished metal, escaped much of the audience. To say nothing of the sexual character of the shapes.

– Jeff Koons (like many artists) is an American heir to the Marcel Duchamp’s idea of the readymade, as well as Andy Warhol’s Pop principles.

– Finally, and obviously, Jeff Koons is obsessed by sex in his work, whether allusively or otherwise.

Our interview began with a discussion of Fragonard, the 18th century French painter, who also happened to be completely obsessed.

Koons showed me a photo of a Fragonard painting on his phone  which currently hangs in his bedroom. It shows a delectable young girl with a pink complexion carrying two puppies in her arms, which look like they’ve just suckled on her lovely chest(bringing to mind contemporary paintings by the American John Currin).

In interview, the artist’s persona mirrors his sculptures: he offers a polished image, with no sharp edges. He speaks in a low voice, impassive, never betraying signs of impatience, and is a master of evasion, employing an array of abstract concepts. He talks about transcendence, humanity, connectivity, Plato and, of course, the history of art.

I have hard time bringing him back to a concrete discussion about why he has produced this work for a major luxury brand.

He dismisses the suggestion that his work is kitsch, which to his mind implies a pejorative populism.
If I had to express my personal preference, I’d say that the Fragonard bag is the most successful and the most provocative, showing a young girl, her crotch exposed, frolicking with a cute little dog.

More broadly, I do not believe that Koons’ ‘Gazing Balls’ series (2), with its canvases reproduced in minute detail but devoid of an Old Master’s sensuality, is his best work.

Koons is without question more sculptor than painter.

By contrast, since 2015 he’s also been working on sculptures using popular themes – think giant trinkets depicting cute dancers (the Ballet Dancers) in highly polished metal which prevents you from seeing their precise contours. It is unquestionably a new high point in his work to sublimate everyday objects.

On a more conceptual level, and to get back to the bags, the Vuitton-Koons project places Rubens, Van Gogh, Leonardo, Titian and Fragonard in a situation normally occupied by brands. By placing their names in gold letters on these clutches and backpacks, he creates ‘painting brands’ which replace the luxury brand, and which appear even in front of the reproduction.

It’s a way of creating a new hierarchy and populating the street with different images. He does not see it this way, however.

Here is an extract of the long interview

Is a reproduction an artwork too?

Can a bag be a work of art?

But are they a work of art?

In the fashion industry, the brand written on the bag is Dior or Prada. But here it’s Rubens, Fragonard and Titian…

I think they’re eternal forms, they’re people, they’re symbols of people, and they happen to be artists that I’ve chosen because I’m an artist. You also have the monogram, the LV, and you have the JK, but that again is another opening it up. It’s really about the viewer. It’s about the bag holder. It’s about their transcendence, This is not about Rubens’ transcendence. Rubens did it and he showed that he did it through love. But this is about the carriers of the bag,

But at the end of the day a reproduction of art is not art, right?

These pieces become reenergised, these images are revitalised because they’re participating now in the present moment and so they’re kind of alive again within a new medium – whether it’s in the new medium of a gazing ball painting, which is a unique, individual form within itself, or whether it’s in the bag.

What’s your opinion about kitsch?

I’ve never believed in kitsch. It’s a word that is actually the opposite of my work philosophically. For me kitsch is a word which segregates and creates hierarchy, and my work is completely opposed to any form of segregation, hierarchy or judgement.
But it’s the same idea as the mass-produced mugs and t-shirts you find in souvenir shops?

I’m aware that museum and different organisations use it in mass production . You can get a coffee mug with the ‘Mona Lisa’ on it, you can get a t-shirt or you can get socks or something with ‘Mona Lisa’. But everything comes back to the type of care that you give and how you’re presenting it. It’s like using a word. You can present a word within a certain sentence and you have a line of poetry, or you can present words together and they have no meaning.

What is your next project?

I’m making a new series of sculptures called ‘Porcelains’, and they’re outdoor sculptures. I probably won’t have an exhibition of these works for about two and a half years but I’m very excited.

They are metaphysical but figurative…

You can have different definitions of metaphysical. I’ll go to a deep feeling definition, which would be a right here, right now, tied to the eternal.

(2) The ‘Gazing Ball’ series, commenced in 2015, consists of canvases of Old Masters, reproduced identically, on which he encrusted ‘gazing balls’, bluish balls that can be found, it seems, as decorations in certain American gardens.

In front of Mona Lisa