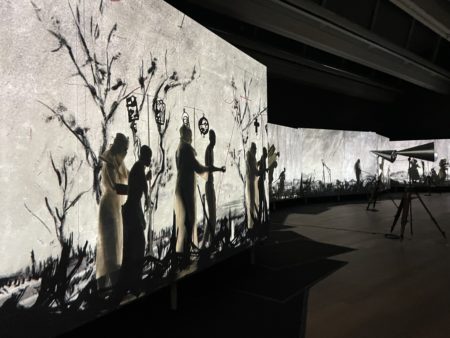 The exception of Luxembourg

Luxembourg is known for its unique system of banking. What is less well known is that the duchy is also unique in terms of its museums compared to France, since this type of cultural institution is currently open there.

Ahead his retrospective at the Royal Academy

It’s therefore a good opportunity for those living near the border, and others, to pay a visit between now and 30 August to the Musée d’art moderne du duché (Grand Duke Jean Museum of Modern Art), MUDAM. And ahead his retrospective in autumn 2022 at the Royal Academy in London. 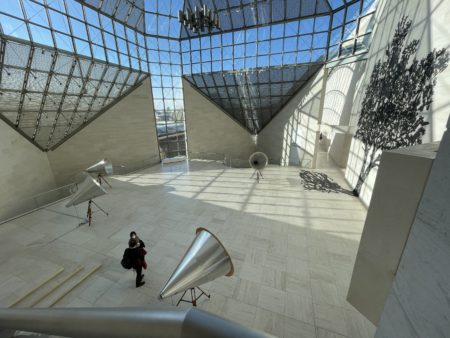 In the building designed by I.M. Pei, reminiscent of the pyramid structures of the Louvre, there is an exhibition being staged that is dedicated to the great South African artist William Kentridge (born in 1955). Renowned for his black-and-white images, which are often animated, he has been a frequent fixture in Europe in recent times since he was the subject of a retrospective at the Kunstmuseum in Basel, among others, when I interviewed him (See the report).

But there are two excellent reasons, among many, to visit his exhibition at Mudam. The first is that the museum is exhibiting the South African’s absolute masterpiece, made in 2015, entitled “More Sweetly Play the Dance” which you may have been able to see at Luma in Arles in 2016 or at the Kochi Biennale in 2018 (see the report).

I also visited his studio in 2017 where he spoke about his fascination with mime (See the report).

A projection across 21 metres

In its Luxembourg version there’s an extraordinary installation of a projection across 21 metres that combines monumental charcoal drawings, shadow puppets and cinema, all animated in an endless procession with a musical score from a haunting brass band. 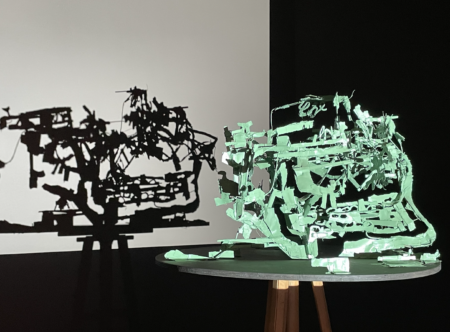 Kentridge doesn’t like univocal linear narratives along the lines of a great epic saga. All of his stories are fragmented, to avoid any official or overly easy message. We are faced with marching invalids, oppressed figures, convicts, the dead, and dancers in white robes. They are all merely players in the great story of life.

The viewer is hypnotised by these shadows that seem to have emerged from a modern-day myth of Plato’s cave. 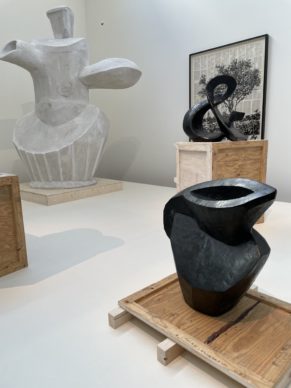 The second reason is that Kentridge is exhibiting his sculptures, revealed here for the first time. They represent everyday objects in cubist forms, displayed on a giant scale, reminiscent of Brancusi’s style which would be worked in papier mâché. But what might appear to be a flimsy material is in fact bronze that is most often charcoal black.

A nose inherited from Dali

We thus find an oversized nose which looks like it’s been inherited from Dali, a telephone, a carafe, and a projector, which are incidentally elements from the monochrome alphabet that populates his films and charcoal drawings. The drawings lead to animations and sculptures as well as theatrical shows.

At Mudam we can also see two films that he made in 2020 centring on the figure of the Sibyl and also produced an opera, the Cumaean Sibyl, a priestess from Greco-Roman mythology and the Sibyl from Dante’s Inferno (1303-1321).

Susanne Cotter, the director of the museum, talks about their Kentridge exhibition.

From trauma to human grace

This is how Kentridge’s world is populated, like a great imaginary procession that explores – through ostensibly outdated narratives, through subtle touches – the depths of intimacy, trauma and also human grace. 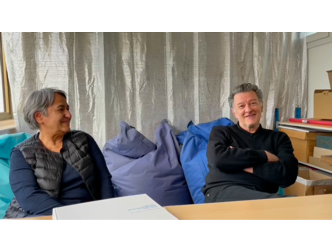