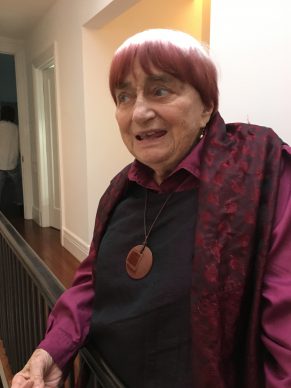 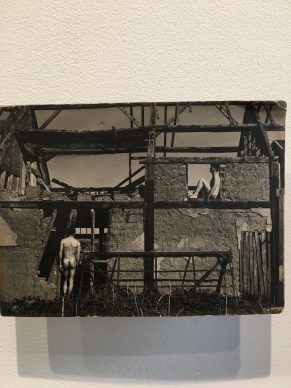 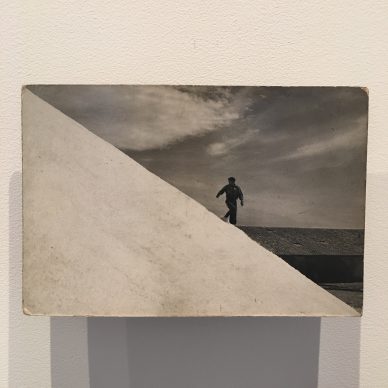 You can’t mistake her.

She is coiffed like a contemporary Capuchin monk with her two-tone haircut, white at the roots, burgundy at the tips. She walks slowly but her spirit fizzes like lightning.

Agnes Varda is the high priestess of the celebrated French New Wave from the ’60s and is the subject of an excellent exhibition, the first ever in New York, at Blum & Poe.

You half expect her not to remember anything but she points out the smallest details that prove that everything is in the right place. Take her for who she is.

Agnes Varda is a remarkable, young and hyper-creative 88-year-old artist. Of course how can you forget her 1961 film ‘Cleo from 5 to 7’ which retells two hours in the life of a beautiful and mysterious Parisian woman waiting to find out if she’s contracted a terminal illness.

Of course Agnes Varda has been the subject of several exhibitions in France an even in USA like at Lacma in Los Angeles in 2013 .

But in New York, what we discover first and foremost in this concentrated show is her talent for combining video and photography in the same work.

Here she speaks about mixing the two techniques:

The appeal of this exhibition, organised by the excellent independent curator Olivier Renaud-Clément, lies in its overall rigour.

The pieces by Agnes are of the contemplative variety.

In fact, she says: ‘Everything that I do, I do to bring peace.’

She managed to convince the plumber, his sister and the village teacher to star in a reconstructed family scene which could conceivably be the work of a 17th century Dutch painter were Varda not combining photo and video.

Her seascape could be a great wave by Courbet were it not a sound and image installation which she’s added sand to.

The noise of the waves reverberate in New York at the same time as the siren of an NYPD police car.

It makes you want to lie down and stay there. Her works have been sold to Moma in New York and to Lacma but it’s the first time she’s come to New York as visual artist, as she explains in her own words:

In June Agnes Varda will be releasing the film she’s made in collaboration with street artist JR, ‘Visages, Villages’. ‘Once a month, over the course of a year and a half, we visited people in the villages aboard a “magic lorry”. I forced him to leave the city,’ delights this new visual artist.