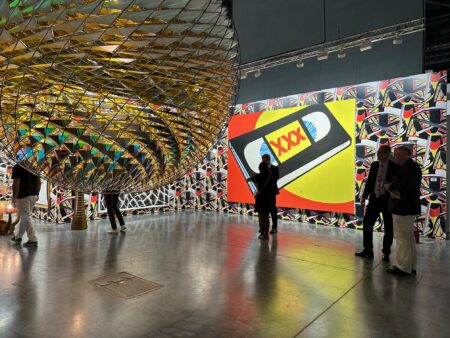 Art Basel emerged at Miami Beach 20 years ago and since then no other art fair has made such a powerful impact on a city. For a long time fun-loving Miami has been on the receiving end of bad press, and the fair, since the early days, has suffered from varying quality. But over time the offerings have notably improved.

Art Basel Miami Beach (ABMB), which is taking place this week from 1 to 3 December, has become the most significant American fair in terms of quality but also in terms of its levels of participation, since this year it is hosting 282 exhibitors.

“Who could have imagined such an achievement?” exclaims Noah Horowitz, the new global head of Art Basel. “It took the tenacity of local collectors for this project to take shape. More recently, during the Covid crisis, many people from the tech world, investors, entrepreneurs, have moved to South Florida and have enriched the local ecosystem even more.”

The fair’s specificity lies in its total integration within the heart of the city. The art collector couple from Miami, Don and Mira Rubell, who made their fortune in the hotel industry, opened their collection to the public from the show’s very beginnings. Last year they inaugurated a new 9,300m2 site in the district of Allapattah (in addition to a 3,000m2 museum in Washington in October 2022). In Miami their space is a must-see for the majority of visitors to ABMB. (Don’t miss the video interview of Don speaking about the power of collectors in Miami and the talent of Alexandre Diop) 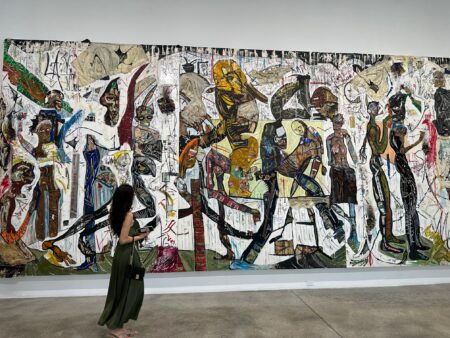 Over time they have proved their ability to “make” artists’ reputations.This is known as the “Rubell effect”: the quick valuation of new talents. This year the French-Senegalese artist who lived in Vienna, Alexandre Diop (born in 1995) was hosted by the Rubells for three months and is the subject of an exhibition as part of their collection.

His remarquable big paintings made of different textures could be seen as a cross between the work of Jean Dubuffet and Jean-Michel Basquiat, tinged with expressionism. His works are presented for around 150,000 euros at a gallery not far from the Rubell Museum, Spinello Projects. This is a high sum for an up-and-coming artist. Alexandre Diop has also been the subject of an exhibition this October at the Parisian philanthropic foundation, Reiffers Art Initiative (See here the  interview I made with Alexandre Diop). 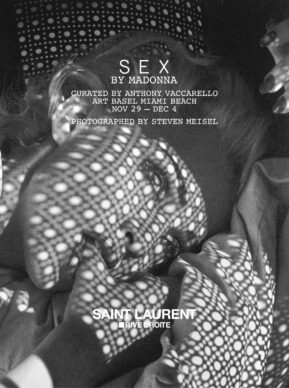 Over the course of the fair, in the Design District, which has developed considerably since the creation of ABMB, the fashion boutiques are staging art exhibitions too. But the most highly anticipated of the genre this year, dedicated to the images of fashion photographer Steven Meisel (born in 1954), is located by the sea at a temporary space built for the occasion by Saint Laurent. Meisel took all the shots for the scandalous book on Madonna published in 1992: Sex. 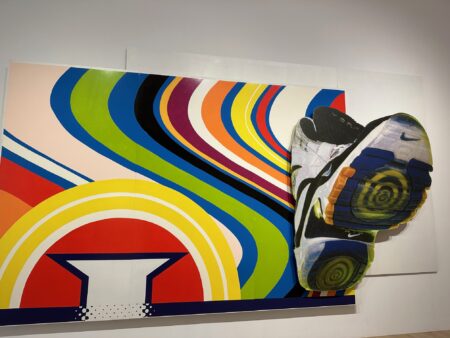 It was also the Design District which saw the opening in 2017 of the institution presenting the best contemporary art programme in the city, the ICA (Institute of Contemporary Art). Here we see an excellent exhibition dedicated to the Luxembourgish painter Michel Majerus (1967-2002), who died prematurely in a plane crash. His protean body of work revisits the stereotypes of consumer society. At the fair we find his works at the booth of Berlin gallery Neugerriemschneider. His prices oscillate generally between 50,000 and 600,000 euros. At auction, the record price for Majerus, obtained in 2022, is 797,000 euros. 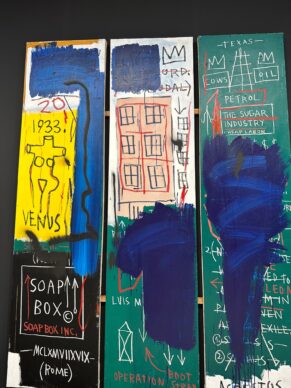 For the twentieth edition of ABMB the participants haven’t held back. At the booth of the Nahmad gallery, for example, we find an exuberant painting in three parts, painted in 1983 by Jean-Michel Basquiat (1960-1988) and on sale for 19 million dollars. Joe Nahmad, who directs Nahmad Contemporary in New York, explains: “The market continues to be very active, as shown by the auctions in November. At such a difficult time people are seeking security through the idea of investing in classic contemporary art. The same collectors are more and more interested in modern art and especially in surrealism.” 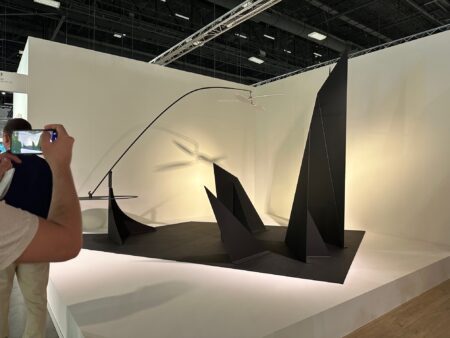 Among the most spectacular works at Miami Beach, the Gray gallery from Chicago has brought a Calder mobile measuring 4.3 metres long in black and white. Dating from 1962,this landscape sculpture is poetically entitled “Clouds Over Mountains” (on sale for 7.5 million dollars). 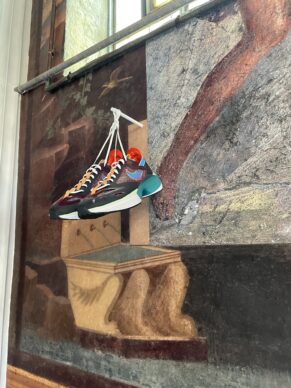 The Pace gallery has announced a work that was much talked about in the summer of 2022: bronze sneakers painted in trompe l’œil by Jeff Koons, which were part of his remarkable fantasy temple created on the island of Hydra (on sale for 750,000 dollars) (See here a report about the show in Hydra). They were not, however, exhibited at the start of the fair.

If Miami seems to exist outside of the conflicts and torments of the world, ABMB offers nonetheless a large number of political artworks. The multinational Continua gallery is exhibiting “Lost and Found”, an installation of 25 terracotta sculptures (on sale for 120,000 dollars) by Jonathas de Andrade (born in 1982). They are covered with swimwear that had been left on the beaches of Recife and collected by the Brazilian artist. A reference to the homosexual world made in a context, in 2020, when the president Bolsonaro was voicing open opposition to this minority. (See here an interview of Jonathas de Andrade). 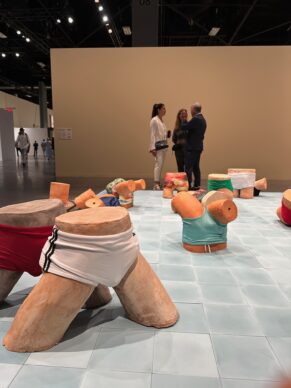 At the booth of Hauser & Wirth a large-scale painting from 2020 by the American painter Henry Taylor (born in 1958) depicts, in a spirit that seems nostalgic, the Obama couple (sold at the opening of the fair for 750,000 dollars) (See here a short interview of Henry Taylor). 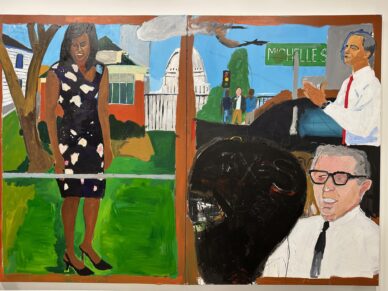 At the entrance to the gallery’s space there is a large neon work by another African American artist, Glenn Ligon (born in 1960). He works with words, which he draws in light. Here he has written AMERICA but has crossed out all the letters with the exception of M and E. This may be interpreted as the expression of an all too self-centred America. Miami has, nonetheless, been able to give him a warm welcome since the piece sold on the first day for 650,000 dollars. 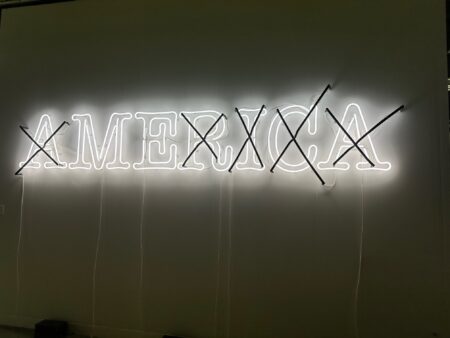 Lastly, among the surprises at the fair, at the booth of the British gallery belonging to Simon Lee we can see paintings by the French abstract painter Olivier Debré (1920-1999) (on sale for between 80,000 and 240,000 euros). This artist, son of the famous paediatrician who gave his name to a Parisian hospital and brother of Michel Debré, father of the constitution of the Fifth Republic, has had a fairly limited career in France. At auction, the record price for the artist went up to 327,000 euros in 2021.

His practice is linked to the lyrical abstraction movement, featuring the interplay between colours and the translation of sensations from nature. “He would often paint in the open air,” explains Simon Lee, who is in charge of the estate and intends to bring the artist to international attention with exhibitions planned at his spaces in London and Hong Kong. In June 2023 the Opera Bastille house in Paris will be presenting a show by the choreographer Carolyn Carlson inspired in 1997 by Debré’s giant paintings.

During these times the art market is revisiting history. In this vein, Paris’s Mitterrand gallery has brought a major ensemble of abstract sculptures to Miami Beach, mainly made out of wood, by Agustin Cardenas (1927-2001) (on sale for between 120,000 and 500,000 euros). The Cuban artist who came to live in France in 1955 and was championed by the theoretician of surrealism, André Breton, is due to see his market standing rise in the coming years thanks to a wave of institutional recognition currently taking shape from New York to Paris.

In times of uncertainty, demand turns to underrated talents from the past.