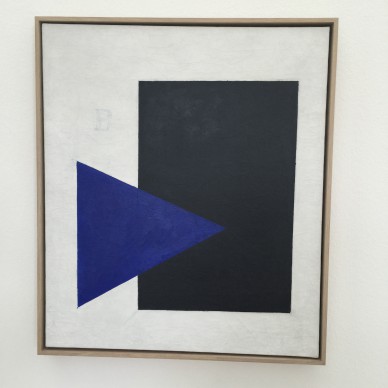 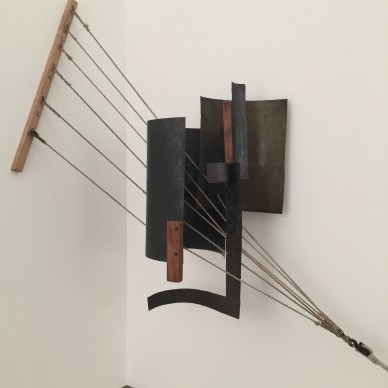 In December 1915, something major happened in Saint Petersburg, which was then called Petrograd—a small revolution that would disrupt the course of art history all the way through to the 21st century. People have tended to forget these events, simply because Russia soon became isolated within its authoritarianism, Communism and doctrine, and also because France became the epicenter of the modern art history legend.

And so, once upon a time, there was an exhibition financed by an artist, Xenia Leonidova Boguslavaskaya, and curated by another artist, her husband, whose name, Ivan Puni, soon became changed to Jean Pougny. This exhibition included 14 artists, half of them female. The Beyeler Foundation is now celebrating the 100th anniversary of this event, not by replicating the exhibition that was—impossible in any case, because documentation on the subject is lacking—but by re-creating the spirit of the time.

The Beyeler event is a grand performance that gathers together rare paintings from the world’s great museums (MoMA, Pompidou, etc.), along with works from private collections and museums located in the erstwhile Soviet Union’s provinces. The result comes across as a trip through what was then the most innovative art on the planet.

The breathtaking part of the exhibition consists of three rooms dedicated to Kasimir Malevich and Vladimir Tatlin. Here, everything announces the future: first, the movement that grouped these artists, Futurism; and then, the very title of the exhibition, which comes from Malevich himself: 0,10. The figure echoes like a premonition of what would be the language of computers. “For Malevich, 0 is the starting point for everything, and 10 is a symbol of the infinite,” explains Matthew Drutt, the exhibition’s American curator, who organized a notable exhibition devoted to Malevich at the New York’s Guggenheim in 2003. Finally, the works themselves open the way to two great 20th-century movements: to Dada with Tatlin on the one hand, and to geometric abstraction and minimalist art with Malevich on the other. The one thought haunting visitors confronted to such radicalism is a leitmotiv along the lines of: “How did they dare, or how did they come to, think of such things in the year 1915?”

Each artist, in his own way, categorically liberated himself from what representation in art could be. Malevich creates abstraction that doesn’t attempt to mean anything. He says: “When the mind’s habit of seeing depictions of corners of nature, Madonnas, and shameless Venuses in paintings vanishes, only then we see purely painterly works.” And so follows, in this notorious year 1915, his supreme Black Square on White Background, as well as an entire declension of simple colored geometric forms on monochrome backgrounds. For his part, Tatlin uses rough materials to make compositions in relief: “I’m waiting for well-equipped artistic ‘depots’ where an artist’s psychic machine might be repaired as necessary. I appeal to all those in my guild to pass through the suggested gateway and throw off the old to admit a breath of anarchy.” What can be done after these works? Their authors themselves never got over them. 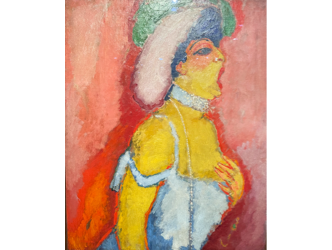