Carsten Höller: in Lisbon inside the belly of the whale, the artist plays with light and science

Carsten Höller is a man of experiences. That’s not to say he is particularly old, since the Swedish-Belgian-German artist – who speaks French very well – was born in 1961. But from his academic training as a phytopathologist (he has a doctorate in plant ailments) he retains an enduring desire to observe, and more than that: to experiment, preferably on humans. 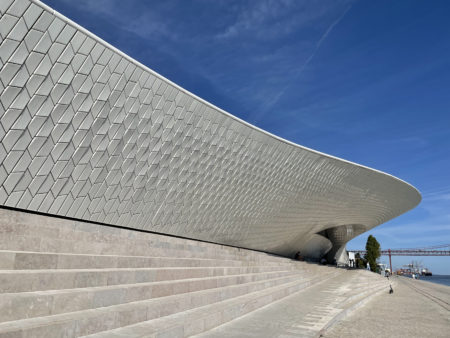 In Lisbon, in the remarkable white futurist architectural setting of the MAAT (Museum of Art, Architecture and Technology) on the banks of the Tagus, he is displaying all his experiments using light until 28 February under the evocative title: “Day”. 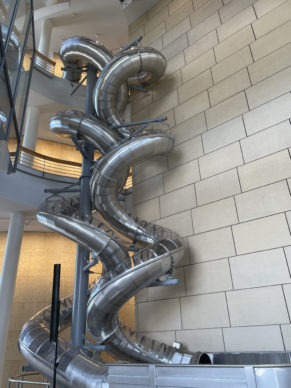 Carsten is an international contemporary art star. He has exhibited at the Tate in London; he conceived a “Double Club” for the Prada foundation (See here the report about the new building at the Prada Foundation), a nightclub that was half western and half African, allowing for a journey while remaining in a single place. He also features prominently at Maja Hoffmann’s Luma Foundation, inaugurated in June 2021 in Arles with, among others, his giant toboggan which gives visitors a feeling of regression and exhilaration at the same time… (See here the report about the Luma Foundation) 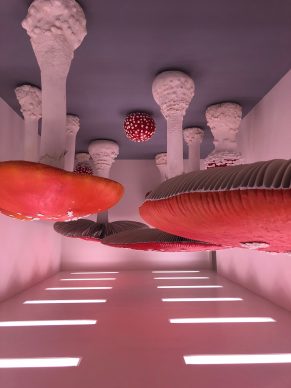 But the piece that made him famous was perhaps the one he presented at Documenta in Kassel in 1997 in collaboration with Rosemarie Trockel. It was a space split into two parts. On one side there was a nice evolving community of pigs, left to their own devices as though in a classic farm, and on the other side human observed one another and their animal neighbours. The message about nature and culture was already there. But everyone could interpret it however they liked.

That’s what Carsten Höller is like. His work is not instantly graspable. “It’s better that way, no?” he says coyly, like a young girl refusing to spend the first night with her prince charming. In Lisbon the central piece, “Lisbon Dots”, is a sort of giant game composed of luminous circles in different shades, projected, spotlights which travel by following visitors from their entrance into the space. You need to observe them for a while to understand that the circles interact when they cross one another. The colour blue is dominant and white is the ultimate reward. It’s a kind of XXL immersive game that works through rewards and punishments.

A sense of anxiety

To discover the next part of the exhibition you must pass through a passageway plunged into darkness. Visitors brush against each other. Hands rummage around. We realize we can take two corridors. The choice seems crucial. There’s a sense of anxiety. Thankfully the light appears at last. The visitor by now will have lost a little of their reserve.

Further on, if you book ahead and part with 200 euros, you can spend the night in one of the MAAT rooms, where there are two beds equipped with lights, activated by constantly moving robots. At their feet there are pencils that trace the diagram of your restless sleep. These whirling vortexes on the ground seem to indicate the variations in mood of the two occupants of this experimental bedroom. An allegory of the couple like in Jeanne Moreau’s song, “Le tourbillon de la vie” (The whirlpool of life) for the François Truffaut’s movie” Jules and Jim”.

Carsten Höller has thought of everything for his nocturnal visitors. He has even provided them with several types of toothpaste which would hypothetically allow them to influence their dreams. The composition is not specified.

The curator of the exhibition, Vicente Todoli, describes the “Day” experience as a “visit into the belly of the whale. It’s an encounter midway between a familiar world, made up of popular experiences, and a scientific world. With Carsten light is a physical sensation.” 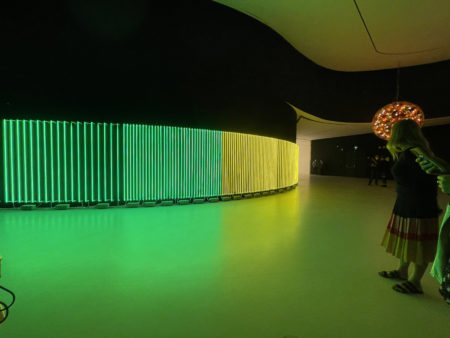 As for the artist himself, while he uses complex scientific data like certain luminous frequencies to create hallucinatory effects, he thinks more generally that science has failed. “If science is officially one of the means for understanding the world we must acknowledge its failure. Take the question of consciousness, for example. We see that the level of our knowledge on the subject is very limited. We know how to locate consciousness in the brain and to give it a frequency. We also know that consciousness stops when dreaming starts. That’s it. My work is against science. I prefer poetry.” 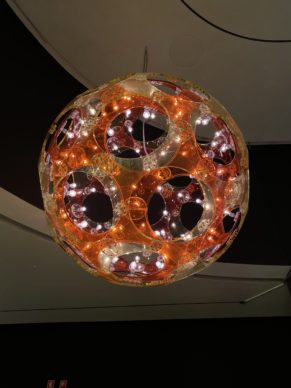 The experience of the luminous installations of Carsten Höller is a unique journey. A way of reconciling the hyper-technologization of the current age with the poetry of free spirits.

Naoshima : the Incredible Art Island Imagined by a Billionaire