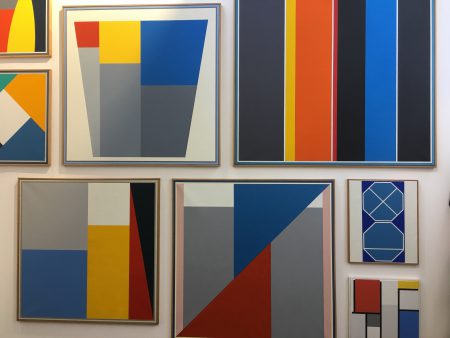 ‘It has to be said, there were a lot of young artists doing it for the money.

In recent years, we’ve seen the market go into overdrive for these precocious talents. Artists between 25 and 28 whose works were selling for 50,000 to 100,000 euros and more.

But the crisis hit this sector and now the trend is towards older artists whose commitment to art is beyond doubt. These are artists who have been creating for 40 years and over, with all that entails in terms of struggles and sacrifices.’

This statement is not from an old art dealer but from Daniele Balice, a Parisian gallerist and co-owner of the gallery Balice Hertling gallery who has made a career from discovering young artists including French artist Neil Baloufa (born 1985) whose work was recently exhibited at MoMA in New York.

This June at Art Basel Balice Hertling will present the work of Stephen Willats (born 1943), one of the fathers of English conceptual art, known (and since forgotten) for documenting the London underground during the Thatcher years.

The works, documents, furnitures and clothes used in performances will be on sale at the Swiss fair for around £25,000.

In Brussels, Rodolphe Janssen, one of the most famous galleries in the local contemporary scene has just begun representing Léon Wuidar (born 1938), the geometric abstract painter associated with the “mouvement de l’Art Concret” and  member of the Académie des Beaux Arts whose work has never sold much.

‘The market constantly demands new work. You can stumble across stocks of works, as in this case, and do research and recontextualization work,’ explains the gallerist.

Emmanuel Perrotin is opening his new gallery in Japan on 7 June with a Pierre Soulages exhibition where works will be selling for between 40,000 and 1 million euros.

‘Having access to Soulages’ work is a privilege. Over a 70-year career he painted 1,600 canvases and I’m on my second exhibition with him. These kinds of artists allow you to deploy special strategies. For instance with Hartung, where the market is somewhat sluggish, we’ll show him at the Basel fair in collaboration with the Simon Lee Gallery.’ The works will be priced at between 80,000 and 350,000 euros.

There’s a long list of small and large galleries who are attempting to bring back overlooked or underrated artists.

Take the ‘spoils of war’ from the great American painter Philip Guston (1913-1980) at the multinational gallery Hauser & Wirth, or one of the key players of Bauhaus and later Black Mountain College, the German Josef Albers (1888-1976) at that other international gallery David Zwirner.

According to a study carried out by Artprice (scroll down for the table of figures) the rankings of artists born before the Second World War either living or who died in the past decade show extraordinary price increases at auction.

Lee Ufan (born 1936), another Korean artist represented in France by the Kamel Mennour Gallery, has seen his auction sales rise by 3832%.
It is easy to imagine that an auction house like Sotheby’s has been keeping a close watch on this phenomenon.

He’s recruited Christy MacLear, Rauschenberg Foundation CEO until last year, to work at the heart of his agency, managing the work of recognised but under-rated artists, assist them in establishing foundations, as well as manage the estate of deceased artists.

Christy MacLear outlines the responsibilities of her previous role at the Rauschenberg Foundation:

She underscores that it is her wish to remain highly selective: ‘Thirty to forty families have already contacted us.’

Christy MacLear speaks about her new role at the heart of Art Agency Partners.

Among her new clients in the living category, she mentions Vito Acconci(1) and Acconci Studio. ‘We are working to help plan his estate and consider the use of his archives and legacy.’
In terms of estates, she mentions contracts signed with three clients, or to be more precise Roy Newell  ‘an Abstract Expressionist painter who was friends/colleagues with de Kooning and Pollock. He, however, had the temperament of Clifford Still – a bit more sceptical about engaging in the commerce of the art world and gallery system thus had little scholarship or museum placement.

On a separate note, she swears that in her contract it states that she has no direct link to Sotheby’s auction houses. ‘When I discussed my new role I was very clear about my independence with respect to auctions.’
Some dealers are less convinced, since Allan Schwartzman oversees both Art Agency Partners and Sotheby’s contemporary auctions.
At a time of political and economic uncertainty  it’s obvious that these artists, whose body of work is known more or less entirely, regardless of their level of recognition, offer enviable financial security.

(1)Vito Acconci passed away this morning, 28 april, at the age of 77 as I was posting the report