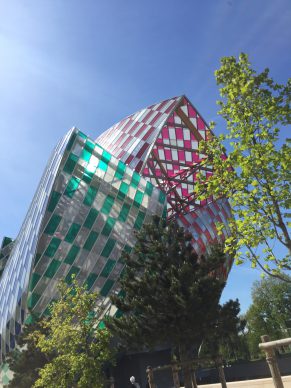 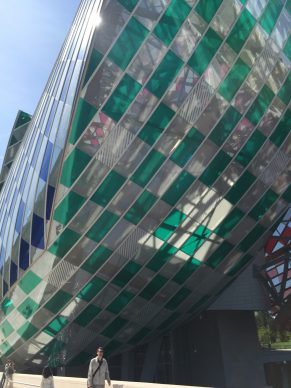 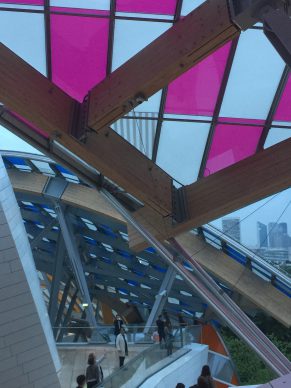 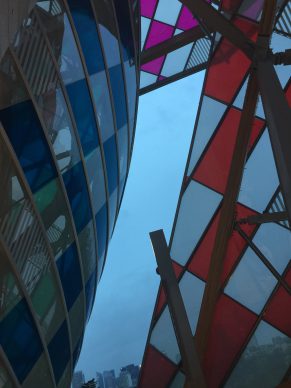 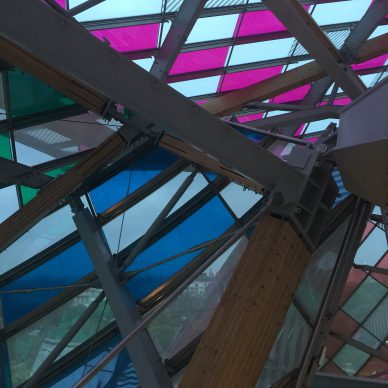 In the Bois de Boulogne in Paris, there’s something different about the scenery. From the distance, it’s a bundle of colours criss-crossing in strange patterns that you first notice. Up close, the colossal object is breathtaking. The roof of the Frank Gehry-designed Fondation Louis Vuitton soars 42 metres into the sky.

For several days now it has been covered with a multi-coloured filter whose design has been dreamed up by French conceptual artist Daniel Buren. Buren has been producing work partly based around his signature vertical stripes since 1966. At the Fondation Louis Vuitton he’s covered 1,800 glass panels out of a total of 3,600 on the spectacular roof with a coloured motif using 13 colours. It took the team of  10 climbers who ordinarily clean the complex glass roof 29 nights to install the work.
On closer inspection, it is made up of criss-crossing lines and polychrome contrasts in three dimensions. Buren discloses that one of his favourite paintings is the Battle of San Romano by Paolo Uccello completed in around 1456 and which is usually found hanging in the Louvre. Uccello’s spears make a reappearance here on the roof of the Fondation, unless what’s involved are the stained glass windows to a contemporary temple.

At the foot of the building, children wander through the garden. A small, slender girl stops her mother, who is gripping her hand tightly, to point out the multi-coloured reflections that bathe her feet. Daniel Buren confirms: ‘The children always notice it before everyone else.’ Buren believes that the ever-changing Paris sky plays with the work. While there’s no denying he’s an out-and-out conceptual artist, this history of art aficionado is still sensitive to the changes of weather, for instance, like the Impressionists as Claude Monet before him.

At 78 years old Daniel Buren who, among other landmarks, filled the entire Guggenheim Museum in New York in 2005 and also had a major exhibition in Paris in 2002 on all the floors of the Centre Pompidou, looks back over his career without a trace of nostalgia:

He describes the project at the Fondation Louis Vuitton:

‘The twelve “sails” on the roof, as Frank Gehry calls them, are covered with transparent coloured filters. They project light onto the surroundings. You’re enveloped by this enormous parasol that reflects its colours on the floor and even on the visitors. Imagine 13,600m2 of glass projecting the tints arranged horizontally and vertically. Here the sun does 50 per cent of the work.’

He reveals how this project was conceived:

‘My work always consists of an ‘in situ’ intervention or, in other words, in terms of the location. The origin of the project, in fact, stemmed from a request by Frank Gehry about three months before the Fondation Louis Vuitton opened. He wanted me to do something with what he termed “the sails” and the terraces. He had flags in mind. I couldn’t see what I could do with the idea of flags. I replied quickly that if he gave me permission to work directly on the glass of the sails, there was scope to come up with something interesting. This covering of sails is the most successful part of the Foundation’s architecture. You can chance upon it when visiting the space. It surrounds the museum. The amusing idea consists in providing the possibility of being at once inside and outside the building. But first it was necessary for the public to get used to the building, for the architecture to take its place in the landscape. That’s why we programmed the project for May 2016. It is envisaged to last a year so you can see it evolve under the light of each season.’

Lastly one of the most surprising sides to this artist is his inflexibility towards the art market. Since his debuts, he’s systematically insisted from his galleries (presently these are Stefania Bortolami in New York , Xavier Hufkens in Brussels and Kamel Mennour in Paris) and even from the museums in which he’s exhibited for remuneration or asked them to acquire a work of his.

Unlike young artists today who want to sell their art at all costs, he has been highly opposed to certain sales of his own work when they were initially conceived as site-specific. He says: