There’s one thing that both wine and art have in common. In countries with long wine growing traditions like France, the wines considered the best have a ‘long finish’. In other words the flavour lingers, it takes time to fully appreciate. On the other hand American wines, even the best ones, have a ‘short finish’: they deliver their taste in one go. American contemporary artists are likewise prized for their immediate visual impact. There is, however, at least one exception to the rule.

Jennifer Allora (born in 1974) & Guillermo Calzadilla (born in 1971) are some of the most gifted artists to currently grace the American scene. The issues they deal with are often political and their work does not always have an immediate visual impact.

Having said that, this artist couple who live in Puerto Rico – a US territory with a hybrid system where citizens don’t even have the right to vote for in the presidential elections – were chosen to represent the United States at the 2011 Venice Biennale with the endorsement of the then Secretary of State, Hillary Clinton. Their intervention on that occasion left  a strong impression. Especially with their athlete running on a treadmill on top of a gigantic tank outside the Biennale pavilion, which encapsulated the American spirit.

‘Since the spirit of Biennale resembles, in a certain way, the Olympic Games of art, we decided to employ someone who was accustomed to representing their country in competition,’ says Jennifer Allora on the subject of the athlete.

As we speak, 30km outside Paris, the  administration of Royaumont Abbey, a former Cistercian monastery some 800 years old, has engaged the duo for a series of film installations.

The messages are less abrupt. No overt political content here. Instead there are birds, poetry, ancient sculptures and music played on an archaic instrument.

‘It was a necessity for us to become more opaque. Nowadays the media puts artists in pigeonholes and we don’t want to be placed in this category or that category. We want to show the full extent of our interests,’ says Jennifer Allora while visiting Paris.

She discusses the content of her videos on show at Royaumont:

But also the different forms their work takes.

With these two artists, the work produced has a distinctive signature, even though they are two different people, with differing educations and of the opposite sex. How did this artist coupling come about?
She explains:

Without any prompting, Jennifer broaches the issue of a piece that sparked a huge controversy: ‘Puerto Rican Light’, a work located in Puerto Rico and commissioned by the Dia Foundation. It is on display until 23 September 2017.

‘Philippe Vergne, at the time when he was still in charge of the Dia Foundation, commissioned an off-site piece. Not since Joseph Beuys in the 1980s had Dia done something off-site. In 1965 Dan Flavin named one of his neon pieces ‘Puerto Rican Light. Dedicated to Jenny Black’. We tried to locate this lady, who was an assistant at the gallery where he was exhibiting and who nowadays runs a bed and breakfast on Long Island.

She told us how when he installed the neons, she’d exclaimed ‘it looks really Puerto Rican’. It was a stereotype about a territory that had witnessed a flood of cheap labour into New York. We decided to transfer this ‘Puerto Rican Light’ to a cave in Puerto Rico. Dia, through Phillipe Vergne, played along. It took a year to regulate the constant humidity in this place in the middle of a nature reserve. The neons are powered by a system of solar panels. It’s the Puerto Rico sunshine that feeds ‘Puerto Rican Light’.

Dan Flavin’s estate, through the figure of his son Steven, does not approve of our concept. We’re not authorised to photograph the work in the cave.’

To get to the cave, it takes serious dedication: two hours by car from the capital San Juan, then an hour’s walk in the nature reserve, having passed through disaffected industrial sites resembling those landscapes that the German photographer couple Berndt and Hilla Becher were so fond of. Only six people per day are allowed to make the excursion. ‘It’s like a pilgrimage. We want the experience to remain intimate,’ explains Jennifer.

The work recalls the idea behind Flavin’s installation in one of Dia’s Bridgehampton spaces, a wooden house that resembles a chapel. It’s a secular, mystical experience.

The work of Allora and Calzadilla demands meditation and in-depth analysis. It’s an antidote to the spirit of the age, sick with its own superficiality. Never enough time…

So a pat on the back if you made it to the end of this article. 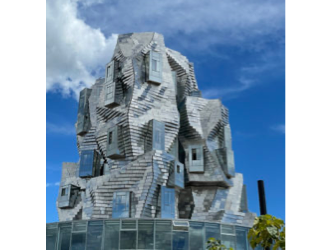