There is one school of contemporary art, going back to Marcel Duchamp, that involves playing pranks and ridiculing everything encountered in this absurd world of ours.

You could be led to believe, on first appearances, that Scandinavian artists Elmgreen and Dragset, whose work includes installing a Prada boutique shop window in the middle of the Marfa desert in Texas, are members of this club, but you’d be mistaken.

As we speak, they just had a major exhibition at the Tel Aviv Museum( it ended on 27 august)  that offers a very subtle glimpse of their relevance. Michael Elmgreen (born in 1961) and Ingar Dragset (born in 1969) present their propositions in whispers.

It is an art of understatement, for whoever wants to listen, but frequently using familiar figurative forms.

In Tel Aviv, for instance, the largest installation in the exhibition was a wall. As you draw closer, you perceive that it refers to the wall that divided Berlin before they moved there.

Behind the wall, a small boy is sat on a balcony.

But on the subject, the artists themselves don’t say a thing.

Elmgreen and Dragset often provide an experience of solitude and isolation. ‘A pedestal in the desert,’ Michael emphasises.

‘We work through allusion. The audience will make the connection. If you’re looking to create a confrontation, you end up stifling dialogue. You show your own opinion but you block the next step in the process.’

I met up with the pair at their studio in Berlin. It’s an immense former water treatment factory that has kept its vertical structure, its moving platforms and its vertiginous staircases, but refurbished with a high degree of comfort.

This coming Saturday, for one day only, Elmgreen and Dragset will be taking over the nave of the Grand Palais in Paris.

Michael Elmgreen spoke  about the project, which involves installing the very same stand which their gallery in Paris and HongKong, the Perrotin Gallery, will be installing one month later in exactly the same spot in the nave of the Grand Palais.

It’s a one-day fair featuring a solitary stand in the middle of the vast, empty nave of the most beautiful space in Paris.

The artists previously installed a fake art fair at Ullens Centre UCCA in Beijing a few months back, where each of the visitors received a VIP card which granted access to nothing at all. The fakeness of privileges.

‘We often get asked if we’re not bothered about seeing our work exhibited in fairs. So we transformed our work itself into a fair.

We are part of the system. We  want it to change so we challenge the format of the fair.’

Michael adds, ‘When I was seven years old, I was already furious when I saw my parents decorating the Christmas tree each year in exactly the same way. That element of surprise no longer existed.’

From 1 October Elmgreen and Dragset will also be exhibiting in New York as part of the Flag Foundation, a private foundation on 25th Street.

Finally, next year, before their show in October at the very beautiful space that is the 18th-century Hôtel de la Monnaie in Paris, in September they will be curating the Istanbul Biennale.

‘We spoke with numerous people in Turkey. They were unanimous in saying that it absolutely has to take place. They feel isolated. It is important to engage and provide new perspectives. We have to be more intelligent than the censors.

We have to address political subjects but also existential subjects, to re-establish the link with the international community.

Elmgreen and Dragset present their propositions in whispers. 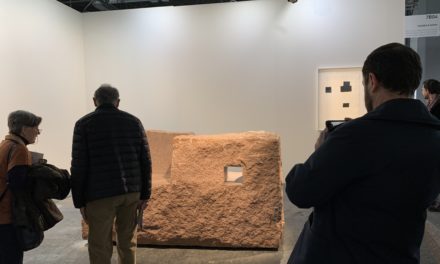