There can be no doubt that African contemporary artists are currently in vogue. This is generating a rapid promotion not just of those who are truly talented but also of painters who are repeating a tried and tested formula: portraits, bright colours, contrasting patterns. According to Katya Kazakina from Artnet News, artists who don’t even have galleries yet are attracting strong speculation at auction. She points out that those born after 1974 generated sales of up to 40 million dollars under the auctioneers’ hammer in 2021, up from 7.5 million in 2019.

Far removed from this financial turmoil, there’s a great African master who paved the way brilliantly for current art on the continent and is making a major comeback in 2022.

The exhibition is curated by Ugochukwu-Smooth C. Nzewi, who justifies the staging of the exhibition: “Frédéric Bruly Bouabré was a consummate visionary who imagined and created an interrelated world in several thousand works on paper and hand-written manuscripts. World Unbound is the first in-depth survey in the United States of the career of this remarkable but under-recognized artist and offers MoMA’s audience an exciting opportunity to explore his drawing practice. Bouabré’s infinite curiosity about the world that we live in, his attentiveness to the beauty in human diversity, and in affirming the common ties that bind us all as citizens of the world are ideals that are especially resonant amid today’s uncertain times.”

Bruly Bouabré draws his inspiration from a divine apparition he claims to have had in 1948. From that point on he decided to depict and catalogue different facets of the world through his artistic creation. This takes the form of countless small drawings the size of a postcard, accompanied by maxims, always following the same format.

When he first started out he would draw on pieces of cardboard salvaged from hairdressers, where they were used as packaging for false hairpieces. In this way Bruly Bouabré developed a universal alphabet inspired by his native language, Bété. It comprises 449 drawings made using pen and coloured pencil, the largest series he ever did, a 1990-1991 version of which will be on display at Moma. Between 1987 and 2008 he also made a series entitled “La vie quotidienne”, and there are books listing his various interests that can be discovered at Moma too (1).

The artist was noticed during preparations for the legendary exhibition which took place at the Centre Pompidou in 1989, “Magiciens de la terre”. Orchestrated by Jean-Hubert Martin, the exhibition was pioneering in the sense that it was open to artists from all over the world.

It was one of the curators, André Magnin, who discovered Bruly Bouabré in Abidjan. “I remember this event that changed my life. It was 11 April 1988. We were on his land. He told me, ‘I’ve been making drawings’. He comes out of his room with a big bag filled with papers which he lays out on a mat. That’s when I knew this was something extraordinary,” explains André Magnin, who these days has a gallery in Paris on Boulevard Richard-Lenoir, Magnin-A. “When I met him he was retired. He’d been a sailor, a librarian… Each of his drawings is a statement of knowledge. He used to say: ‘I want to be part of Picasso’s pantheon’. At the time we showed 300 drawings, without completely understanding the content.”

Later, thanks to his various exhibitions around the world, Bruly Bouabré would maintain close ties with several major artists from our age, such as the enigmatic American artist David Hammons (born in 1943), currently exhibited at the Pinault Collection, the Japanese conceptual artist On Kawara (1933-2014), and the now legendary Italian artist Alighiero Boetti (1940-1994) who said of his work: ‘an essential language is spoken there’.

Since then André Magnin has put together an ensemble for the biggest collector of African art in the world, Jean Pigozzi (See here an interview of Jean Pigozzi about his collection). And in 2019 the latter also made a donation to Moma, composed of 45 African artworks and including Bruly Bouabré’s Bété syllabary.

The fashion designer Agnès B, another lender to Moma, was also an early collector of Bruly Bouabré. “The encounter was a real shock. Then we displayed his work at Galerie du Jour. There was a strong reciprocal attachment. Frédéric wrote to me telling me I was like a daughter to him.” These days Agnès B’s Galerie du Jour is housed within the walls of La Fab, the endowment fund inaugurated in 2020 by the designer in Paris’s 13th arrondissement. She is presenting drawings by the artist on sale for 1600 euros each (See here another interview of Agnès B).

It seems clear that the Moma exhibition, by shining a light on the thinker/artist’s work across the Atlantic, will potentially draw in the collectors once more. But his market is fraught with obstacles. The first stems from the scarcity of pieces which for a long time have no longer been sold as series. This, however, is the idea behind the thematic cataloguing which best encapsulates his work.

Next, and by no means least, there’s the proliferation of fakes. According to André Magnin: “He made 5000 or 6000 drawings. But since his death not a day goes by without series of drawings cropping up at galleries, at auctions, all over the world, made in his style but which don’t have the meaning that Bruly was able to introduce us to. It’s become a factory”.

For the time being it doesn’t seem like the market knows how to differentiate between the real drawings and the fake ones. In future the pedigree of each one of these artistic and moral postcards will make the difference. At auction, the results are inconsistent. According to the Artprice database, the record price – obtained in Marrakesh at Artcurial in 2017 – was for a paper from 2010 auctioned for 58,500 euros. But in 2018 Sotheby’s sold a series of 42 drawings from the same year for 46,000 euros, bought, according to the catalogue entry, directly from the artist.

Bruly Bouabré used coloured pencils in faded tones. But according to André Magnin, towards the end of his life he would ask members of his family to colour in the drawings he made. Yet it’s clear that the overly garish colours, like we see now on the market, do not make up part of the artist’s spirit.

The horsefly and the blood 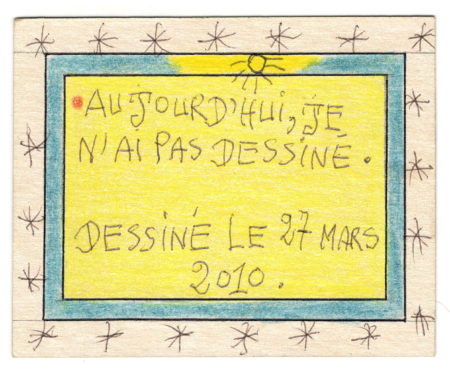 In 1999 Sotheby’s auctioned artworks from Jean Pigozzi’s collection, including a drawing by the Ivorian master dating from 1991, featuring a large fly accompanied by the line: “Sous le ciel bleu, sortant de la verdure, le “tan” suce le “sang humain” (‘under the blue sky, emerging from the green foliage, the ‘horsefly’ sucks ‘human blood’). This little drawing, with perfect provenance, was sold at the time for 6678 euros.

To paraphrase Bruly Bouabré, we might say that these ‘horsefly-forgers’ are sucking the lifeblood out of and corrupting the oeuvre of one of the major African artists. Let’s hope that in the near future market operators will learn how to differentiate between words written by this great thinker and the garish labels that have been cooked up by forgers since his death.