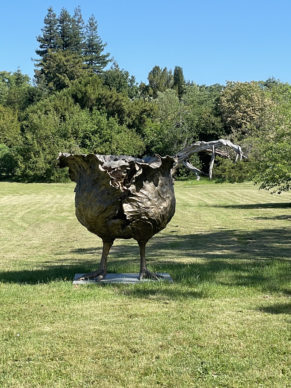 An english style garden in Versailles

No one has been able to top Stefan Zweig in his descriptions of the deliberately laid-back luxury of the English-style gardens desired by Marie-Antoinette in the biography he wrote about her. He describes her wonderland, the Trianon at Versailles, where she was able to play out her fantasies far from the formalities of the court.

Despite the impact of the French revolution, the spirit of the Trianon – miraculously – lives on today. And until 1 October it will enjoy a remarkable resurgence into the contemporary period with the summer exhibition, decided on at the last minute by the president of Versailles, Catherine Pégard.

In collaboration with the gallerist Jean-Gabriel Mitterrand, she has organized an exhibition at the heart of the Trianon park featuring around sixty artworks by François-Xavier (1927-2008) and Claude Lalanne (1927-2019).

These artists/designers, who specialized primarily in depicting fauna and  flora, could not have found a better setting in which to showcase their world. The long walk through the series of gardens up to the Queen’s Hamlet is perfectly dreamlike. Around the corner of a grove of trees, in the middle of a lawn, on the edge of a fountain, we find their plants and animals made from bronze and stone, which only serve to accentuate the magic of the location.

According to Jean-Gabriel Mitterrand nothing here is for sale; the pieces mostly come from the artists’ family and from private collections.

Simultaneously, the small but well-known Massachussetts museum, the Clark Institute in Williamstown, which is above all famous for its collections of Italian Renaissance art and its Impressionist treasures, is also exhibiting the Lalanne until 31 October.

“They are heirs to surrealism,” explains the establishment’s French director Olivier Meslay, a former curator at the Louvre. “These are sculptures you can interact with, and that is truly a rarity. The people who visit our exhibition are very happy. Especially the children…”

Jean-Gabriel Mitterrand, who worked with the Lalanne couple from 1975, believes they have expanded beyond the realm of design: “Of course they are part of the great tradition of the French decorative arts. This is part of what their fans appreciate. But their creation extends beyond that. It is animated by a real spirit, close to nature.”

He says for example that Claude “reinvented” the technique of electroplating, the process of applying metallic parts to the plants she created, using a great deal of craftsmanship. “Initially, when we would ask for one of her famous ‘choupattes’ (‘cabbage feet’), a cabbage on top of chicken’s legs, she would reply, ‘I can’t right now, I don’t have any cabbages in my garden.’”

Later the ‘choupattes’ were made in different sizes, including one in XXL that is on display at Versailles. Another similar one, conceived in 2012 and measuring 1.3m tall, was sold at auction in 2019 for the all-time record price for Claude Lalanne: 2.1 million euros.

It was part of the “L’Univers Lalanne” sale organized by Sotheby’s in Paris. On this occasion the 244 lots – comprising part of the stock from the couple’s studio located at Ury near Fontainebleau – were sold for a total of 91.3 million euros.

Since then, undeterred by the public health crisis, the prices for Lalanne have continued their prodigious rise. At Christie’s on 10 June 2021, a single table by François-Xavier, which was commissioned in a double set by a wealthy lady from Palm Beach called Sydell Miller, with an estimate of 830,000 euros was sold for 5.4 million dollars. The model – only four other copies exist, according to Christie’s – is composed of a herd of seven elephants in gilt bronze, surrounded by trees holding up the tabletop. “I sold them nineteen years ago for the equivalent of 84,000 euros,” recalls Jean-Gabriel Mitterrand.

For now, the record price for a single piece by François-Xavier Lalanne is still held by “Les autruches-bar”, an eccentric bar made between 1967 and 1970 composed of two ostriches made out of Sèvres porcelain balancing an egg, which in fact conceals an ice bucket. For a long time the piece belonged to the famous interior designer Jacques Grange, who sold it for 6.1 million euros when his collection was auctioned in 2017 (See here an interview of Jacques Grange about Les Lalanne). It was bought by the Mavrommatis family, who are currently exhibiting it at Versailles.

For Cécile Verdier, president of Christie’s France and a design specialist: “We have been observing a Lalanne boom for around ten years now. It is a totally global market.

Lalanne has become a worldwide brand, like Picasso. Nature that is imposing in its monumentality.” And although their field seems to be very technical, with its editions from different dates and in different formats, “the collectors operate without differentiating too much, from the heart.”

Today the stone sheep created by François Xavier – with a huge flock now scattered across the entire world – bring the lawns of rich collectors to life, who have seen their prices double over five years, according to Cécile Verdier. On 1 June Christie’s sold a stone sheep for 325,000 euros. That same day the auction house also sold the indoor version, covered in wool and mounted on wheels, for 860,000 euros.

So has the Lalanne output become a product that attracts speculation? “Yes, similarly to other creations such as the paintings of Jean-Michel Basquiat, for example,” concludes Jean-Gabriel Mitterrand.

Antique Chinese art: the military confiscations and French occupation in China drive the market in Paris