Proust on his deathbed

In his studio opposite his desk he has displayed the reproduction of a portrait of Marcel Proust on his deathbed. The French-Lebanese artist Ali Cherri (born in 1976) talks about how when he was a teenager in Beirut this image followed him everywhere. “He has an air of serenity,” he says, describing the dead man in profile, his eyes ringed with large dark circles. 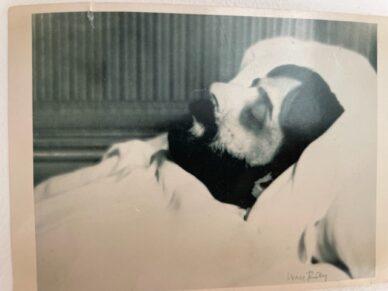 Death is omnipresent in the artist’s work but always with an air of romanticism, in the style of a 21st-century Caspar David Friedrich. “There’s this idea of finitude that’s always there in my head. You learn to live with it,” explains the artist, who grew up in the midst of Lebanon’s civil war. 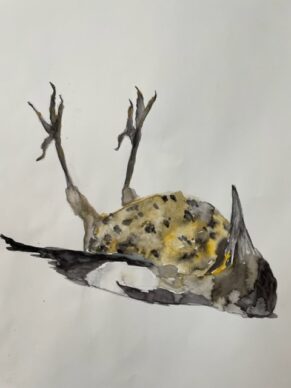 Ali Cherri considers himself above all he creates videos, but he also practices watercolour and sculpture. He was recently the subject of an extraordinary accolade. It is very rare for a visual artist to also succeed in the world of cinema.

In June 2022 he was selected to screen his first feature film, “Dam”, during the “Quinzaine des réalisateurs” (directors’ fortnight) at the Cannes Film Festival, which is designed to seek out new talent. The film, which received a lot of attention, will be released in cinemas in France in January 2023 and before that it will be showing at twenty-odd festivals around the world.

Ali Cherri is accumulating recognition. At the Venice Biennale, which is taking place until 24 November, he received a Silver Lion for his participation in Cecilia Alemani’s international exhibition “The Milk of Dreams”, awarded to a “promising young artist” because, according to the jury, it was an “interdisciplinary and multilayered presentation that takes a meditation on earth, fire and water from a constructive perspective to a mythical dimension” (See here the interview of Cecilia Alemani and here the report about the Venice Biennale).

Ali Cherri is showcasing a contemplative video at the Arsenale displayed across three giant screens, “Of Men and Gods and Mud”. It addresses, from an individual and human perspective, the subject of men working on the construction of a hydroelectric dam in North Sudan, specifically in Nubia, the region known as the Land of the Black Pharaohs (which is currently the subject of an exhibition at the Louvre).

“The Merowe dam is probably the most destructive in the world in environmental and human terms,” explains Ali. The main character in the film is a seasonal worker who spends his days making clay bricks. 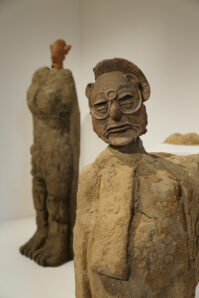 At night he imagines figures from the clay which transform into deities. These sequences were filmed in 2019. Because of Covid the artist didn’t return to the Nubian region until 2021 to film his fictional piece in a more linear format featuring a real seasonal worker, Maher, as the hero, who even subsequently travelled to Cannes. Both formats were worked on in parallel. 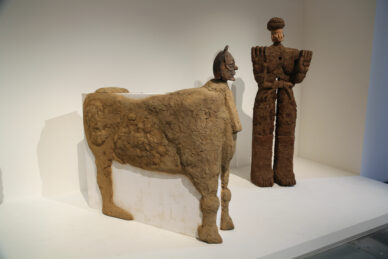 Simultaneously, Ali has given form to these deities made from clay. They are exhibited in Venice right next to the screening room. “Humanity tends to envisage the mixing of earth and water as a beginning. It’s the founding myths of Adam, Gilgamesh, the Golem… I was inspired by it.

I made bodies out of earth consolidated by fixative, which I assembled with model heads that I bought at antiques auctions at Drouot. I like the idea that these objects rejected by the market are seen as valuable and desirable again. These heads, because they are cracked, or not beautiful enough, will now be once more part of a dominant story.” 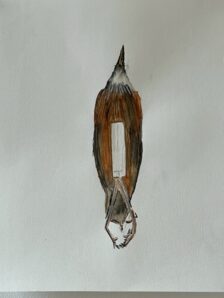 At Ali Cherri’s studio we see large crates filled with antique objects. On the walls there are little watercolours of dead birds, inspired by taxidermy specimens. He started painting them during lockdown. “Taxidermy is a way of thinking about death,” he explains. 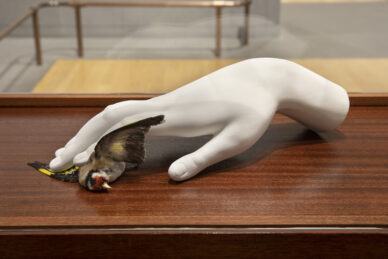 An old box is filled with porcelain artificial eyes from the 19th century, which were used to create a sculpture displayed at the National Gallery in London where he was artist in residence until 12 June 2022. His intervention focused on the vandalism of five artworks from the permanent collections. This gave rise to five installations presented in glass cases. “I consulted the museum’s archives. The public saw these acts of damage like wounds done to human bodies, but the museum later didn’t recount any of that.” 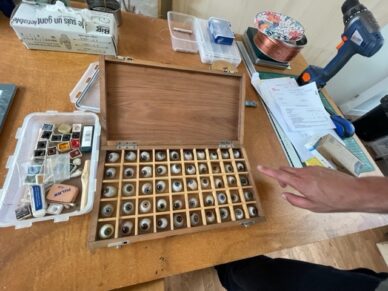 More broadly the artist observes: “violence becomes something invisible, but it is inscribed in the elements, in water, in people’s bodies.” By evoking these buried subjects we heal them.

Ali Cherri is subtly healing in a world filled with trauma and pain. As the philosopher Hannah Arendt said: “artists are the only ones who still believe in the world.” And fittingly, above his desk just alongside the photo of Marcel Proust on his deathbed, Ali Cherri has placed a portrait of Hannah Arendt. 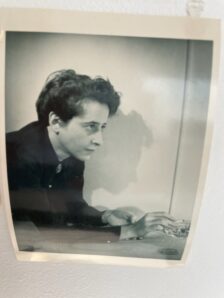