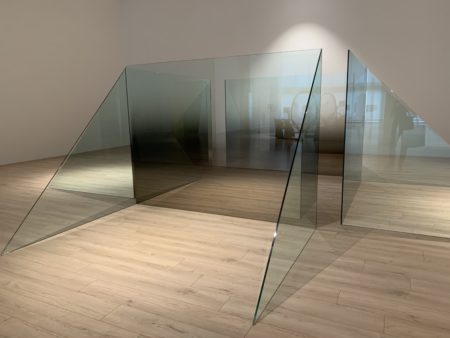 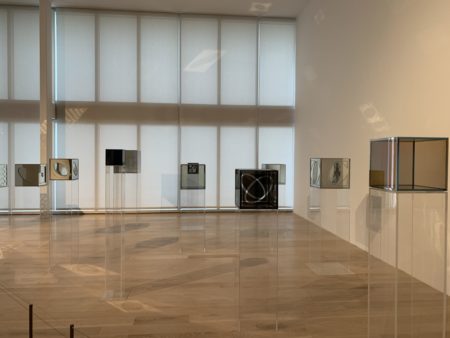 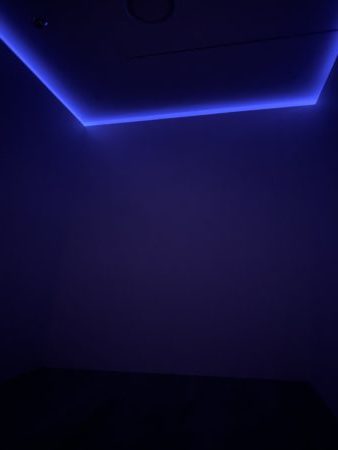 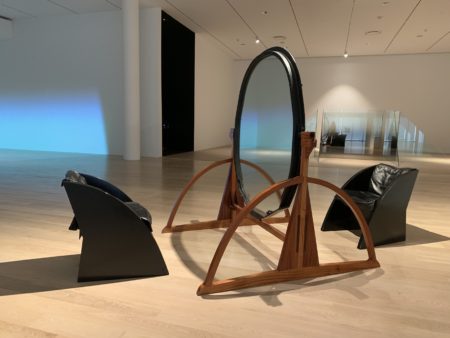 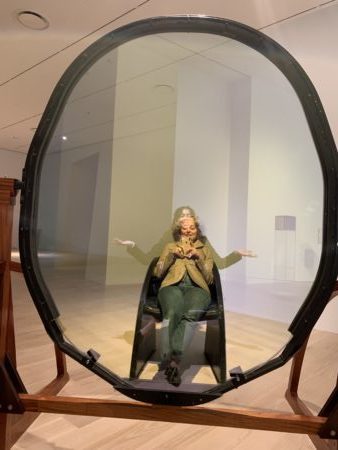 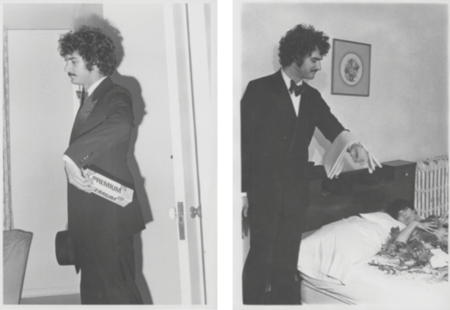 It’s always helpful to classify an artist in terms of a school, to put them in a box. But good artists can’t be pigeonholed. They’re seekers, and in the words of Picasso in fact they don’t seek, they find.

Larry Bell (born in 1939) has found many new things through playing with light, as was shown in his excellent exhibition at the ICA in Miami until 10 March 2019.

The most beautiful installation, in which a woman bathing appears in a rainbow, is more reminiscent of the Pop Art of Richard Hamilton in its iconography, or even of Degas if we go back further, than minimalism.

In fact, in my filmed interview with Larry Bell he explains “I never thought of myself as a minimal artist. They were too many other aspects in my work than Minimal”.

He even talks about how contrary to commonly held views, Donald Judd – whom he knew well – didn’t consider himself to be a minimal artist either.

I cannot resist reproducing Jan Tumlir’s opening phrases from the text he wrote under the title “Vapor Trails” for the ICA catalogue, which is due to be published shortly by DelMonico Books and Prestel, because they provide a good summary of my own perception of this artist. He doesn’t take himself too seriously, he’s a free thinker, but he passionately pursues certain dreams:

“In 1971 Ed Ruscha made a twenty-four-minute 16mm film titled Premium that features Larry Bell in the leading role. The plot is derived from an absurdist sketch by Ruscha’s childhood friend, the artist, musician, and comedy writer Mason Williams, and it has to do with the realization of a rather elaborate sexual fetish––or so it at first appears. In a low-rent hotel room, a man (Bell) covers a bed in salad fixings, and then convinces an attractive woman (the model Léon Bing) to lie in the salad, drenching her body in oily dressing. Suddenly realizing he has forgotten the crackers, the man leaves the room to procure this key ingredient. (…) Bell appears in the film as a representative of the “L.A. Look,” as it had become known right around this time. (…)

The L.A. Look refers generically to cool, semitechnological, industrially pretty art made in and around Los Angeles in the sixties by Larry Bell, Craig Kauffman, Ed Ruscha, Billy Al Bengston, Kenneth Price, John McCracken, Peter Alexander, DeWain Valentine, Robert Irwin, and Joe Goode, among others. The patented ‘look’ was elegance and simplicity, and the mythical material was plastic, including polyester resin, which has . . . an aura of difficulty and technical expertise. . . It has, in short, the aroma of Los Angeles in the sixties––newness, postcard sunset color, and intimations of aerospace profundity.”

In the interview I conducted with Larry Bell he talks about his youth spent at Venice Beach.

But in the catalogue he discusses the genesis of his glass work in a more technical way:

“I didn’t know what I was doing: I was making these little boxes that had glass in them. I had learned how to cut glass at a picture framer. There was a bargain box in the front of the store where I worked full of used picture frames and little shadow box things that people put their tchotchkes in and so forth. They sold those things for a dollar, but I only had to pay fifty cents because I worked there. In my spare time I played around with enclosing these little wooden boxes that had a rabbet on one side that you could drop a piece of glass into. Then you’d either have to put some kind of glue or something to hold the glass in place or put another piece of wood on the front edge to hold it in. That created the form”.

Besides the publication of the catalogue for the ICA Miami exhibition, in other news the artist has seen the recent installation of a commission for MOCA in Los Angeles, “Bill and Coo”, consisting of two red cubes in laminated glass that gleam in the Californian sun on Grand Avenue. They’re reminiscent of his row of colourful glass cubes exhibited on the Whitney Museum’s terrace during the 2017 Biennial.

When asked what he would like to be remembered for, Larry Bell eventually responded: “that the work I have made is honest.” Larry Bell is a great man and, like all the greats, he’s modest.