For centuries, art was the result of an almost identical action: applying layers of paint with varying degrees of thickness to produce forms and create artworks. The American artist Mark Bradford has broken with tradition: he makes works without paint, using materials that clump together on the canvas before blasting off parts of the surface. 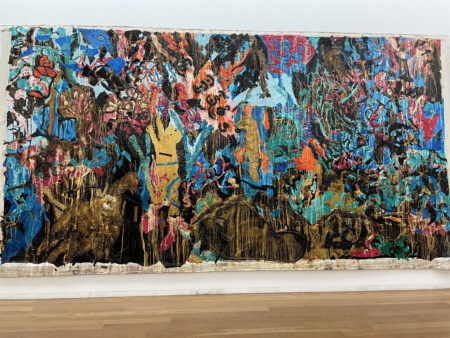 The result is astonishing. Firstly because it demonstrates his virtuosity in terms of colour, but also because his abstract compositions, which are often in XXL format, seem to be carrying the ghosts of forms. In this respect, the exhibition running until 19 June at the Serralves Museum in Porto is an eloquent example.

A star in USA 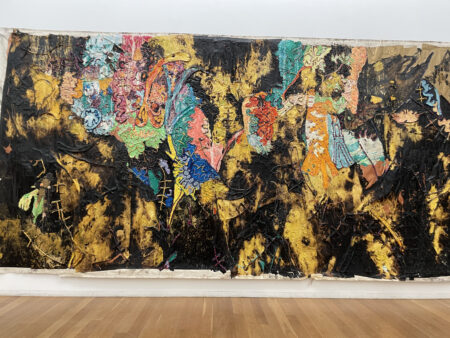 The visual impact is powerful. It is the artist’s first major European institutional show, if we exclude the American pavilion when he represented his country at the Venice Biennale in 2017 . I interviewed Mark Bradford in 2017 in Venice. He spoke about his whispered messages.

Mark Bradford is a star in the United States. American museums like Lacma in Los Angeles, his hometown, and the Hirshhorn in Washington possess some of his major monumental artworks.

His new obsessions are on show in Porto, featuring canvases that can measure up to 14 metres long. As the director of the Serralves Museum Philippe Vergne explains, Bradford tells stories through his paintings in a fragmented way: “they draw on the past and current violence in American society”. 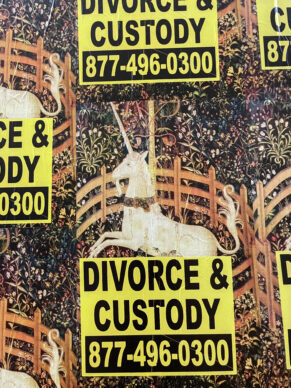 In this instance he has developed a passion for representations of a series of mythical tapestries from the 15th century which belong to the Metropolitan Museum in New York: the hunt of the unicorn. He’s used this iconography depicting the hunt of this dreamlike creature to construct his works. 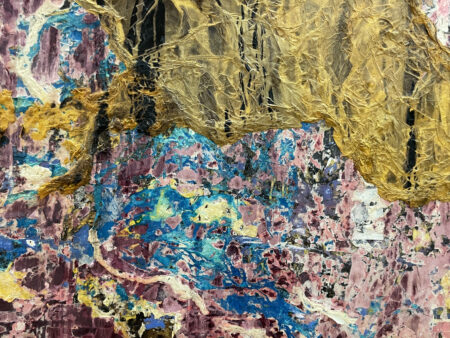 Like Courbet in the 19th century who painted hunting scenes in which the animal symbolized the artist, Bradford shows, in his own way, “the hunt of the other, the foreigner, the vulnerable”, all the contemporary George Floyds, in Philippe Vergne’s analysis. To do so he uses a reproduction of the unicorn which he covers in overlapping layers of coloured paper, magazine pages and comics, as well as leaflets, mixing them with liquid glue, and then attaching various materials, such as rope. 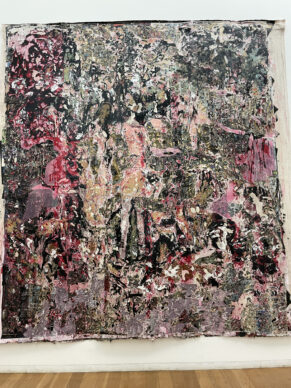 In a second phase he blasts away some of this material using a high pressure washer. It is this process of both modelling and corrosion that produces a unique result. Certain forms, of a hunter or a fountain, thus emerge from the midst of the mass of materials. In another room, to describe a city, he uses posters as a base, for example those of Los Angeles. 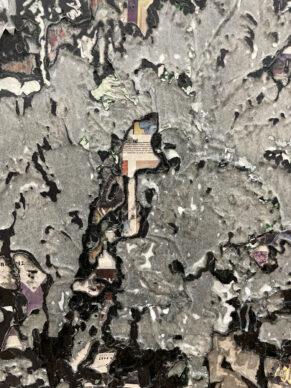 The result is unexpected: from afar the viewer thinks they can recognize a kind of post-impressionist painting with soft colours and a lyrical aspect. Up close, the mass of materials reveals the process.

Bradford’s art, which has been uniquely strengthened in recent years, is innovative because of its process of fabrication, its visual power, but also because it takes as its source, discreetly yet effectively, the fertile social ground of modern-day America. 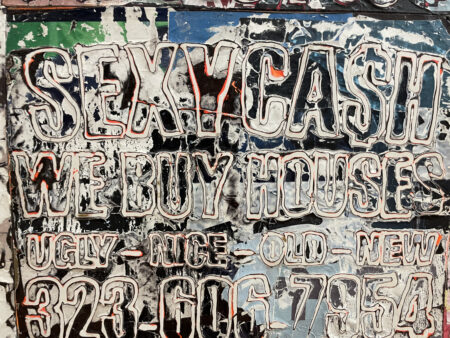 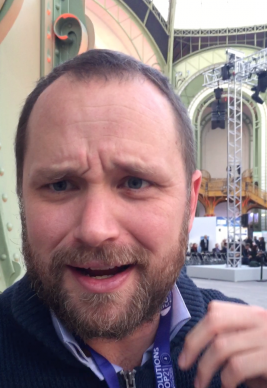 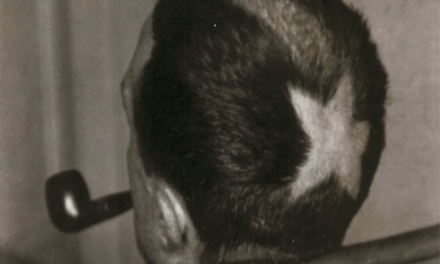