Art history shows us that, regardless of the era, sometimes artists can find one another through certain obsessions. This autumn the Louis Vuitton Foundation looks at a textbook case of how two extraordinary sensibilities can come together, several decades apart, through their shared feeling for nature, expressed in a frenetic style of painting in a small corner of the Vexin in north western France. 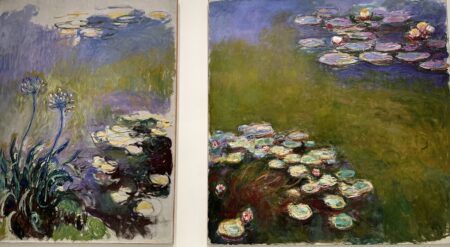 The institution is presenting a dialogue on show until 27 February between the canvases of the French painter Claude Monet (1840-1926) and those of the American artist Joan Mitchell (1925-1992). It is an epicurean immersion in these two artistic verves. Suzanne Pagé, artistic director of the museum, describes it as “echoing artworks” accompanied by an “invitation to really look, spending time there”. The resulting encounter is spectacular; the two artists playing on the visual caress through colour and the immersion of the viewer.

The majority of Monet’s paintings had been removed from their frames, which eliminates any temporal detail from the paintings and enhances the establishing of the dialogue. 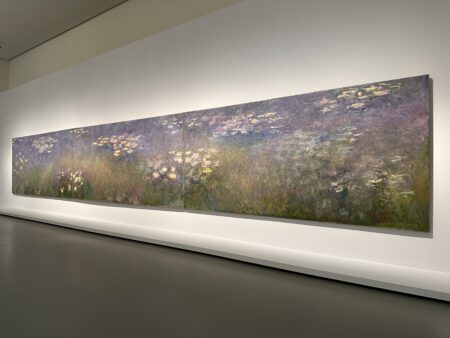 Let’s start with the eldest. Whereas Charles de Gaulle once said that “old age is a shipwreck”, with all the physical and intellectual afflictions it can bring, Claude Monet was one of the rare people for whom it represented a time of apotheosis. This is how one of the earliest impressionists entered old age: in his garden in Giverny where he had lived since 1886, applying himself to his heart’s content to bringing out the creamy hues in his aquatic landscapes. He freed himself from forms, which are literally diluted in his compositions. This is where his sense of polychromy, with the infinite shades of blue, green and yellow through to brown, assumes its full power.

Claude Monet is not an artist whose career can be reduced to a linear creative trajectory. From the 1910s a revolution took place within him. There are at least two Claude Monets: the so-called “classical” impressionist artist who has gone down in history with his beautiful floral gardens and women in long white dresses, and then another from post-1912, having entered old age, but still fresh and fundamentally free. The ultra-radical Monet of the later years wrote in 1912 to his friend the art critic Gustave Geffroy: “I only know that I do what I can to convey what I experience before nature and that most often, in order to succeed in conveying what I feel, I totally forget the most elementary rules of painting, if they exist that is. In short, I allow many mistakes to appear to fix my sensations.” This is the Monet on show at the Louis Vuitton Foundation in 34 paintings.

Facing him, in an obsessive kind of dialogue, there is Joan Mitchell, with her 24 works. In the Frank Gehry-designed building, on the ground floor, Sarah Roberts, Head of painting and sculpture at SF MOMA, has  co curated a retrospective of the painter featuring around fifty canvases. Joan and France have a unique history. After her experience when she was very young as part of the abstract expressionist group with her elders in New York, from 1955 in Paris she met the person who would become her companion and artistic partner until 1979, the Canadian painter Jean Paul Riopelle.

Refuge in the countryside 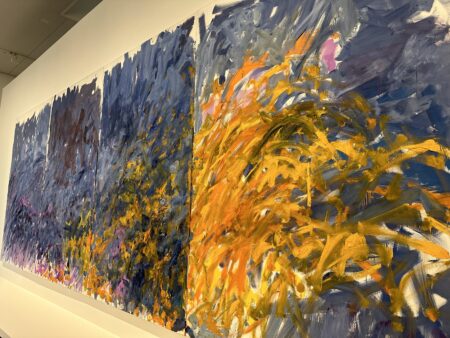 She then found a refuge in the countryside, where as soon as she had the funds in 1967 she bought a house. The residence is located in Vétheuil in the Vexin, the very place where, only a few metres away, the great Claude Monet had lived between 1878 and 1881. The little locality is also scarcely 18 kilometres from Monet’s “kingdom”, Giverny. 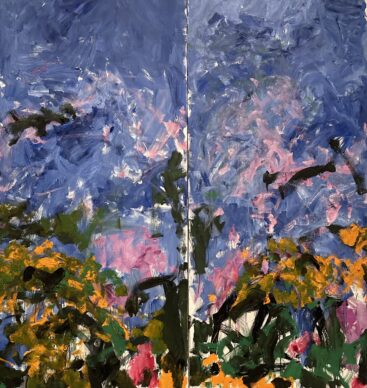 Contrary to what we might imagine, this move following precisely in Monet’s footsteps was coincidental. However Mitchell later denied this when she seemed literally caught up in the impressionist’s painterly expression. She said for example, on the colours which inspired her in Vétheuil: “The mornings, especially very early, are purple; Monet has already shown that. When I go out in the morning it is purple, I am not copying Monet.” No doubt she had also had the opportunity to admire the Water Lilies cycle offered in 1918 by the old master to the French State, and which can still be experienced at the Musée de l’Orangerie. The politician and friend of Claude Monet, Georges Clemenceau, was behind the installation of the  extraordinary series in the French museum.

The monumental beauty of nature 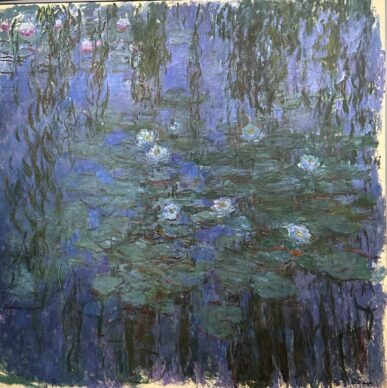 “Art reveals to us the joyful energy in an expanse of water, the vault of the sky, the clouds, the flowers, all with so much to say to us, yet powerless to do so without Monet.” Georges Clémenceau, wrote these words about the Water Lilies.

In Joan Mitchell, too, the flowers have something to tell us, and the vault of the sky is filled with joyful energy. They have both seen the monumental beauty of nature and made it dance. 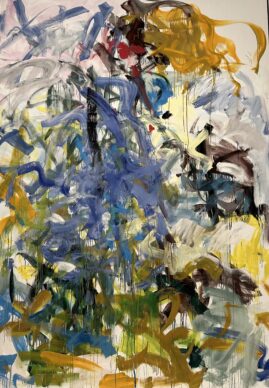 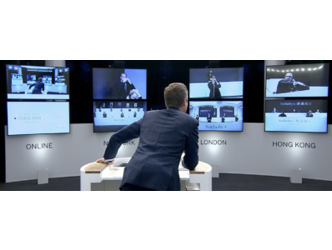 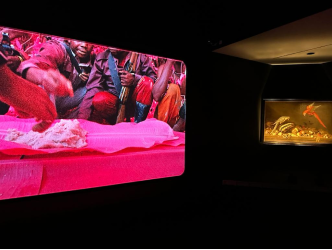 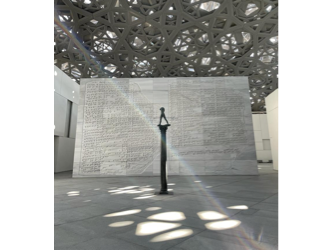