Frieze week: the London art scene is hyperactive despite the post-Brexit crisis 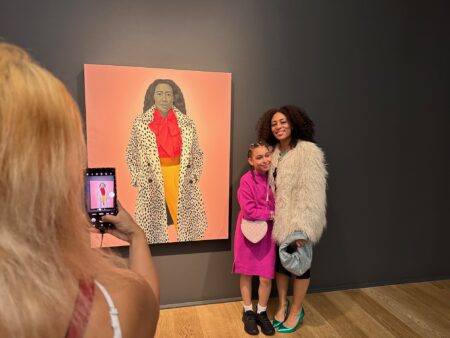 If Great Britain has been hit by a social and economic crisis, the largest art fair in the country seems to be faring well. On 12 October Frieze opened in Regent’s Park, with its two components, Frieze Masters (128 exhibitors) displaying works from antiquity up to the 20th century, and Frieze London (164 exhibitors) dedicated to contemporary art. The level of participation is roughly the same as last year. “London is resilient,” explains the director Eva Langret.

“We are going through a challenging time but London is still second in the world in the art market, with a growth of 14% last year. Everyone predicted the closure of galleries in London following the Covid crisis but we haven’t seen any of this. New spaces are even opening up again here.” This French national who has lived in London for a long time also has a response to the brand new offering on the international market: Paris+. It’s under this name that the organizers of the very prestigious Art Basel are inaugurating a contemporary art fair on 19 October in Paris, on the same site and instead of the Fiac. “Europe is a large continent with enough space for two major fairs.”

There’s even circumstantial optimism from the director of Frieze Masters, Nathan Clements- Gillespie: “We know there is a gap between the general economic situation and the art market. Incidentally many Americans have come to Frieze. They have an advantage with the exchange rate of the pound against the dollar.” 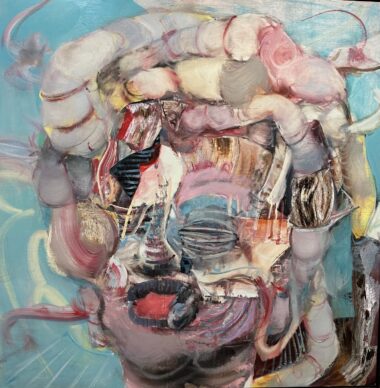 That said, in the field of contemporary art, to avoid any complications relating to exchange, the prices of artworks are generally listed in the currency of the artist’s place of residence.

The day before the fair many galleries opened exhibitions of highly anticipated and highly expensive artists. At Hauser & Wirth, two new large-scale works are on display by the painter Amy Sherald (born in 1973). She is known for her portraits documenting African American society but above all for making the official portrait of the former First Lady of the United States, Michelle Obama. In London we can see in varying formats her friend who is a farmer posing against his tractor, a small boy triumphant at the top of a slide, and a young man in an acrobatic position on his motorbike… Amy paints in a hyperrealist style that is detailed and masterful, which plays with the contrasts of colours. The smallest paintings are on sale for 800,000 dollars.

At Thaddaeus Ropac it is Adrian Ghenie (born in 1977), the Romanian who lives in Berlin and is a star of the art market, who is exhibiting figures painted of a nightmarish Marilyn Monroe with a face distorted by memory, age, or who knows what torments (on sale between 400,000 and 1.5 million euros). Last May one of his paintings sold at auction for 9.6 million euros. 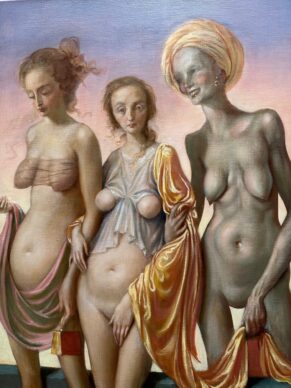 Sadie Coles, the influential London gallerist, is exhibiting three paintings by one of the geniuses of contemporary figuration, the American John Currin (born in 1962). His women who are painfully thin with sagging flesh could be seen as the embodiment of the dread of aging in contemporary society. Even though, in market terms, Currin hasn’t had the wind in his sales at auction since the late 2010s, one of his paintings was also sold at the opening for around 1.8 million dollars.

At the Frieze London fair, another of the pillars of contemporary British art, the Pilar Corrias gallery, traditionally dedicates its booth to a single artist. This year it is Hayv Kahraman, born in Baghdad in 1981 who then emigrated to Sweden before basing herself in Los Angeles (See here the reports about Art Dubai where Hayv Kahraman was shown). Her paintings are midway between folklore and Pop, featuring women merged with abstract forms, on sale for between 30,000 and 150,000 dollars. From the morning of the opening of the fair, 18 of the 20 works proposed at the booth found a buyer. “After the Covid and Brexit crises now the market is returning to normal,” observes Pilar Corrias.

Already sold before the fair 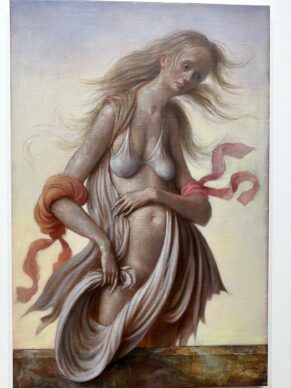 In the field of highly contemporary art, all the prominent artists are now subject to strong demand which is making them virtually inaccessible. In the aisles, an American collector based in London who has been working in finance and is dedicating up to 100,000 dollars per work rants: “one asks oneself why we still walk through the aisles of the fair. Everything’s already been sold via photo three weeks ago. The galleries adopted this habit during Covid and now it’s impossible to ask them to wait and see the work in person.”

It is perhaps to expand the vision of collectors that Frieze London is proposing “Indra’s Net” for the first time this year,  a selection of 18 artists from new horizons, selected by the art historian and future assistant curator at the Guggenheim Abu Dhabi, Sandhini Poddar. 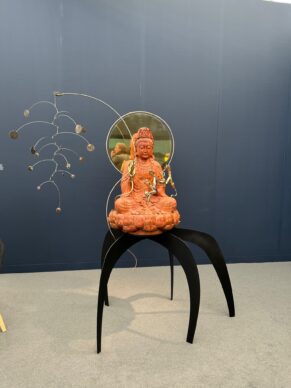 Among them is the Vietnamese Tuan Andrew Nguyen (born in 1976) is exhibited by the Quynh gallery from Ho Chi Minh City who are participating at Frieze for the first time. He has made a sculpture composed of a wooden Bodhisattva that has been damaged and repaired with the aid of recycled copper from the war (on sale for 85,000 dollars). However, here again the accessibility of the work is limited: the gallery requests that the buyer is a museum and not a private individual.

On the other side of Regent’s Park at Frieze Masters we find another kind of rare artwork. The French dealer Hervé Loevenbruck with his associate Stéphane Corréard is dedicating the booth of their gallery, Loeve&Co, to a French surrealist painter who people are talking about a lot right now but we don’t see many of her works: Leonor Fini(1908-1996). The curator of the Venice Biennale, Cecilia Alemani, is showcasing her at her exhibition which is running until 27 November (See the report about the Venice Biennale here). 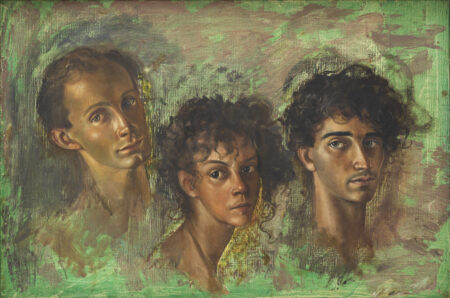 On wallpaper designed by Fini, which has been reissued by the gallery for the occasion, we discover around twenty drawings with a fantastical spirit (on sale from 12,000 euros) but also a self-portrait painted in the company of two young men, a souvenir of their lives together. Dating from 1955, the canvas is on sale for around 650,000 euros. Around a dozen drawings were already sold by the morning of the opening. “Frieze Masters is, in my opinion, the only place where the level of interest for forgotten artists is so high,” emphasises Hervé Loevenbruck.

Lastly, among the largest values of the fair, the booth of the famous old masters dealer, the British Johnny Van Haeften, is presenting a small painting on copper of infinite delicacy made in 1616 by Jan Brueghel the Elder (1568-1625). In an exceptional state of conservation, the work depicts villagers at a fair with, most likely, on the righthand side, the painter himself and his family. The owner of the painting is an American who acquired it in 2005 for 5 million pounds which at the time, taking into account the exchange rate and taxes, equated to 9.2 million dollars. He is now expecting 10 million dollars. “Brueghel is an artist who’s been in demand for 400 years. You can’t make a safer investment,” concludes the dealer. 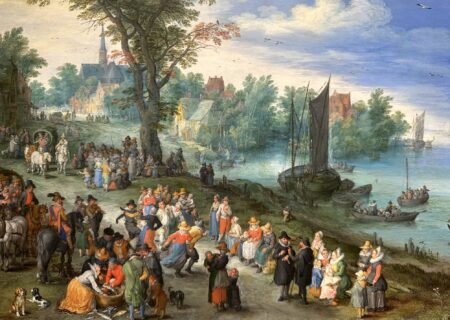 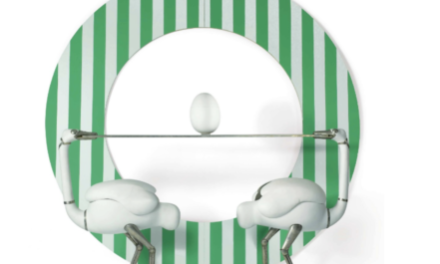 Lalanne madness: sheep, cabbages with legs and other ostriches sell for millions of euros once to Yves Saint Laurent and today to Roman Abramovich