“The Scream” by Edvard Munch (1863-1944) is a bit like the tree that conceals the forest. Or the story of how a painting conceived in four versions – which has become a cultural touchstone in global collective memory – has long overshadowed the rest of the output of this Norwegian artist, one of the geniuses of modern painting. The canvas that encapsulates the unbridled anguish of a century, depicting a simplified human figure caught in a whirlwind of colours, set an all-time record at auction in 2012: 120 million dollars. We now know that this version of the Scream was acquired by one of the biggest American collectors, the businessman who these days is subject to questions relating to his links with the late Jeffrey Epstein, Leon Black. (See here a report about Munch and Expressionism at Neue Galerie in New York with the famous Scream) 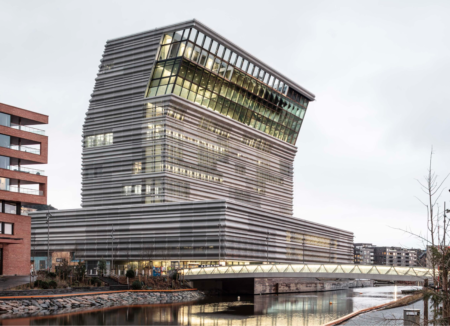 At the end of the summer of 2021 we will see the reopening of the museum that covers everything about the artist, the extraordinary Munch in Oslo, in a new 13-story building designed by the Spanish architect Juan Herreros. Its 11 galleries are certainly needed to display the vast collection containing no less than 28,000 artworks, including 1,100 paintings and 7,000 drawings.

While the painter, who spent a significant portion of his life in psychiatric hospitals, was very prolific – including knowingly repeating certain works for commercial purposes – he didn’t like to separate himself from his canvases. As the museum’s head curator Lars Toft Eriksen explains, Munch is the virtuosic craftsman of the myth of his own glory. (See here a report about a Mapplethorpe / Munch show at the Munch museum) 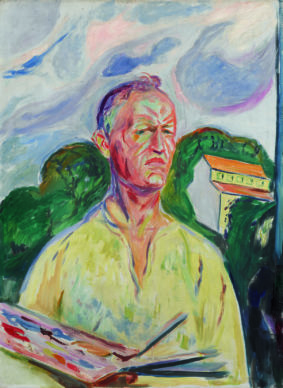 “He was very preoccupied by the idea of his legacy. He also produced a large number of self-portraits. Of course he had mental health issues, but he was not mad. He was an excellent manipulator who played on the idea of madness.” Lars Toft Eriksen refers to the inscription found at the base of one of the versions of The Scream which reads “can only have been painted by a madman” and was confirmed by the museum in February 2021 to have been written by the painter.

It was this same highly regarded “madman” who painted two pictures that are being sold at Sotheby’s in London on 25 March. This is quite an event if we consider that the works which resemble what we expect of the Norwegian artist are fairly rare on the market. 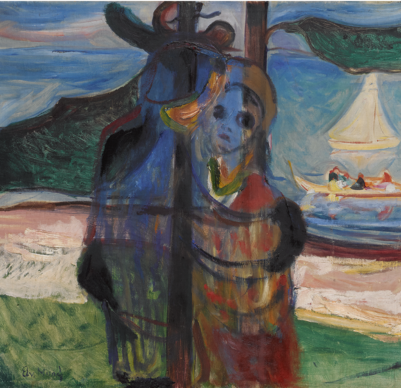 Where Munch was innovative and what is particularly sought-after is an extraordinary marriage of bright and contrasting colours which, up close, verge on abstraction; unusual perspectives; original viewpoints, all animated by ghostly figures who either look threatened or threatening.

Summer day of Embrace on the Beach 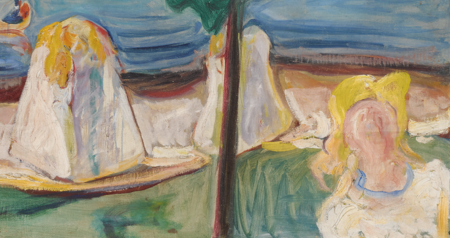 We find these aspects in “Summer Day or Embrace on the Beach” painted in 1904. The characteristics of Munch’s tortured psychology are here: frightening love, isolation, anxiety within in a beautiful natural setting. The work is part of a frieze of 7 paintings in total, and the other 6 can be found at the Munch museum. They were commissioned by his patron Max Linde, an ophthalmologist from Lübeck, to decorate the nursery in his home. When he received them, the commissioner didn’t consider them to be appropriate for an audience of little blond children.

This painting, which belongs to a large family of Norwegian collectors, the Olsens – who are planning to open an institution dedicated to Munch in due course – was acquired in 2006 for 9 million euros. It is estimated at 9 million pounds. Within a context of hyper valuation of the Norwegian artist, it’s clear that this relatively low estimate is designed to attract bidders. 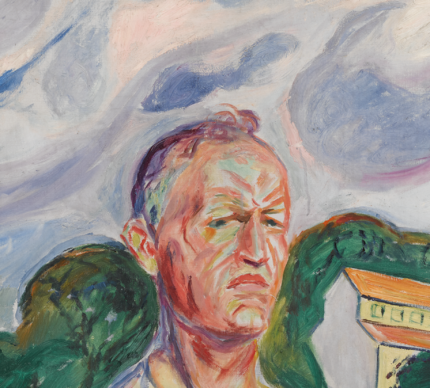 The other painting by Munch from the same provenance, presented by Sotheby’s on 25 March, is one of his numerous examples of self-celebration. “Self-Portrait with Palette” painted in 1926 depicts an artist who seems to be studying himself in a mirror, against a background of beautiful blue sky. It came late in his career when his creativity was no longer fresh. “During the 1920s he was above all concerned with organizing and promoting his exhibitions,” explains the head curator at the Munch museum . “The work is typical of this period in which he was trying to foreground his image as a famous painter.”

At Sotheby’s Simon Shaw prefers to highlight the fact that a Munch self-portrait hasn’t been seen on the market for a very long time. He adds: “We are living in times of great anxiety. Nobody describes difficult moments in life better than him. The current context is particularly favourable for him. Numerous Munch exhibitions have travelled the world in recent years.

There’s an exhibition taking place at the Royal Academy in London with Munch in dialogue with the British artist Tracey Emin, and the museum dedicated to him in Oslo will soon be reopening. 2021 is the year of Munch!” he concludes with enthusiasm.

According to the art market database Artprice, between 2000 and December 2020 Munch’s value increased by 86%. Regardless of the current conditions, his “summer embrace” looks set to sell for well above its estimate.