He’s one of the most natural heirs to Marcel Duchamp. Rirkrit Tiravanija (born in 1961) is an extraordinary free and playful artist.

In a world overwhelmed by commercial relationships he has made his mark, since the beginning of his career, through an extensive dematerialization of art.

I was introduced to his disconcerting creative power in 2005 when he was asked by Suzanne Pagé (now the director of the Fondation Vuitton) to organize an exhibition at the Couvent des Cordeliers in Paris featuring – nothing. It exhibited empty picture rails, labels from former exhibitions and guided visits for ghostly artworks with guest artists like Philippe Parreno. An exhibition which thus negated not only the classical art-show format but also the artist’s own signature.

Tiravanija, born in Argentina but of Thai origin – his father worked in diplomacy as he says in the interview – who lives between New York and Berlin, has also left a mark through the staging of his large banquets in places such as the forecourt at the Art Basel fair or at the Grand Palais in 2012.

Feeding and meeting people, creating interactions between them. Sharing and participating, as one wishes… The French art critic Nicolas Bourriaud sees him, in his time, as an archetype of his theory of the “relational aesthetic”.

The viewer and the artwork

Ultimately, Rirkrit is a cool artist who always manages to get others to act or work for him. As Duchamp used to say, “it’s the viewer who makes the artwork”: so let’s put the viewer to work!

Rirkrit has nonetheless received international recognition, having been awarded the Guggenheim’s Hugo Boss Prize in 2004 and been the subject of exhibitions at influential venues such as on two occasions at the Venice Biennale and on two further occasions at the Whitney Biennale in New York. 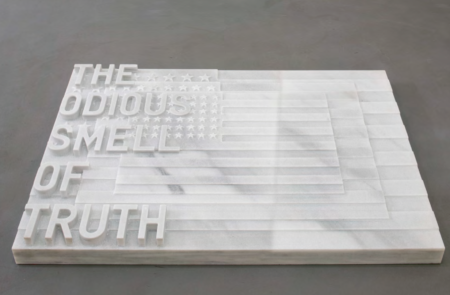 In recent years it is worth noting his slogans in particular, which resemble political marketing in the guise of groups of words on t-shirts, bags, newspapers and various other media. His goal is to gradually penetrate people’s consciousness.

In an interview with art historian Jörn Schafaff he explains: “I usually describe my text works as road signs. (…) When you drive up to Pai from Chiang Mai in Northern Thailand you drive through the forest and all of a sudden you find a little piece of wood nailed to a tree with a text written on it, usually in Thai.

Most of the time it’s a message from Christian missionaries. I always find it interesting how they suddenly show up in the middle of nowhere, totally out of context. You read it because it stands out, and it does have some effect, whether you agree with it or not. I’m interested in this floating attention – that and the phenomenon of so many people running around wearing t-shirts not realizing what it says on them, at least in Japan or in Thailand.”

In fact Rirkrit Tiravanija is cool and free like Marcel Duchamp, whom he references in the interview.

Because Duchamp was an advocate for “non-retinal” art, but up until his death he was also working secretly on the most retinal artwork there is: “Etant donnés”. At the Philadelphia Museum of Art you can look through a peep hole in a wooden door and see Duchamp’s three-dimensional scene of a nude woman with her legs spread holding a lamp. 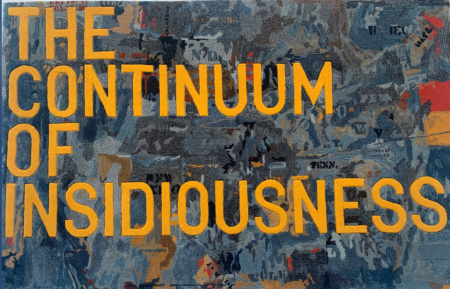 While Rirkrit is a follower of dematerialization, for his new exhibition at the Chantal Crousel gallery until 10 October 2020 he has chosen to do the opposite: using heavy materials and traditional techniques. No dogmatism.

He has made engravings on large marble plaques which could be seen to resemble tombstones, giving the show a sombre aspect.

They are marked with American flags, a reference to the flags of Jasper Johns. He explains the reference: “Johns was doing a Duchampian readymade. This is what I think is interesting about it, using the flag as a readymade. He chose motives such as the flag for its iconic status – for being something “the mind already knows’.” 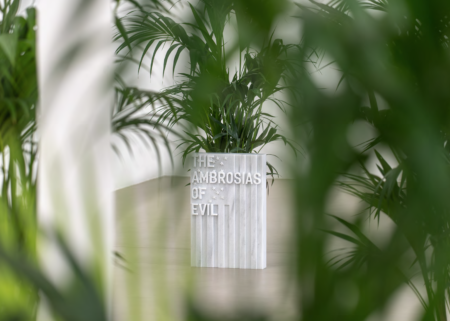 He has also reproduced Johns’ maps of America on rugs, accompanied by, among other things, the slogans: “SHADOWS IN PROGRESS” and “IM MORAL COMPASS”. He learned the Aubusson weaving technique thanks to his study of local craft for a project commissioned by Maja Hoffmann for the Luma Foundation in Arles. These new works function through the association of ideas. Rirkrit talks about an America that is falling apart against the backdrop of an election.

The odious smell of truth

During this period of an America that is falling apart against the backdrop of an election, written in wool or in marble, the words “THE ODIOUS SMELL OF TRUTH”  sound very strongly like a call for reflection that is at once soft and powerful.

Rirkrit Tiravanija continues, like Marcel Duchamp, to recycle his artworks or those of other artists while renewing their impact. He concludes by saying that “political art is never poetic enough”.

He has succeeded in this quest. 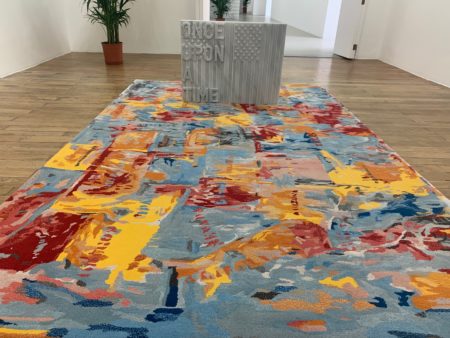 Untitled 2020 (once upon a time) (after jasper johns). Until 10 October. Galerie Chantal Crousel. https://www.crousel.com.