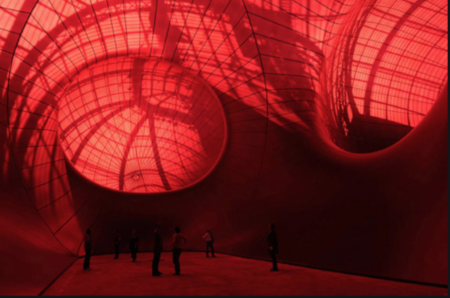 It was announced in 2011 but it was very difficult to grasp its importance at the time. When the Grand Palais in Paris staged an extraordinary show entitled Monumenta, following the participation of Richard Serra and Anselm Kiefer, the guest that year was British artist Anish Kapoor (born in 1954) who installed a giant dark red membrane throughout the interior of the nave. 37 metres tall. 72,000m3. The Grand Palais had been impregnated and visitors, dwarfed by the structure, could enter this original womb that the artist named Leviathan.

Inside, amid the deep red, one had the sensation of touching the infinite, because Kapoor is a master illusionist. He blurs human perception and thus puts us in contact with a mystical aspect that induces an agreeable state of unease. He makes our heads spin. In this instance the artist was talking about womankind and its overwhelming importance within society, woman as the great origin of the world. He put her at the centre of everything, thereby highlighting the fact that her representation has been erased from the imaginary iconography of power. Ahead of his time, he was evoking the surge in the movement calling for greater rights for women, demanding respect and equality on a global scale. 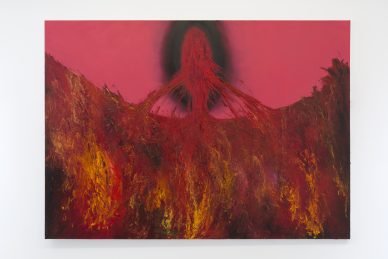 Right now, the artist who declined to be filmed this time (see his video interview on the occasion of his exhibition at the Kamel Mennour gallery) but whom I was able to interview via the traditional medium of telephone, is based in the Oxfordshire countryside. However he did send me, at my request, a selfie taken in his studio. 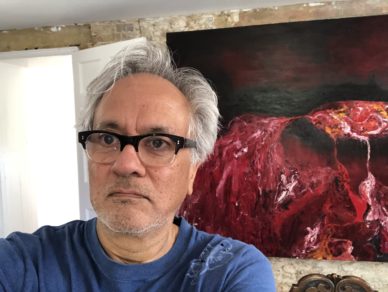 “I am trying to find quietness in this horrid situation. I am working in my small studio here in the countryside. I have been making paintings for 30 years now. They are full of ritualistic blood. Blood is at the center of the wonder of being alive. The red of blood is violent but also the matter of life. Red is earth, it flows horizontally. Red is female. It is the colour of the beginning. The first gods were red, later when men overtook ritual or religious practice from women the gods were turned blue.

The gods came to reside in the sky. Horizontality became verticality, the vaginal became phallic. The red gods of the feminine were turned into the blue gods of the sky and did not bleed or die. How tedious.
-Blood is dirty. It is solid and liquid. It is good and bad, evil and life giving. I don’t know where I’m going with these bloody paintings. We artists must trust what we feel“. 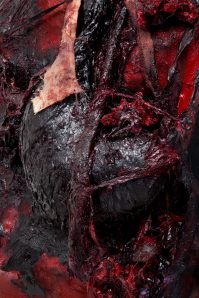 “What is happening now with this virus etc is a pure capitalist pathology. It is the fruit of capitalism’s lack of respect … and our insane rush to profit at any human or environmental cost.

We are led by a group, excuse me for speaking so crudely, of male assholes, who are utterly cynical. There are no exceptions regardless of country, apart from perhaps two women, the leaders of Finland and New Zealand.
For as long as we continue with a system that banks everything on profits, nothing will change. It’s clear that all governments have this agenda. The interests of human beings are not taken into account. We must send our children to school to learn, not to be slaves to an economic system that ties them to the slavery of employment in a corrupt market that does not see them as inheritors of the human gifts of compassion, poetry, love etc. All state and other systems of schooling at the moment see our children as fodder for the employment market and forget their humanity. How are we going to take hold of our own destiny?

We must, each one of us, reform ourselves.
As an artist, I have to de-school myself. It is not what I know but what I do not know that I am most interested in. Who cares what I know? But it may be from that which I do not know something new can emerge.

When I was 15 years old, there were 2 billion people on earth. Today 50 years later there are 7 billion of us. The systems that govern us are still those that were in place 50 years ago. Essentially our numbers have increased manyfold but we are backward in our ability to manage equality, law, economics, the natural world, etc.

Artists don’t have the answers to these questions. But they do have the possibility to observe their inner lives”. 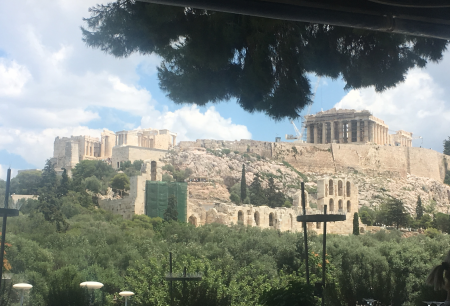 Athens, epicentre of contemporary art: from Twombly to Villar Rojas and also Documenta