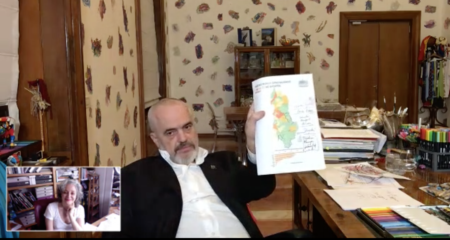 His first great exploit dates from the 2000s. Edi Rama (born in 1964) was the newly elected mayor of Tirana, the capital of Albania (a country with 2.8 million inhabitants), when he decided to have a number of the building facades in his poor, gloomy city repainted in bright colours. It’s hard to imagine a greater painterly gesture from a politician. Afterwards his friend Anri Sala, probably the most famous Albanian artist today, dedicated a beautiful film to him in 2003: Dammi i Colori.

Pioneer in the fight for democracy

Before that, Edi Rama had been culture minister, leader of the socialist party, pioneer in the fight for democracy in his country, and he has now been prime minister of Albania since 2013. 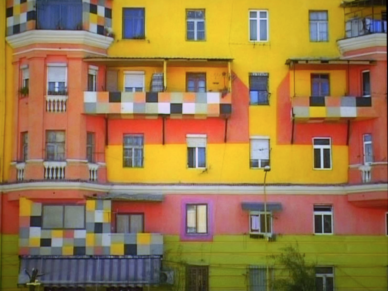 It should be said that the artistic gesture of repainting the building facades can quite simply be put down to the fact that he is an artist. Jessica Morgan, head of the Dia Foundation, says that there are artist-artists but that he is a rare case of an artist-politician. He studied at the Beaux-Arts de Paris and his father was a sculptor. 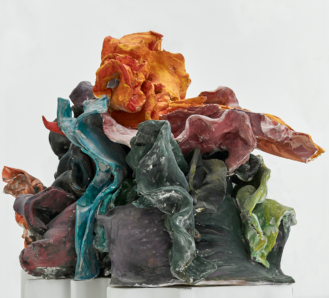 This multifaceted man is also huge, seeming to stand over two metres tall – he played basketball as well – and keeps up his artistic practice in spite of his prime-ministerial schedule and heavy responsibilities. Incredible though it may seem, he even has exhibitions of his work, like in February 2020 at the Alfonso Artiaco gallery in Naples. He also frequently exhibits with Carlier-Gebauer from Berlin. 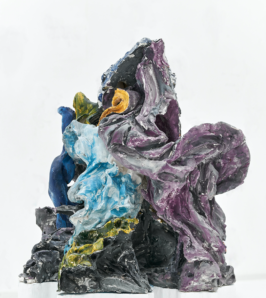 On the day of the interview Edi Rama was visibly tired. On the lapel of his jacket we noted the presence of a pin in the form of a monogram in the style of Dürer, only even more romantic. He explains that the letters R and E for Edi Rama are intertwined with an L for Linda, the name of his wife.

His artistic practice consists of making abstract sculptures in terracotta using multiple layers, which play with material and colour. But right now his studio is closed due to the coronavirus epidemic. Those who take an interest in his work know that he is a prolific producer of doodles, which he sketches during his meetings and discussions. During the interview we see a large box of coloured pencils lying open on the prime minister’s desk. This helps Rama to contain his anxiety and nerves. He doodles on official papers every day. 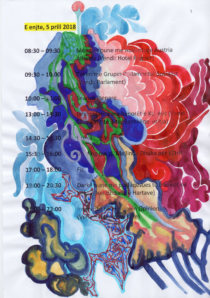 He shows me a coronavirus document soon to be covered in a colourful interlaced pattern. He doesn’t want to comment on the artistic interest of the exercise, but he refers to an MIT report that claims people who doodle have a greater capacity for concentration. Nor does he want to address the question of the meaning or the artistic interest of his polychrome sinuous shapes. He prefers to leave this to other people. A compilation of his doodles has been made into a wallpaper design that decorates the prime minister’s office.

Watch the video, where he richly describes his take on the world afterwards. It includes analysis of the behaviour of politicians on a global scale. He reproaches politicians for disregarding all long-term vision for the profit of purely electoral ambitions. In his view, only the Chinese have a free hand to make calculations in the long run. “In Albania there have been 27 victims of the coronavirus. We thought we were less prepared than others and we put lockdown measures in place very early on.” More broadly, his vision of the world that is fairly pessimistic when I ask him if he still has dreams. “Of course I still dream, but I also know the world of politics…” 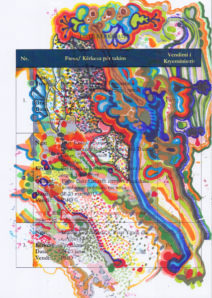