It’s all a question of language. In English people employ the same verb to mean “taking a photo” and “firing a gun”: to shoot. The scene took place in the autumn of 1964 in New York inside Andy Warhol’s mythical Factory. The artist, at the height of his artistic powers, had just finished making five portraits of Marilyn measuring 101×101 cm, inspired by a snapshot of her taken in 1954, which couldn’t be more glamorous. 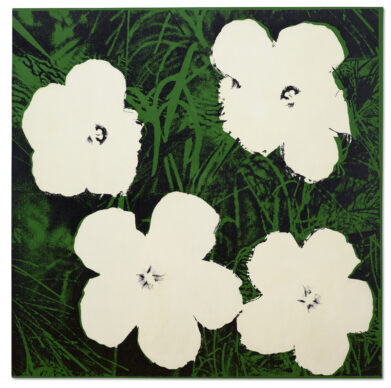 She had died two years earlier in dramatic circumstances. He’d had the idea to finish these paintings using a different coloured background for each: blue, orange, red and green. As usual for the time, he would often receive visits from eccentric figures and screwball types. That day Dorothy Podber, known in the little New York circle for her performances and photographs, stopped by at the Factory on 47th street. 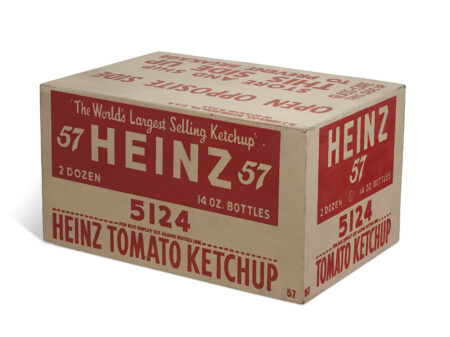 When she asked if she could “shoot” the paintings, Warhol agreed. Legend has it that she took a revolver out of her bag, took aim, and shot at the canvases, then returned the weapon and left. Warhol clearly hadn’t imagined her capable of such a “shooting”. Then the paintings were restored, perhaps by the artist himself. 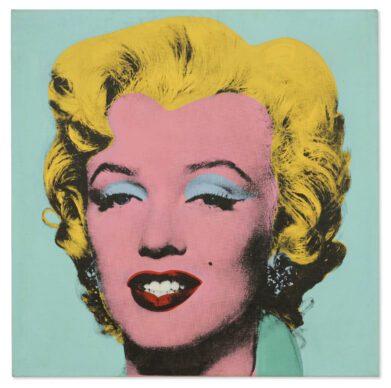 In 1968 Warhol was the victim of shots fired from a revolver by a feminist activist, which left him with a huge fear of death and a large scar on his stomach. As for the five paintings, they would become, through their visual power but also the subject they depicted (a sex symbol sacrificed on the altar of success), plus the invisible stigmata of the violence done to the paintings, among some of the artist’s most sought-after works.

Today we know that the collector Peter Brant possesses the version of the Shot Marilyn on a blue background, acquired in 1967 for 5000 dollars. The Greek billionaire Philip Niarchos is the lucky owner of the version with the red background. He bought it at the height of the art market crisis in 1994 for 3.6 million dollars. Steve Cohen, the New York hedge-fund manager, made the acquisition of the one on a turquoise background in 2007. They say it was an investment to the tune of 80 million dollars. Finally, in 2018 or 2019 Kenneth Griffin, his rival in Chicago, apparently offered 200 million dollars to obtain the version on the orange background. This shows how the “Shot Marilyns” from 1964 represent a trophy for the biggest art collectors in the world. 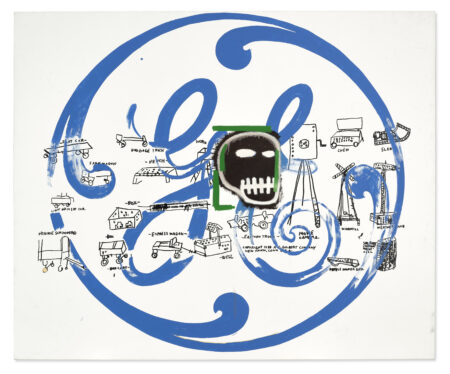 At auction, Warhol’s fees are much more “reasonable” since the record price, 105 million dollars, was obtained in 2013 for the depiction of a car accident scene, made in 1963, a “Silver Car Crash”.

On Monday 9 May Christie’s is presenting in New York  the “Shot Sage Blue Marilyn”. The estimate of 200 million dollars  is based on this latest colossal private sale to date. 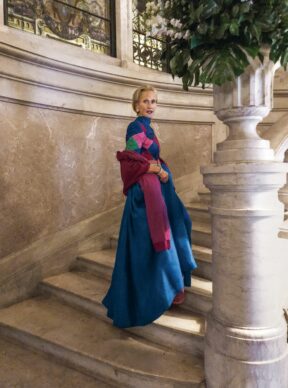 It was acquired by a legendary Swiss dealer, Thomas Ammann (1950-1993), between 1982 and 1983. He died prematurely of AIDS. His sister, Doris, who was incidentally his business partner who oversaw the administration of the gallery, took up the torch in Zurich. She died in 2021 and the auction house owned by François Pinault is dispersing what we imagine to be a part of the collection for a total across two sales, on 9 and 13 May 2022, estimated at 350 million dollars. The fruit of these sales is due to go towards charitable acts in the service of disadvantaged children. 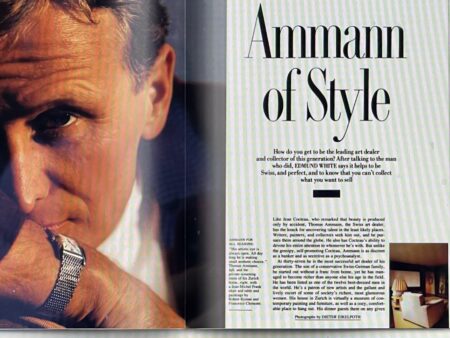 It is most likely Thomas Ammann who put together the most substantial part of the collection. It was also his initiative to undertake the writing of Andy Warhol’s catalogue raisonné in 1977 with the artist’s consent.

“The publication of the first volume of the work caused an upheaval in the Warhol market,” recalls the famous Swiss auctioneer Simon de Pury. “People had valued poorly the work of the artist who was up until then considered to be very commercial”. It’s striking to note to what extent Thomas Ammann has left, 30 years later, the memory of a figure with immense charisma. Simon de Pury, who was at the time curator of the legendary Thyssen-Bornemisza collection which today is exhibited at the eponymous museum in Madrid, states: “He sold us a Roy Lichtenstein ‘Woman in bath’ and a Balthus, ‘The Card Game’.

Things happened very fluidly. Thomas had an exceptional talent for seduction. I also remember his funeral at the cathedral in Zurich where the great dealer Ernst Beyeler gave a speech. Everyone was in a state of shock. In a certain sense, Thomas Ammann was the spiritual heir to Beyeler, and that day it was his elder who paid tribute to him.”

The French dealer based in Geneva, Marc Blondeau, describes him as a “Dorian Gray of the art market”. “I met him in the 1970s. Extremely elegant, he was a gentleman art dealer who was capable of taking a cross-disciplinary view of artistic creation, from 19th century art to the contemporary output. He had bonds of friendship with the artists from his era, rather than business.”

In Andy Warhol’s diary, published in 1989, which is incidentally currently the subject of a remarkable documentary series on Netflix(See here the report about the documentary), the high priest of Pop Art cites his Zurich friend eleven times, such as in 1978 when he amused himself with the fact of being invited by him to an expensive restaurant in the company of the painter Cy Twombly.

In an article published in 1988 in Vanity Fair, the famous writer Edmund White painted a fascinating portrait of one of the most elegant men of his time, who he described as “discreet as a banker and also as secretive as a psychoanalyst”.

Bice Curiger, director of the Van Gogh Foundation in Arles, who was behind the mythical Parkett art publication in Zurich (1) attended his memorable dinners. She remembers the Marilyn hanging in the living room and the “electric social life which meant that with him you could meet the filmmaker Fassbinder and his friends, Andy Warhol, the director Douglas Sirk and painters from the movement of the Italian trans-avant-garde.” 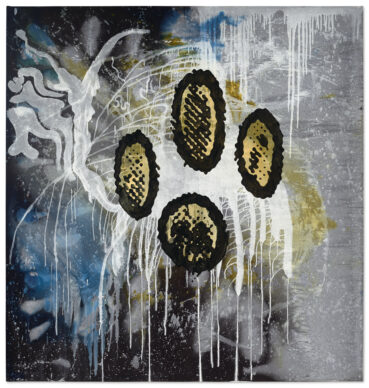 The sale on 9 May is an original combination of star lots and more modest works. It thus contains four works by Warhol in a context that is favourable to the artist, from his large-scale retrospective launched at the Whitney Museum in 2018 (before the market had shown a certain lull) (See here the report about the show at the Whitney).

A tomb by Twombly 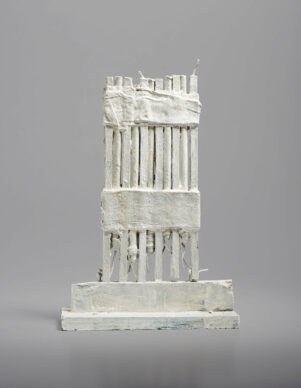 It was the American artist Cy Twombly who designed the tomb of Thomas Ammann in Zurich. The catalogue presents three rare artworks by the artist, including a painting made up of deliberate scribbles in pencil from 1955 (estimate: 10 million dollars) (See here the report about scribbling in art) and a sculpture in bronze painted white (estimate: 2 million dollars) which went on to be adapted in a concrete version for the dealer’s grave. 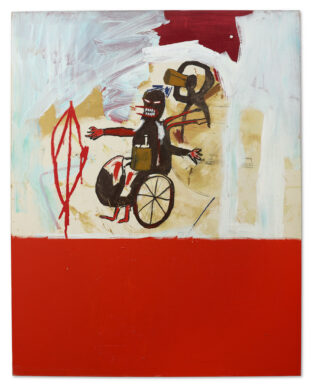 It also contains a stunning painting by Jean-Michel Basquiat from 1984 featuring a man in a wheelchair while half the canvas is occupied by a red stripe (estimate: 6 million euros) (See here the report about the Basquiat retrospective at the Fondation Louis Vuitton). 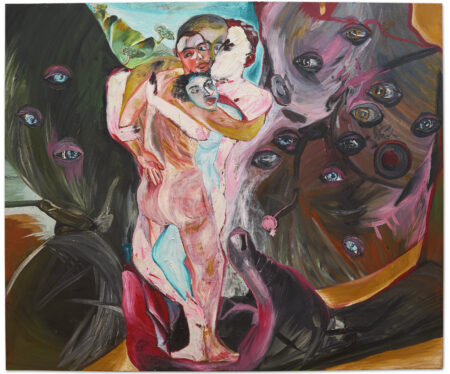 Edmund White evoked in his article Ammann’s taste for the production of the Italian artist who lives in New York, Francesco Clemente (born in 1952). Today he enjoys a certain renewal of interest among other things since he has been represented by the American gallery LGDR, who recently staged an exhibition on him in Paris. One of his large paintings from 1981-1982, mystically inspired, “The fourteen stations, N XI” has an estimate of 80,000 dollars (See here an interview of Francesco Clemente at LGDR).

The desire to buy

We know how sensitive the market is to the legends of art. The Ammann sale looks set to be no exception. It takes place within a context that is favourable in light of recent results.It remains to be seen whether the Chinese lockdown, the war in Ukraine and the sanctions on Russian goods will curb the desire to buy. 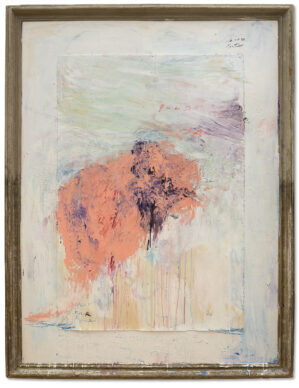 (1) A biography of Bice Curiger has just been published which describes the wild Zurich years. C is for Curator. Bice Curiger – A Life in Art. Dora Imhof. Walther und Franz Koenig