Bourse de Commerce, Paris. Philippe Parreno has created a masterpiece: the artwork for the ultra-present

In Paris, the spectacular rotunda of the Bourse de Commerce is currently turning into one of the major platforms for experimentation in contemporary art. Following on from the giant wax candles in the shape of figures, exact yet consumable replicas of the Rape of the Sabine Women by Giambologna, which may be seen as vanitases – vanity all is vanity…- which emerged from the imagination of Swiss artist Urs Fischer (See here an interview of Urs Fischer and here the report about the first show at Bourse de Commerce), the François Pinault collection is hosting an installation by French artist Philippe Parreno (born in 1964). 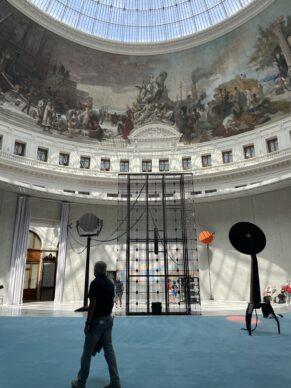 The proposition is simultaneously impressive and complex. You can go into it understanding nothing and still leave feeling dumbfounded, hypnotized even, by the enigmatic atmosphere emitted by this total work of art.

In love with Narcissus

“Echo 2”, which is its title, is a reference to the nymph who fell in love with Narcissus. It follows “Echo 1”, an installation by Parreno orchestrated at Moma in 2019 on the occasion of the reopening of the New York mega museum, in the entrance hall. But in Paris the proposition is masterful and less fleeting than the first American episode (See here the report of the reopening of  Moma).

It is composed of an ensemble of disparate elements, an ultra-contemporary visual spectacle. Philippe Parreno, an art history lover, compares it in a futuristic version to the Circus, the little theatre that Calder conceived and filmed using figures made out of wire. 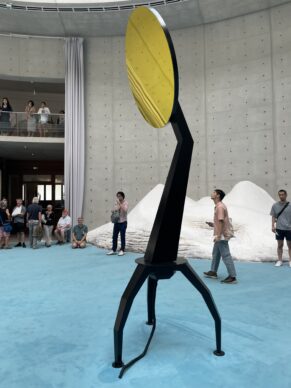 Among the main players occupying the nave are three heliostats, systems of intelligent mirrors which reflect the sun while following its trajectory. They address firstly the omnipresence of this star in human minds during this period of global heatwave. We might liken of of them to giraffes made out of black metal, whose heads are flat and reflective, which fittingly resemble Calder’s Stabiles. 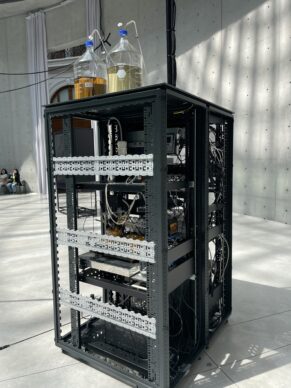 At the end of the room, on shelves, there is a bio-reactor, a device in which sentient micro-organisms develop within the context that influences the general programming of this “Cirque de Parreno”. It is programmed by scientists who create evolutions of yeast cultures and have been working with him since Parreno’s exhibition at the Tate’s Turbine Hall in London in 2016.(See here the report about the show at Tate and here his interview during the opening of Luma in Arles in 2021). 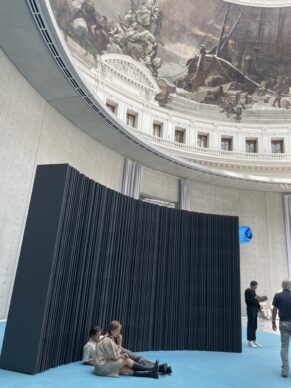 We also note the presence of a sound wall which is mobile (the artist is always trying to capture the viewer’s attention) and a gigantic transparent screen(reference tu Marcel Duchamp’s The Large Glass) which is therefore designed to show images but also allows for the possibility of seeing what is going on behind it . This creates a sense of disturbance in the viewer. And on one side artificial snow, chosen for its acoustic qualities.

Lastly, real-life children or young women, at timed intervals, take over the space to dance, sing or recite texts conceived by another artist, invited by Parreno: Tino Sehgal (born in 1976). Seghal, a pure conceptual artist, gathers participants to play out his scripts. He aims for a total dematerialization of his oeuvre. He had already granted me two interviews (See here and here).

Parreno believes in dialogues with his colleagues/friends. So in 2005 he created a portrait of the footballer Zidane in collaboration with Douglas Gordon (See a recent interview of Douglas Gordon here), a filmic masterpiece which we can see as a sort of Greek sculpture of the 21st century, an ode to a truly great athlete. 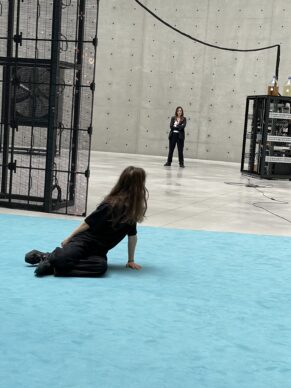 Returning to his collaboration with Sehgal, within the hyper-technological context of the work in the nave of the Bourse de Commerce the intrusion of strange figures in flesh and bone who recite their texts, break into song, or dance like robots, gives it a human dimension.

In his Parisian studio 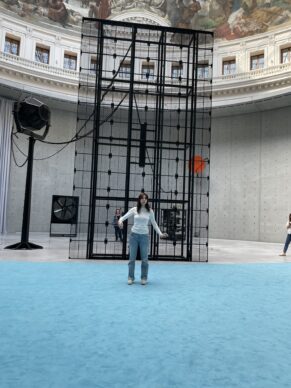 Philippe Parreno recounts in this video interview filmed in his Parisian studio things that are very important about his way of conceiving art.

In the nave it is like a play without beginning or end, with successive interventions that are all coordinated. The sun cycles, like the evolution of the micro-organisms, influence what we hear, feel, and see, in particular on the screens.

Here we recognize, among other things, an animated face projected on a huge scale: this is Ann Lee, bought in 1999 by Philippe Parreno and Pierre Huyghe in the catalogue of a Japanese cartoon company. The two of them then suggested to 16 other artists to create a work each based around the graceful cartoon figure. Here, the projected version of Ann Lee tells its own story. “My name in Ann Lee. You can spell it however you want. It doesn’t matter. No it does not. I was bought for 46,000 yen. 400 dollars…”.

Echo 2 also therefore has a slightly retrospective character.As for his next phase, Parreno reveals that he has been interested for a long time now in the phenomenon of the voice. He is even more obsessed with the issue since right now he is working on the creation of an opera for the Hamburg Philharmonic in which “figures would make the acquisition of voices”.

The artist is fascinated by Mary Shelley’s book, Frankenstein. For a long time he has been interested in the idea of a monster created from scratch which can then bear witness. He sums it up in this way: “It’s the idea of an object that wants to become a subject.” We understand that he himself has created many monsters, these machines who master themselves which run his exhibitions, beyond the will of the artist. 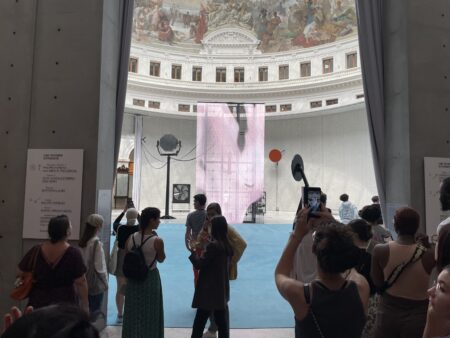 Echo 2 is a new multi-layered and multidirectional art form which is simultaneously sentient, hyper-technological, poetic, made up of subtleties but also in relationship with the elements and data. “A new form?” repeats the artist. “That’s what art is all about.” 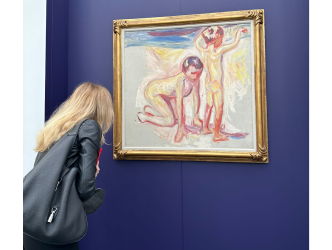