What more is there to aspire to when you’re an 84-year-old billionaire who was born into a poor rural family in a Breton village? The answer lies in the district of Les Halles in Paris inside a circular 18th-century building that has undergone a meticulous restoration: the Bourse de Commerce. 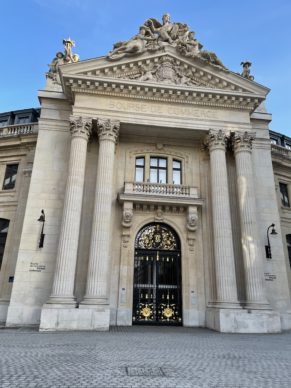 This space is the new home of the foundation belonging to businessman François Pinault, which will be officially opening its doors to the public on 22 May 2021. The last time I interviewed him – he declined my invitation this time – he told me that when he used to go back to his village, Les Champs-Géraux (which today has a population of 1,070), he always used to take a detour to avoid passing the school he’d attended growing up; a source of great trauma for him. Even with the passage of time, the child inside will always remain. 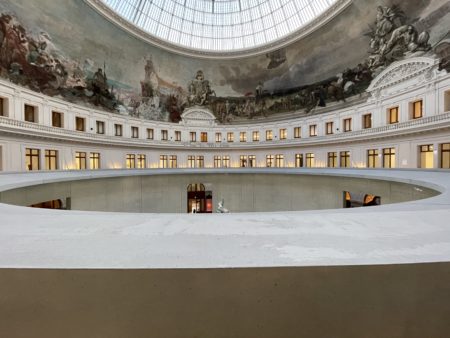 But François Pinault has had the last laugh on a colossal scale by proceeding to carry out an entire cultural conquest, going on to even become one of the masters of the field. Not only is he a renowned collector on a global scale (we recall that he first started out buying painters from the Pont-Aven School), but he also owns one of the art world’s major sources of supply, Christie’s, one of the two most important auction houses on the planet. 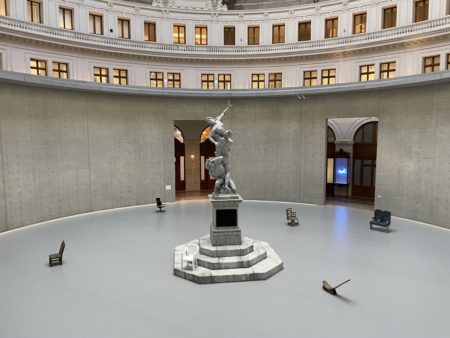 In the capital of his country

In 2005, unable to display his collections on the Ile Seguin on the outskirts of Paris after a series of administrative setbacks, he decided to open one site followed by another in Venice, the Palazzo Grassi and the Punta della Dogana, which feature his favourite subjects in the field of contemporary art. But what is happening now, it seems, is even more important to him. This is taking place in the capital of his own country, following an agreement with the city of Paris which has leased him the site for 50 years, where he can display his collection of contemporary art in situ. 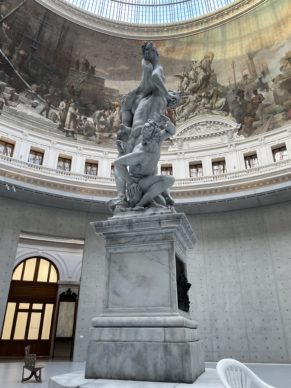 He is the true curator

That’s why François Pinault in person is the true curator of this inaugural exhibition at the Bourse de Commerce. And the result doesn’t disappoint. Firstly because – for those who are already very familiar with his previous tastes – you’re not going to see works by Koons and Damien Hirst.

Incidentally, the Mucem in Marseille is concurrently displaying a remarkable dialogue between Pinault’s Koons works and the institution’s vast collections of popular art, which we will explore in another report. Instead, as his long-term advisor Jean-Jacques Aillagon explains, he has decided to showcase artists who are rarely seen in Europe, or at least in France, who are making art about major issues that capture the current zeitgeist.

But let’s start with the architecture. Parisians will remember the building, long overlooked, as a rather grubby edifice topped with a dome. It has now regained its majestic 18th-century character from when it was first built as a grain exchange in the city centre. From the late 19th century, when it was transformed into a stock exchange, the interior retains a spectacular fresco depicting trade in the five parts of the world. 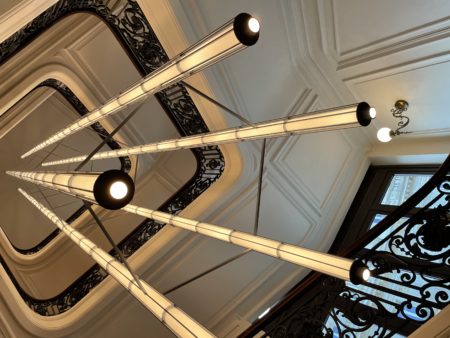 This adorns the entire upper section of the dome. In its contemporary incarnation, it has been the subject of an intervention by the architect Tadao Ando, who – in a masterstroke – has decorated the heart of the building with the insertion of a concrete cylinder measuring 29 metres in diameter. (See here the interview of Tadao Ando) 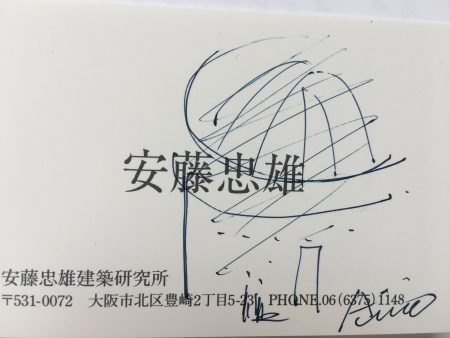 Space is a luxury

Here and there we see lights or furnishings by the Bouroullec brothers. The Bourse de Commerce is composed of 6800m2 dedicated to exhibitions and a cultural programme. But early on in our visit we are first struck by the empty space inside this central cylinder. “Space is a luxury,” as the latest laureates of the Pritzker Prize said this year, the French architects Lacaton and Vassal (who I will soon be reporting on).The empty space inside the Bourse de Commerce is nothing less than an elegant way of paying tribute to the work of Tadao Ando. 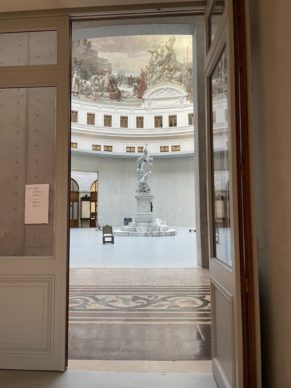 Close to this monumental central space encased in a perforated concrete curve, there is an installation by the Swiss artist who lives in the United States, Urs Fischer (See here and here an interview of Urs Fischer). The main principle of the work is that it is a candle. Yes, but this is a giant candle that is a faithful copy of one of the most famous sculptures in the world. It is an identical wax version of “The Rape of the Sabine Women” by Giambologna, whose original sculpture was carved from a single block of marble and is currently in the Piazza della Signora in Florence.

Between the bakery and the Louvre

In Fischer’s rendition, the work is intended to melt down before being replaced by another brand new and complete wax version. The artist jokingly likens it to a shop “full of delicious things that are always fresh. This artwork is halfway between the bakery and the Louvre.” And because of Fischer’s irreverent nature, he has positioned another statue-portrait near to this “monument” that is also in the form of a candle, of one of his painter friends, Rudolph Stingel, along with various kinds of chairs, from African seats to office chairs, to temper the grandiosity of the context. The two central pieces were also featured as part of his installation at the Venice Biennale in 2011.

French artists are present on the ground floor, with a hypnotic 12-metre-long painting by Martial Raysse dating from 2012, mixing a Pop style with an overpopulated village fresco in the manner of Bruegel (displayed at his retrospective at the Centre Pompidou in 2014), not far from a major series of works placed on old glass vitrines by Bertrand Lavier, which, as usual, play on words and the notion of the readymade. 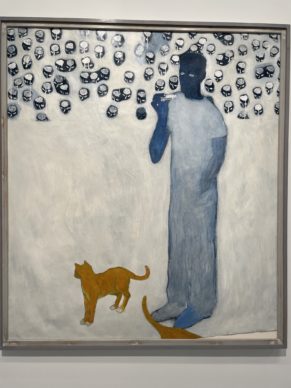 But the big surprise is the space, upstairs, reserved for contemporary figurative painting. “For the opening exhibition, François Pinault wanted to highlight the serious nature of many of the artworks from the collection and their focus on the major issues of today, such as race or gender,” explains his advisor Jean-Jacques Aillagon. 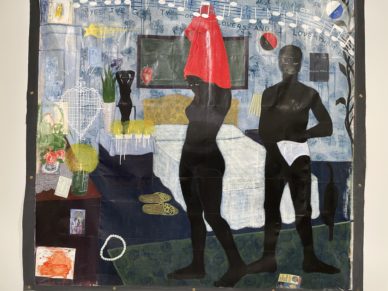 This is the case for the giant of American painting, Kerry James Marshall (born in 1955), who composes scenes from daily life, like those depicted in the 18th century, populated by African-American figures who until now have been largely absent from the history of painting. His unique style, which has since been widely copied, has a powerful message. (See the report about the Kerry James Marshall retrospective at the Met Breuer). 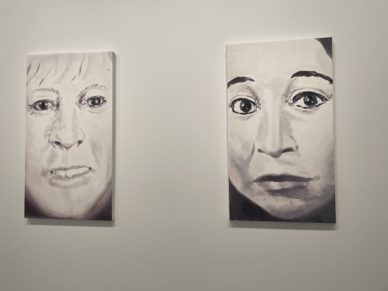 This is also the case for Marlene Dumas (born in 1953), the South African painter who lives in Amsterdam, who has also created a unique visual genre that addresses the human condition in a way that is simultaneously sensitive yet simple. Her canvases, seen up close, are composed of great bursts of colour, which verge on abstraction (see the report about the Marlene Dumas retrospective at the Tate Modern). 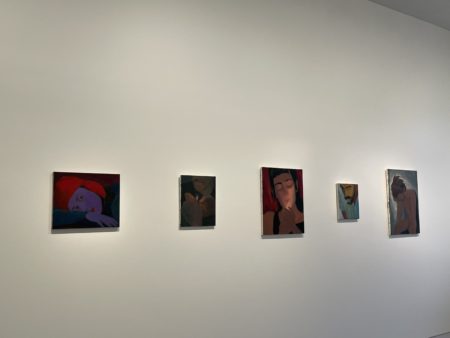 And then there are the new talents, the discoveries like the American artist who lives in Geneva, Ser Serpas (born in 1995), who portrays on very powerful canvases that are even fixed to the wall, pieces of bodies inspired by photos (I will soon be publishing a report on her). The promising Chinese artist who lives in Paris, Xinyi Cheng (born in 1989), examines the attitudes of awkward youths in a multicoloured expressionist painting style (see here the interview with Xinyi Cheng). 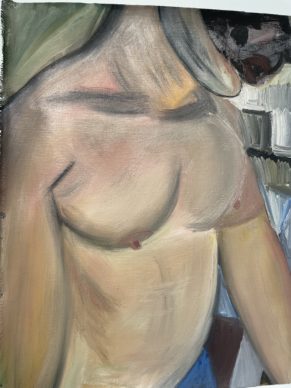 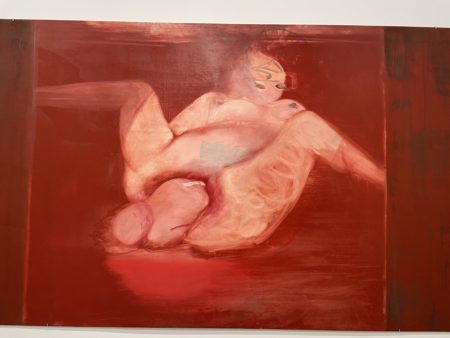 Here we also witness on a similar level a surge of figurative painting that is in perfect alignment with the times. Take the Swiss artist Miriam Cahn (born in 1949) who was discovered late: her raw, gelatinous and colourful bodies resemble distressing apparitions, heirs to traumas that are well known to us. However, paintings by the French artist who lives in Los Angeles, Claire Tabouret (born in 1981), seem a little weak in contrast to the strength and genius, among others, of her senior, Marlene Dumas. 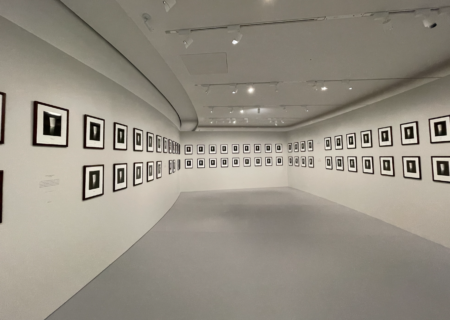 One section of the inaugural exhibition is dedicated to the more conceptual side of photography, with works by Michel Journiac, Louise Lawler and Cindy Sherman. 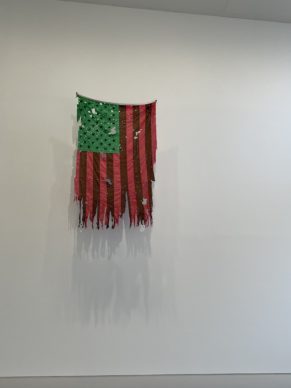 Lastly, a major space has been set aside for one American artist, a pioneer who has become a living legend with an aura of mystery, David Hammons (born in 1943). This artist who takes great care to avoid the star system of the galleries is now displayed across an entire space with 30 artworks. As a direct heir to Marcel Duchamp, he conceives hybrid objects, readymades, which often address the reality of the status of African-Americans. 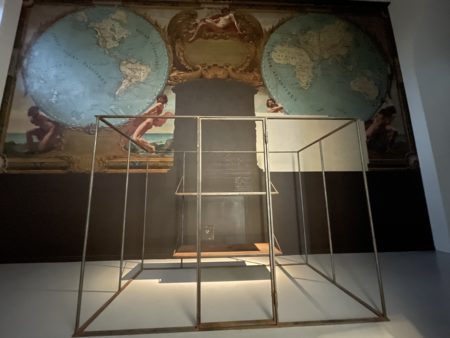 The most troubling piece by him displayed at the Bourse de Commerce has never before been seen. “Minimum Security” from 2007 is the ghostly three-dimensional metal outline of a prison cell in Alcatraz, announced in a film at the start of the exhibition layout.

A bridge between Paris and New York 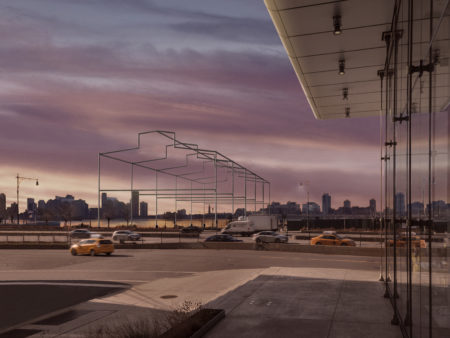 David Hammons is also the subject of an exceptional project that is currently being inaugurated in New York, just in front of the Whitney Museum: “Day’s End”. It’s a tribute to an old artwork by Gordon Matta-Clark, which the latter made on an architectural scale and which we will soon be talking about here. It takes the same principle as the ghostly metal outline to create a drawing from a memory. David Hammons, through his depiction of memories using metal lines, weaves a symbolic bridge between Paris and New York, at a time when flight connections remain a virtual impossibility for ordinary people.

The collector’s return to his country

This season, as French museums reopen, François Pinault’s collections will be on display not only at the Bourse de Commerce but also at the Mucem in Marseille with 20 works by Jeff Koons, in his native Brittany in Rennes at the Couvent des Jacobins, at the Bibliothèque Nationale in Paris with a selection of photos by Henri Cartier-Bresson and as part of the Anne Imhof exhibition at the Palais de Tokyo (which we will be reporting on presently) with an exceptional series of nine paintings by Sigmar Polke. This marks the collector’s masterful return to the country of his birth.

Urs Fischer: the man who liked stories told in 3D. A video interview 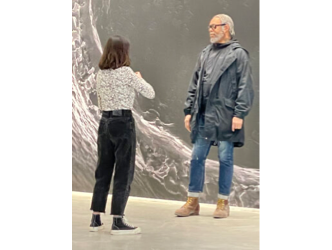