Beyeler Foundation: Olafur Eliasson breaks down the walls of the museum to let in his eco dream

During a public health crisis, the Beyeler Foundation could have contented itself with displaying its Rothkos, Monets, Giacomettis… from the permanent collection amassed by its founder, the dealer Ernst Beyeler (1921-2010). When the latter invited me to visit his site, which had just opened, looking out through the large windows of the building housing the institution designed by Renzo Piano, he cried out: “There’s my Sainte Victoire!” He was referring to his taste for contemplating the surrounding nature following the example of Paul Cézanne, who chose the little mountain just behind Aix-en-Provence as his preferred subject.

It was somewhat in an extension of this spirit that the director of the Beyeler Foundation, Samuel Keller, agreed to stage a crazy project at the site, on view until July, which is called “Life”. 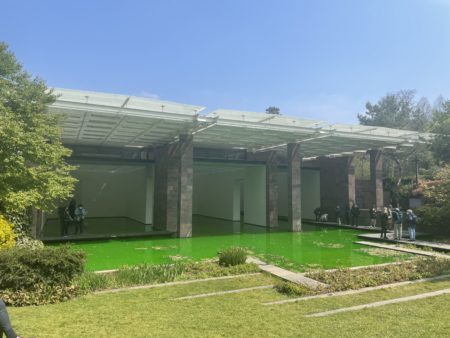 It was conceived by the Danish-Icelandic art superstar Olafur Eliasson (born in 1967), who was the subject of a retrospective at the Tate  in 2019 then the Guggenheim in Bilbao (See here and here interviews of Olafur Eliasson). As the name indicates, of course it would be better to experience “Life” live, in a physical sense. One would note that he had fully removed the windows from one side of the building to literally allow the little pool to enter the architecture, with Renzo Piano’s blessing (1). (See here the interview of Samuel Keller speaking about the installation of Philippe Parreno) 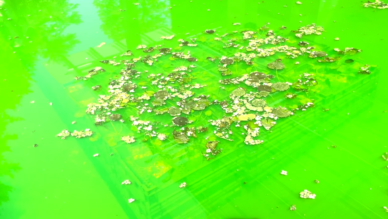 He has tinted the water with uranine, a fluorescent green colour usually used for tracing the flow of water. Overlooking it is a wooden walkway which enables viewers to also observe the flora which he has had arranged following the advice of the Swiss landscape architect Günther Vogt. 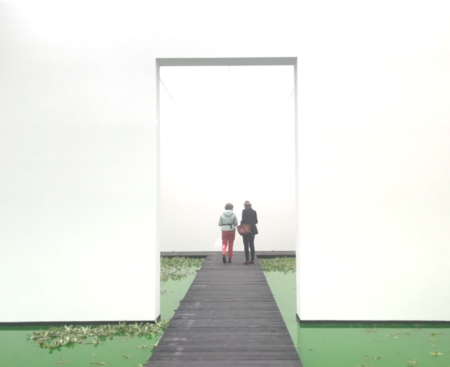 The result is striking. In a very Beyeler spirit, it is both a place of contemplation, before which many visitors camp out day and night (the park remains open 24 hours a day), but also a presentation of minimal art, composed of cubes. The fluorescent green plays in contrast against the white of the walls. It could also be integrated with a new eco Land Art to caution us against the excesses of the human presence in nature.

But for all those who do not have the opportunity to visit, the Beyeler Foundation is proposing a very creative offering and way of understanding “Life”. Various cameras are active day and night, showing a live stream of the site with all its colourful variations due to the optical filters installed by Eliasson. A camera transmits the images from the installation and its context in a kaleidoscopic vision.

The artist plays with this technology to observe all the elements in this together, humans, leaves, flowers, insects and animals which come and explore, like the ducks that love to wander around. He has also made a 3-minute introductory film. 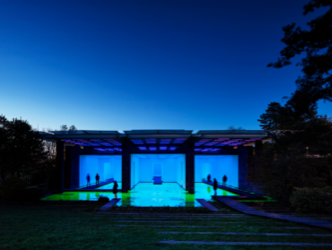 He says: “We carry nearly a kilo of bacteria inside us, inside our bodies. We are like walking caravans transporting all these other species.” 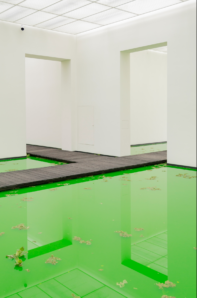 This shedding light on the conception of the human body clearly makes us think of the virus, public enemy number one, which has slowed the spinning of the earth for over a year now.

Thanks to “Life”, Olafur is dreaming of helping us to “understand the time needed to encounter a work of art, to dive into it, be at one with it”. A project that is at the same time intellectual, sensitive and sensual. But swimming is strictly forbidden.

During the month of July the installation will be gradually dismantled live.

(1) Ordinarily, the little pool along with the waterlilies also contains an installation by Philippe Parreno, which the director of the Beyeler Foundation considers to be one of his favourite artworks.