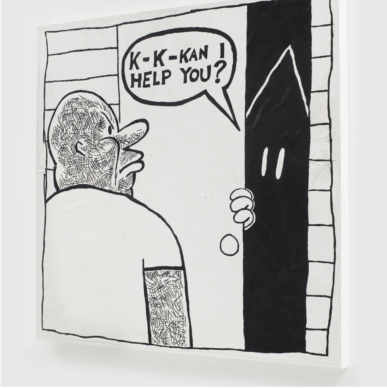 No foreign visitors, or only very few… Frieze New York, the first fair to effectively take place on American soil since the outbreak of the pandemic, is receiving very few – if any – foreign visitors between 5 and 9 May 2021. The show, which up until now has been based in a remote area of Manhattan, Randall’s Island, was the subject of considerable criticism. 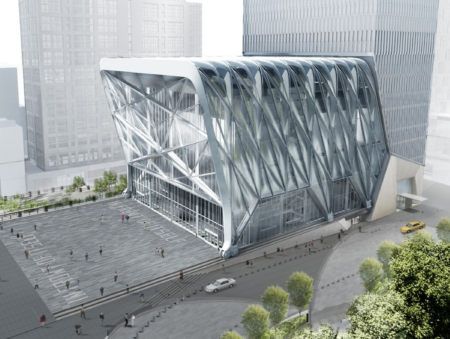 So now it has landed right in the centre of the city at a new site usually reserved for performances, with innovative modular architecture: The Shed, inaugurated in 2019. The public health regulations, combined with the relative smallness of this new space, means that only 60 exhibitors are being admitted. (See the story about the Shed here) 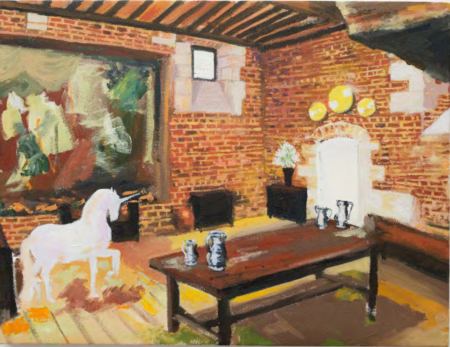 However there are 160 in the virtual program dubbed the “Frieze Viewing Room” which is being held until 14 May. Despite all these contingencies, no one is casting any doubt on the operation’s success.

Starting with its director Rebecca Siegel. “Everyone here has suffered from the isolation and wants gatherings to take place again. This spring is very optimistic, and there’s a real awakening fuelled by significant demand for art. Business has been very encouraging at galleries in recent months.”

New York is the global epicentre for the consumption of contemporary art. The fair is  not counting on  the usual visitors and others who are merely curious, but on real potential buyers. Its position seems to be openly elitist, since all the entry tickets sold out well in advance of the opening of the event, even though their prices were prohibitive: between 65 and 265 dollars. A price never imposed by a fair before now.

In the quasi-euphoric context of the art market’s “reopening”, numerous galleries have played their part by launching ambitious operations at the fair, or to coincide with the fair, in the city.

Such is the case, for example, for the Pace Gallery (eight spaces around the world) who are playing the game with excellence. Founded by Arne Glimcher (See here an interview of Arne Glimcher about Rothko), who was close to huge talents like Mark Rothko, it is now run by his son Marc, who appears to have had various strategic successes over the past few weeks. 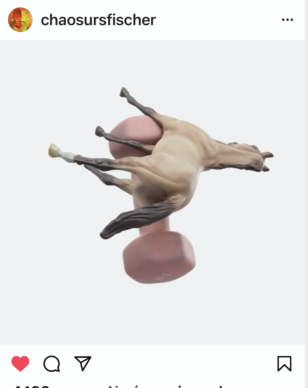 It is Pace who have presented the new NFT works (1) by the high-profile artist Urs Fischer, who is ordinarily represented by the gallery considered to be a global leader, Gagosian (See here the interview of Urs Fischer about his last exhibition in Paris). It is also Pace who have announced they will now be exclusively representing the contemporary art superstar Jeff Koons. Up until now Koons’s interests were defended by Larry Gagosian and David Zwirner, another art market colossus (2). (See here the interview of Jeff Koons in Paris) 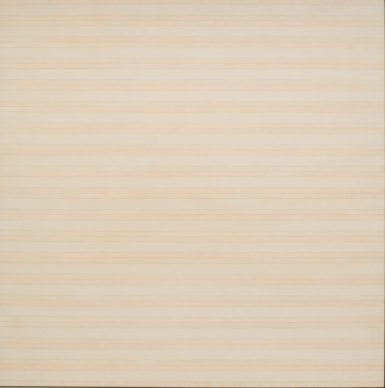 At Frieze, the gallery that possesses an entire building in Chelsea is exhibiting – as a demonstration of power – one of the great classics of American abstraction who is highly prized by insiders but whose works are rarely seen on the market, Agnes Martin (1912-2004). There are fourteen of her works on the theme of her use of colour over time. However the gallery is refusing to list the prices, like that of a painting by Martin presented at Frieze. Her record price at auction was obtained in 2016 for a painting from 1965 which sold for 9.3 million dollars.

Women in the art 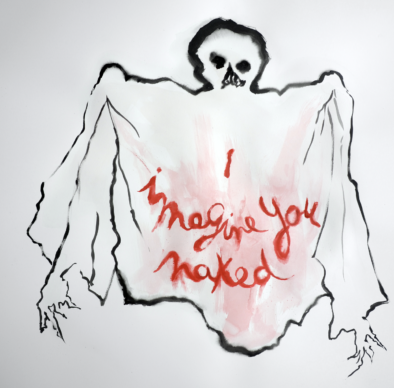 Women are in favour at Frieze this year, much like in the art world in general.

Marian Goodman asked the French artist Annette Messager (born in 1943) to conceive a project to fill the entirety of their booth, and in particular to reinstall a work from 2019, “Petite Babylone”, which depicts a ghost town populated by strange figures, shadows and animals. You can’t help but see a link here with the atmosphere of a deserted New York at the beginning of the pandemic. 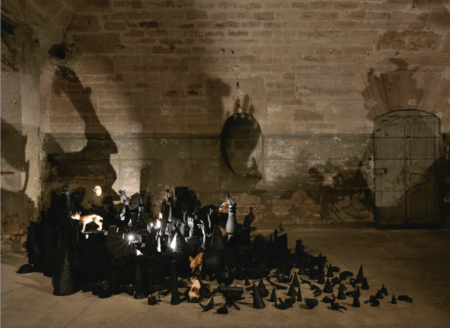 Among other pieces, there are numerous drawings by the French artist. “I made a lot of drawings during lockdown, some of them of things that were amusing, others less so,” says Annette Messager, who was prevented from travelling to New York by the American embassy in Paris, despite her installation project at the booth. (See other interview of Annette Messager here)

With regards to the public health crisis that hit New York hard, Jessie Washburne-Harris at Marian Goodman explains that the prices weren’t adjusted: “At the start of the pandemic, like everyone else I think, we wondered if it was the end of life as we knew it. There was a real pause in buying art, if you don’t count the collectors who were looking for ‘opportunities’. But what kind of dealer are you if you reduce the prices of your artists to sell at all costs? Observing the calm way in which Marian Goodman faced this crisis was a big lesson for me. Today collectors are asking for discounts, but not really any more than they were two years ago.” At the booth, Annette Messager’s drawings are on sale from 14, 000 euros and the installations go up to 180,000 euros. 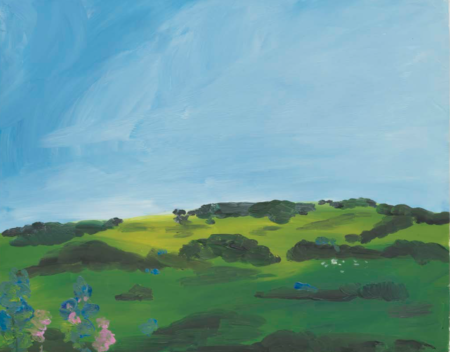 The Zurich gallery Eva Presenhuber, also based in New York, are dedicating their booth to the American painter Karen Kilimnik (born in 1955) who acted as a trailblazer in a style that is very on trend today, figuration that verges on illustration, animated by a spirit of romance. Bright colours, explicit references to art history… These days she is promoted exclusively by the Eva Presenhuber and Spruth-Mager galleries. “She has designed the booth with wallpaper inspired by the 17th century. We have big projects with her in the future, and we think there will be a resurgence of interest in her work in the coming years,” explains Jill McLennon at Eva Presenhuber in New York,” who adds: “The collectors have a greater awareness of their means than ever. There is high demand for works under 100,000 dollars. They want to derive pleasure from what they’re going to hang on their walls.” There are 16 works presented by Karen Kilimnik, dating from 1982 to 2017, on sale starting at 60,000 dollars for the paintings.

One of the preoccupations currently rocking the art world concerns how to showcase African-American artists. James Cohan from New York didn’t expect the current vogue for promoting the work of Trenton Doyle Hancock (born in 1974), an African-American who was born in Paris Texas, whom he has exhibited since 1999. 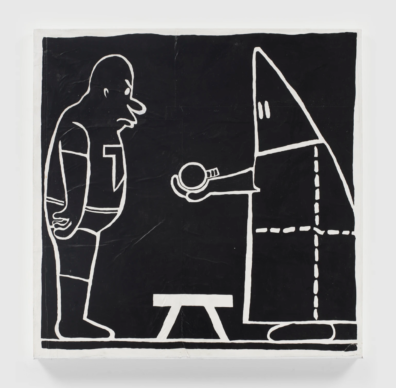 Trenton invented a superhero, Torpido Boy, who pays homage, in a new series, to the creation of the American painter Philip Guston. A Guston retrospective was cancelled in October 2020 in England and the United States following controversy over some of his paintings, which feature figures from the Ku Klux Klan. Guston, however, cannot be accused of being racist. This iconography is taken up again by Trenton Doyle Hancock in a new series unveiled at Frieze. “It’s the first time he has addressed the subject of racism directly,” explains the gallerist.

The artist has been the subject of various exhibitions lately, including at MassMoca, the major museum in Massachusetts, in 2019 and at the Menil collection in Houston that same year. His paintings are on sale for 38,000 dollars. 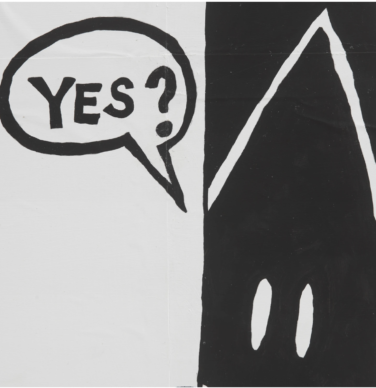 The local public fascination for art

While the pandemic is not yet over, but the market is slowly starting to function again, its organizers are caught between the desire to be more moral by taking on the role of spokespersons for the big social issues of the moment, while also taking care to exclude those who don’t have access to consuming art. Regardless of the restrictions imposed by the public health regulations, given the price of the tickets there is little opportunity for those who are simply curious about art to access Frieze New York this year. This is a shame. The strength of New York as a platform for art lies not only in its consumerist virtues but also in the local public’s fascination with modern-day creation.

(1) NFT artworks are virtual works presented using blockchain with a guarantee of ownership and a unique character.

(2) Jeff Koons is the subject of a monographic exhibition from 19 May at the Mucem in Marseille in collaboration with the Pinault collections.

On How To Become Francis Bacon’s Friend

Alex Katz: A little painting lesson from the veteran of American Pop Art and his next project in the New York metro