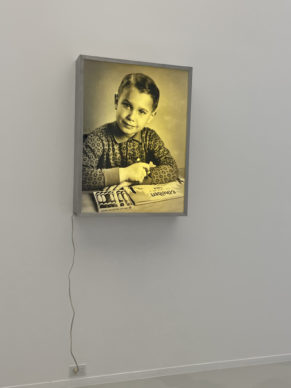 In the early French Renaissance when King Francis I assembled the greatest artists of the time, such as Leonardo da Vinci, in the West, or closer to the present day during the postwar period when the United States extended its cultural power across Europe, and when for example President Kennedy and his wife Jackie hosted high-profile artists at the White House, “soft power” was a term that had yet to be coined but it was practiced all the same. 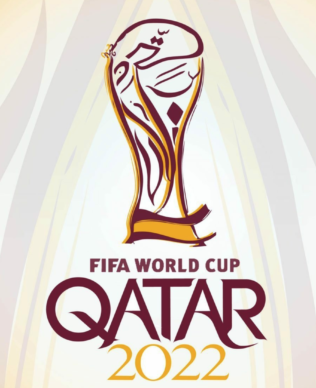 Now the idea has spread across the entire planet, and the Gulf region is one of the preferred practice grounds for this political action. In Doha in Qatar, soft power is expressed mainly via sport and via art. In 2022 the football World Cup will be taking place in this small yet powerful oil-producing country.

A museum for western art

In the meantime, and ahead of the opening in 5 years minimum of a museum dedicated to western art designed by the Pritzker Prize winning architect Alejandro Aravena, you can visit an exceptional exhibition until 31 March at Al Riwaq in the centre of Doha dedicated to Jeff Koons. 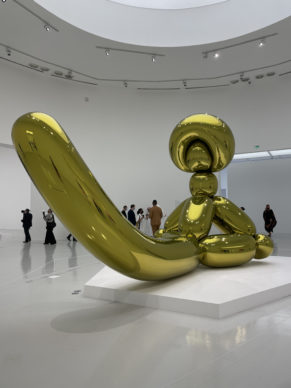 It is exceptional in its scale and in the scale of the works on display ( See here the report about Jeff Koons at Le Mucem in Marseille and here the report about his public art in Paris, “Bouquet de tulipes”. Around a hundred pieces by the American artist are on show in the form of a retrospective for the first time in the Middle East. The curator is the artistic director of the New Museum in New York, Massimiliano Gioni.

At the exhibition’s opening, a unique event took place which seems like it could only happen in Qatar. The president of Fifa Gianni Infantino and football star David Beckham came to visit the exhibition. Clearly under such circumstances nobody could allow themselves to speak badly of the work of Jeff Koons. However I was curious to ask them about it. Jeff Koons has even said himself: “I don’t really think in terms of high and low culture. I don’t believe in kitsch. I don’t even like that word because it implies looking down on something or someone”. 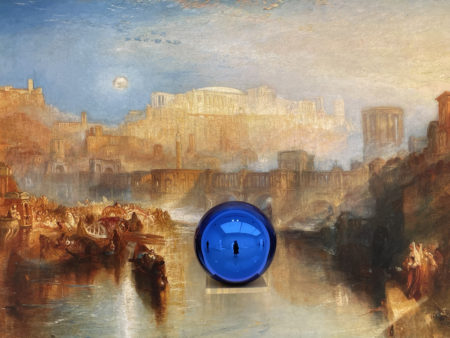 When questioning David Beckham, who spent a long time in close conversation with the American artist, in the exhibition, it transpired that he felt a great deal of emotion that corresponds ultimately with Koons’s desire to create a kind of art that speaks to non-specialists.

A great moment of my life

The footballer told me: “I was very lucky to spend several hours with Jeff. It was a privilege: he guided me through the rooms himself. It was one of the great moments of my life. He’s someone who I admire. Art corresponds to a personal emotion. I buy it out of love but it’s fascinating to learn exactly what the artist was feeling. Standing next to Jeff looking at one piece after another and understanding what he’s thinking is a very special experience.” The footballer even implied that he owned one of his pieces. 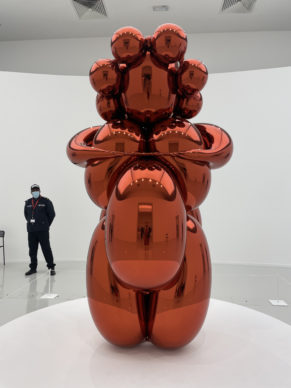 Jeff Koons, for his part, was delighted by the footballer’s kindness and attention. As the exhibition “Lost in America” is a retrospective, I asked him if he sees all the pieces on display in the same satisfactory light. “It is impossible to always be equal in your work. I don’t destroy anything because I’ve thought a lot about each piece upfront. They involve a long and costly work of execution. Each one represents a specific moment.” 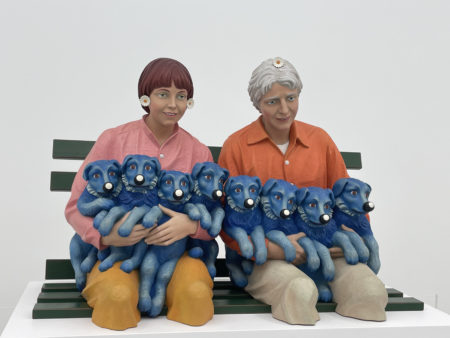 The title of the exhibition might invite numerous interpretations on the part of an artist who extensively addresses popular American culture. Starting with his blue metallic “gazing balls”, which have a strong presence at the Doha show, in reference to the decorative elements you find in American gardens and which he introduces in reproductions of famous artworks. 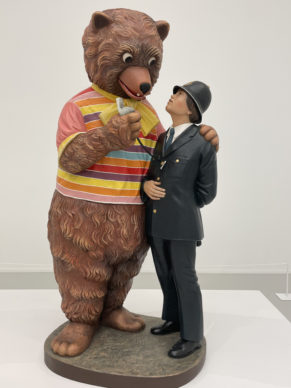 I ask him if the title “Lost in America” was chosen while Trump was still in power. He replies with an excellent pivot, which is typical of him: “The exhibition developed over a number of years. But if this is a question of knowing whether American politics was disappointing during those years, then the answer is yes. But the title doesn’t really have a meaning other than to distinguish it from other possible titles like ‘Jeff Koons in America’.” 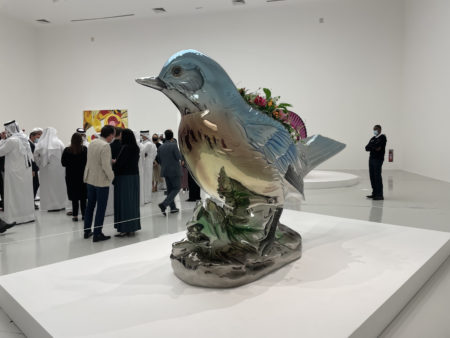 Jeff Koons never complains. So, strangely, one of the observations that can be made about this ultra-famous artist is that there is an absence of in-depth and critical approaches to his work. The majority of observers take his pieces at surface value, these perfect images linked to popular culture, reworked often in trompe l’oeil materials, in formats that magnify everyday objects. The artist is content to wait: “it takes time for people to absorb things, especially when it touches on societal issues.”

However Massimiliano Gioni doesn’t refrain from intellectualising the practice. “It’s a biography of Koons linked to popular American culture. From his famous Rabbit to Party Head (a sculpture which we see for the first time) it’s an intimate conversation with Jeff, as shown well in the texts in the catalogue.

The weight of the prices 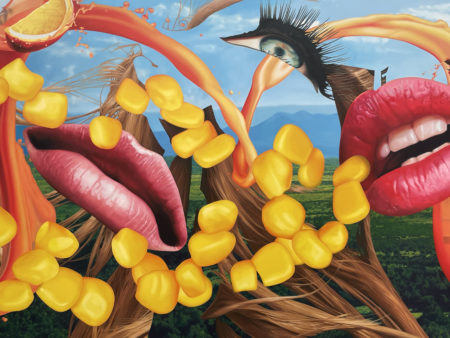 His work gets buried beneath the weight of the prices his art obtains, but I think these things are far more complex than a simple glorification of our present. And when you think about it, not only is the idea of the mirrored surface a key element in his oeuvre but we can also see this exhibition as a self-portrait. This exhibition, which is very spread out in the space, has more of an architectural dimension to it than, for example, the retrospective at the Whitney Museum.” 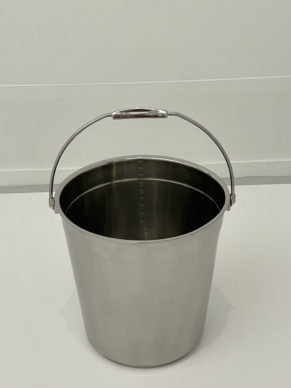 One of the great successes of “Lost in America” is precisely the fact that the mirroring effect takes full advantage of the dimension of the pieces. His Balloon Monkey (yellow) is 5.9 metres long. Among the most radical works exhibited there is a simple steel bucket from 1986, directly referencing Marcel Duchamp.

They are places for everything

From the “Made in Heaven” series from 1989-1991, known for its sexual scenes featuring Cicciolina, there are sculptures that are entirely chaste, like a painted wooden poodle or a self-portrait in marble. “There are places for everything,” concluded the artist with regard to the absence of explicit artworks in a country where the state religion is Islam. 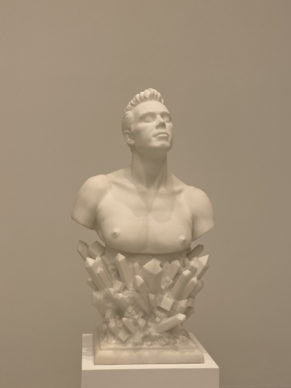