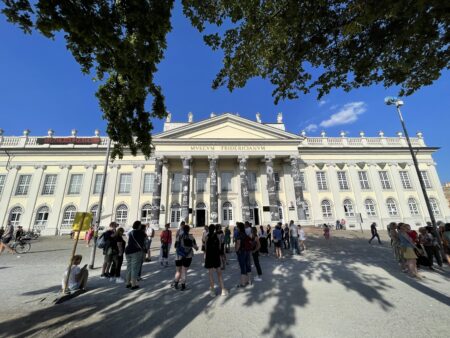 For the fifteenth edition of Documenta in Kassel public opinion of the art, since most people will not have travelled to the little German town, will retain what was the most publicized element of the show: the accusations of antisemitism. Or how, among other things, a major event on the global contemporary art scene, taking place in the country where the Jewish genocide originated, agreed to recognize and exhibit an XXL fresco featuring a detail employing classic antisemitic iconography which was particularly fashionable during the time of the Nazis. A pig’s head marked with the star of David… baptized Mossad, after the name of the Israeli secret services. 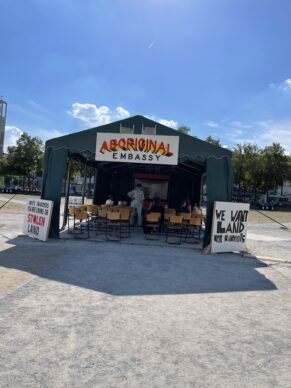 This work, which was made by a collective of Indonesian artists known as Taring Padi, was immediately withdrawn. The collective apologized without anyone truly understanding the content of the initial gesture (officially they claim to have been unaware of the symbolism of this iconography) and Sabine Schormann, director general of Documenta, resigned. 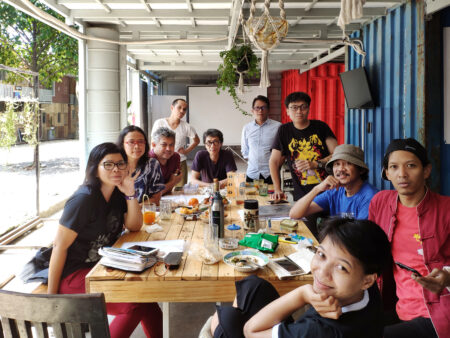 I made the trip to Documenta. The show, overseen by Ruangrupa, a collective from Jakarta, piqued my curiosity. When their curatorship was announced I was excited by the idea that a group of people, living on the other side the world, was going to direct such a show with new preoccupations. The idea of a collective is fascinating thing. It banishes the principle of the ego. It speaks to generosity, to effervescent creation and to sharing.

At a time when so many things across so many areas are being called into question, this could have been something exciting. Indonesia is not much talked about in Europe, but it is home to an interesting wellspring of creativity, no doubt. See for example the writer  from Indonesia Eka Kurniawan, who deserved to win the Nobel Prize for Literature, author of the book “Beauty is a Wound”. 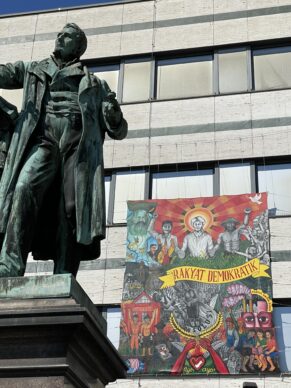 So I travelled to Kassel. I tried to meet with the curators of the exhibition. The press office only offered me a ticket for entry. I also tried to contact an artist who was participating in Documenta and who I find admirable and courageous, the Cuban political dissident Tania Bruguera. Here once again my quest proved unfruitful.

An other fresco by Taring Padi 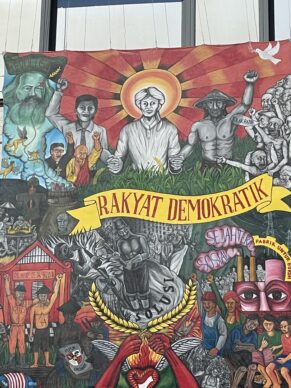 But the first thing I saw on arriving in Kassel was another fresco by the Taring Padi collective installed in the town’s central square, on the front of the large C&A store. The collective’s apology was enough, in the eyes of the organizers, to warrant keeping the rest of their work in place. This seems to be the most shocking thing about the whole chapter.

It is a fresco in colours and black and white, a stylistic heir to Diego Rivera, across which is written in large letters the name of the now defunct Indonesian socialist party. 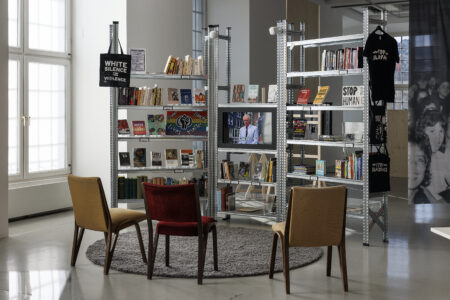 As for the rest, across all the sites that I visited Documenta didn’t resemble an exhibition so much as a sort of large-scale town fête, where you wait for an effervescence which never comes. The fifteenth edition of Documenta is not an exhibition, it’s a demonstration. It never takes into account the artistic form but only that of a context driven by politics. 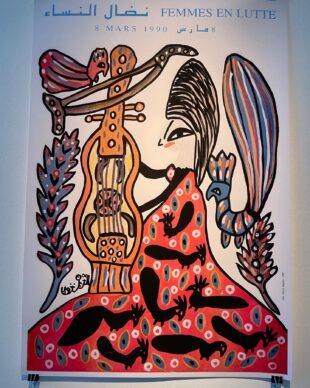 The aim is to talk about all those who have been forgotten in art. And why not? This could be a good idea, but here again the curators are not taking into account the artistic form. So in a haphazard display there are artists who have problems of a psychiatric nature, Palestinians, others from the Roma community, from Haiti, Algerian women, from the black community in Holland, aborigines displaced from their territory. Only Vietnamese immigrants are allowed to come and plant seeds in a charming little garden that’s part of the show… 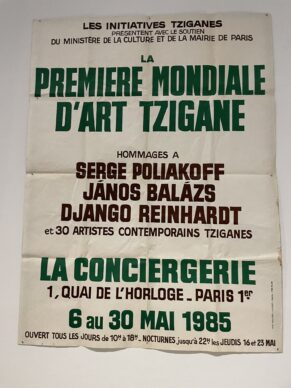 The most interesting part of the exhibition site is the Documenta Halle which contains collaborative Thai craftsmanship, a skateboarding ramp, and above all the projection of an extraordinary film, “Kung Fu Kommando”, magnificent in its innocence , produced in a Kampala slum by Ramon Productions otherwise known as Wakaliwood. Made by Nabwana IGG, it tells the story of a footballer whose dribbling is a lethal weapon. 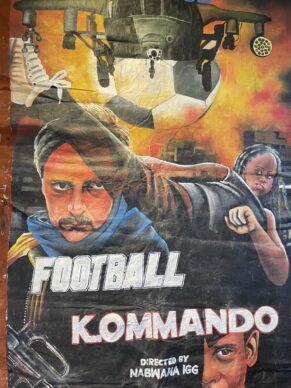 It has all been filmed in the slum with the aid of some very kitsch special effects, which lend a certain crazy charm to this makeshift film. But even here Documenta hasn’t really succeeded in innovating, since in 2019 the Palais de Tokyo, on the initiative of the Sam Art projects foundation, invited the artist Louis Cyprien Rials who collaborated with the studio to create a Rashomon (the masterpiece by Japanese filmmaker Kurosawa) in a Ugandan version.

Easy to read but empty

Despite its goodwill in trying to repair the world’s injustices, Documenta 15 suffers from a striking intellectual and formal poverty. A mini guide to the show described as “easy to read” explains it as follows: “An exhibition is a special event. Visitors can look at different works of art. Works of art are things like: paintings and art figures, photographs and films, special events: Visitors can do many things there. For example talk to other people.” 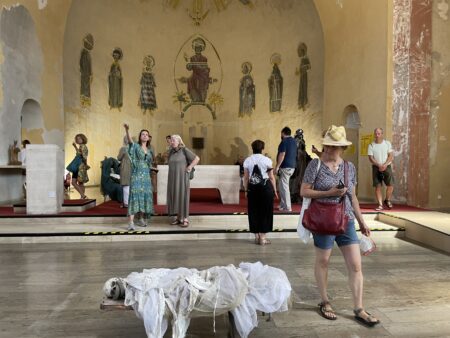 The attempt to revolutionize the perspective on the art of today has well and truly failed.