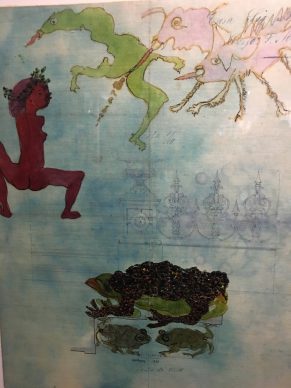 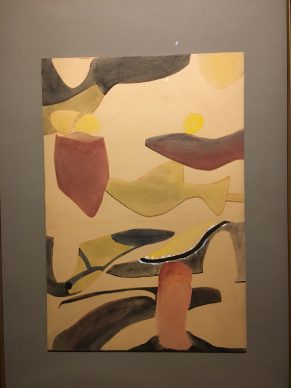 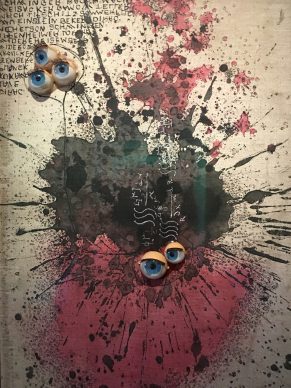 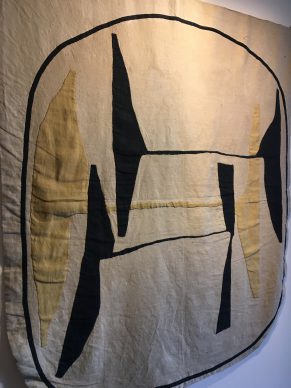 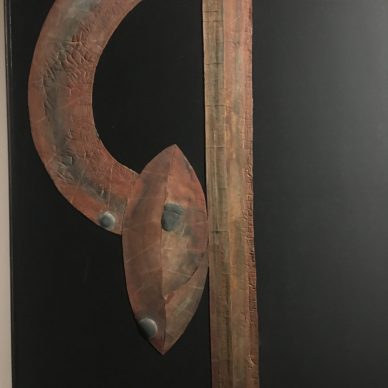 Overlooked during her lifetime, Carol Rama is enjoying a spectacular success two years after she died at the age of 97.

Currently the Palazzo Ca’Nova in Venice and the New Museum in New York are both showing the artist’s work.

So how does one explain the lack of success during her lifetime? We might point to her unclassifiable work, with its stylistic changes every 10 years, or we might point to her Turin-based dealer Giancarlo Salzano who represented her between the 1970s and the 2000s and was more intellectual than commercially minded.

Nevertheless at the 2003 Venice Biennale Carol Rama was awarded a Golden Lion.

But the major turning point for her legacy was in France when in 2015 the Musée d’art moderne de la ville de Paris staged a remarkable retrospective of her work. (1)

Her watercolours in the ’30s take sexuality as their main theme. The images bring to mind Art Brut, only more delicate, as well as Louise Bourgeois’ watercolours, only more explicit.

Carol Rama explored numerous genres. Her fetishism for certain objects (such as shoes) could connect her to Pop Art, however her tormented figures resemble the expressionism of someone like Schiele.

After the war she also explored abstraction and, for a while, was able to be associated with Arte Povera after including  tyres in her compositions (her home town of Turin is the Italian capital of car manufacturing).
It was at the Musée d’art Moderne de la ville de Paris  that the New York dealer Fergus McCaffrey (who has made his mark on the recent international landscape by  showing artists such as Sigmar Polke and activists from the Japanese Gutaï movement) discovered the true breadth of her work.

‘I became a keen collector before organising an exhibition containing 50 of her works last September,’ explains McCaffrey. ‘The reaction from the museum world was extraordinary. A combination of factors has seen her prices rise spectacularly. Nevertheless they remain ridiculously low compared to other male Italian artists from the same period, like Piero Manzoni,’ adds the New York dealer who is presenting some of her works at the Basel fair, priced at between $80,000 and $1 million.

According to the databank Artprice, the prices achieved at auction are substantially lower than in galleries.

What we see is a market that is rapidly evolving.

As of June 2015, the highest sum paid at auction for Carol Rama was 80,600 euros.
Last summer Dominique Levy’s influential gallery with locations in New York, Los Angeles and London (prior to it becoming Levy-Gorvy last December) announced that it would be representing the artist in collaboration with Berlin’s Galerie Isabella Bortolozzi and as agreed with the Carol Rama archives.
‘Strictly speaking there is no Carol Rama estate,’ notes McCaffrey. The Carol Rama archives contain no works. They’re responsible for authenticating her work.’
Two of the members of Archivio Carol Rama, founded in 2010 and responsible for authoring the catalogue raisonné for the past three years, Cristina Mundici and Raffaella Roddolo, explained the roles assigned to them:

They spoke about how during her life Carol Rama lived in poverty in Turin.

‘She was in the habit of swapping paintings for all kinds of things. She did it with the greengrocer and the hairdresser. All these people, with almost no knowledge of art, now own Carol Ramas.’

At  ArtBasel, Isabella Bortolozzi who has been working with Carol Rama’s art for 10 years, will be selling her works for between 30,000 and 300,000 euros.

‘Her prices have risen significantly but she remains more affordable than other young artists I represent like Oscar Murillo (born 1986).’

Isabella Bortolozzi observes that the value of Rama’s artworks depends on a conjunction of elements including their pedigree and the period when they were made.

Isabella Bortolozzi also says that the ‘Belle Arti’, the Italian academy of fine arts, will assess the possibility of transforming Carol Rama’s apartment in Turin into a museum, complete with its entire contents. A way of understanding this extraordinary universe.

In the excellent exhibition catalogue from 2015 in Paris, the Spanish philosopher Paul B. Preciado wrote,

‘Amputated from history in 1945, Rama’s work would reappear at a later date, insistently and painfully, like a phantom limb.’