The landscape is pure Cézanne. In any case, Sainte-Victoire isn’t too far away. The light is golden, as it always is this time of year in Provence. The estate is pungent with the scent of pines growing all over the property, surrounding 130 hectares (321 acres) of vineyards. You are at Château La Coste, in the small municipality of Puy-Sainte Réparade, close to Aix-en-Provence. It is here, among a 230-hectare (568-acre) stretch of nature, that an Irish businessman has set up a site combining grape growing (for biodynamic wine) with architecture and art.

The experience is exceptional. On a smaller scale, it’s in the same vein as those offered in Naoshima, in Japan’s Inland Sea, and Inhotim, in Brasil’s Mias Gerais. But other than the noticeably more restrained format of the art on view, the difference lies in the fact that you feel good here—really good. One bit of advice, though: avoid the busy summer period so as to fully enjoy what Château La Coste has to offer.

Secretive and discreet, Paddy McKillen bought the property in 2002 and started the contemporary art itinerary peppered around it in 2011. Within the estate’s natural setting, the itinerary’s 26 monumental works are the subjects of a sort of treasure hunt whose beauty leaves you breathless. The owner’s personal taste is solely responsible for the choice of art on display and, so far, nothing he’s chosen disappoints.

A very pared-down first offering welcomes you to Château La Coste: a long-walled concrete building with an immense plate-glass window, designed by Tadao Ando. Out front lies a reflecting pool, over which an immense Louise Bourgeois spider—for the artist, a symbol of the mother—reigns queen-like. McKillen is one of two sons and nine siblings; obviously, his mother played a key role among them.

The rest of the visit is definitely less urban, as exemplified by Andy Goldsworthy’s gigantic subterranean nest, a mysterious shelter whose arches are made of interlaced branches. In the pine forest, Tracey Emin, the very trashy British artist who usually expounds on her chaotic love life, has created an elevated wood walkway that leads to a barrel; inside it is a sculpture representing a kitten—a self-portrait, we are told. The usually delirious artist Tunga has conceived a series of three sculptures composed of enormous wooden gallows from which hang crystal-like shapes, like objects in a primitive rite. Korean artist Lee Ufan has imagined a small pavilion whose interior leads to two abstract paintings, which scan the space. In another intervention, Tadao Ando has encased a small medieval shepherd’s chapel in glass, jewel box–like, while the cross with red blown-glass balls at its entrance is by Jean-Michel Othoniel. Finally, American architect Frank Gehry has designed an auditorium that resembles a loose assemblage of giant logs set in nature.

A number of buildings and artworks remain in the works, such as one designed by Brazilian architectural genius Oscar Niemeyer before his death and a humongous Louise Bourgeois piece exhibited at the Tate in London in 2000, currently in the installation stage at La Coste. For his part, architect Jean-Michel Wilmotte has repurposed a former cellar into an exhibition space where, until the end of October, some 20 works illustrate the colors and abstract patterns favored by another Irishman, painter Sean Scully. Hung with flair, the whole may be conceived as a single work of art, a giant compositional patchwork along three walls.

As for the actual cellar, French architect Jean Nouvel designed it. Grape harvest season is now beginning, so a glass of the estate’s rosé may be in order, just so you can continue to savor the calm, contemplative euphoria found at Chateau La Coste. 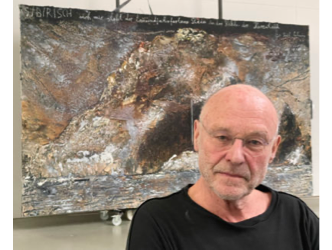