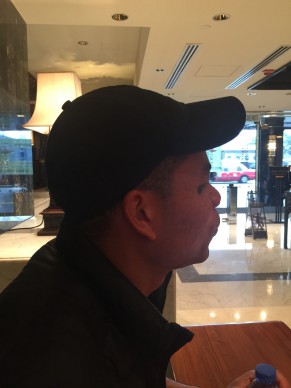 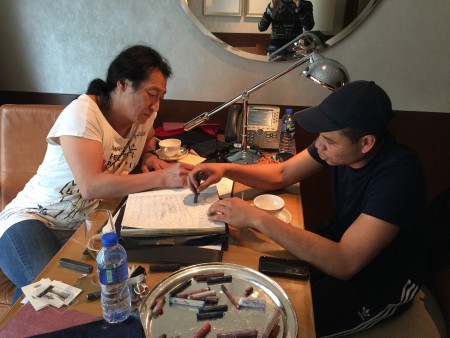 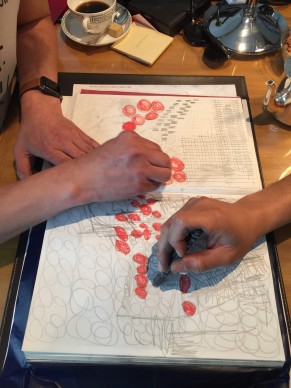 by Yutaka Sone and Oscar Murillo

There are some things that no one except an artist is capable of doing.

So it goes with Oscar Murillo, born in 1986 in Colombia and presently also a British national, who initially succeeded in making quite a bit of noise in the art market.

Critics and commentators, myself included, never tire of observing how an artist’s value can suddenly take off spectacularly without fully understanding the whys and wherefores of the process. In 2011 Murillo’s work could be purchased in the 3,000-euro ballpark. By October 2015, one of his canvases completed three years earlier fetched 329,000 euros at auction. It was a record for Murillo and a significant sum for a 29-year-old artist. Murillo is part of the stable of artists represented by the very powerful David Zwirner Gallery in London, New York and soon Hong Kong, and is also on the books of Marian Goodman, based in Paris, London and New York.

The rising star produces and sells a lot.

Since May 2013 no fewer than 70 of his paintings have gone up for auction. This would be a dangerous situation with suggestions of speculation were it not for the fact that Oscar Murillo’s  museum reputation has increased considerably in the meantime.

He was included in the Forever Now, Painting in the New Millennium show at Moma in New York in 2015, and at the most recent Venice Biennale with a large-scale piece that was placed prominently at the entrance to the international pavilion in the Giardini. He creates installations, he makes video works as well canvases crafted from a patchwork of mistreated elements, kind of tarpaulins that he paints, scribbles on, graffiti’s, covers in dust and also occasionally tramples underfoot.

In Hong Kong, quite spontaneously, Murillo approached me in a lift, very sweetly. I spontaneously asked him how as a young artist he manages to keep a level head when confronted with success. He was happy to answer but only wanted to record his voice, so he grabbed hold of the telephone, angled it not at us but at the hotel lobby, and told me:

But like I said beforehand, there are some things that only an artist is capable of doing.

Murillo explained how his mother presented him with an album of photos from the family’s epic journey following his father’s decision to emigrate from Colombia to Great Britain to improve the family’s opportunities.
The gift from his mother acted like an electric shock on him and while he was sat on the aeroplane heading to Australia on 8 March as a guest of the Sydney Biennale, he decided that his proposal for the event was too trivial.

So he decided to destroy his passport: yes, on the plane.

On arrival he was detained for two days while the authorities verified his identity. His Colombian passport allowed him to travel without a visa to Singapore, then Barcelona, then Madrid, then Bogota where he was able to obtain an official document allowing him to return to London.

While in detention in Australia he wrote a statement that was released by a friend of his.
He explained: ‘I wanted to create entropy, a special situation, a trauma. In fact I didn’t have any pre-established plan. I wanted to know what happens when you’re no longer identifiable. It was a way to reboot, start again from zero like when we arrived from Colombia to London in 1997.

I visited Oscar Murillo once more to attempt to fully grasp this gesture. He was in Hong Kong in his den-like room at the Mandarin Oriental where he was drawing on his large  book, an intimate diary, in the company of Yutaka Sone, the Japanese artist based in Los Angeles. Like two children deep in concentration with their colouring pencils who have found an absorbing activity far removed from the miasmas of the art market at Art Basel Hong Kong.
‘I call this book Room Service,’ he explains, laughing. ‘Since October I have filled 26 pads like this one.’

The Sydney Biennale, deprived of its young star artist, was also the recipient of a pad as a replacement for the initial work.

During a period of mass human migration responsible for global unrest, the artist has taken up personally the problematics of exile in a violent fashion.

by Yutaka Sone and Oscar Murillo