Rarely has a sale been kept secret for so long. On 9 and 10 November Christie’s will be selling 184 lots in New York taken from the collection belonging to the co-founder of Microsoft, Paul Allen, who died in 2018 at the age of 65 from lymphoma. The ensemble has a colossal total estimate – providing fuel for imaginations – of around 1 billion dollars, the highest amount ever attained for a single collection, and was only fully unveiled on 22 October.

You might say that only two weeks to prepare to disperse this mass of artworks representing such a large sum of money is not a lot of time. But it’s more complicated than that. After the businessman died, it was Vulcan, the company run by his sister Jody Allen, which was managing his assets, monetized for charitable purposes. In July 2022 the sale of two of his apartments in New York for 75.9 million dollars, according to the New York Times, and the sale according to Bloomberg, for an unspecified sum, of his yacht named Octopus estimated at 278 million dollars in 2021, have amply filled Vulcan’s coffers. As for the art, in a period of global political and economic instability, Vulcan has played it safe by requesting that Christie’s guarantee (1) all of the lots presented.

Furthermore, not all the works from the Allen collection are being put up for sale. There is talk, for exemple, of a Rothko that won’t be featuring in this auction. We can imagine that the delay in making public the contents of the Allen collection owes to the fact that the staff at Christie’s have been seeking third-party guarantors for each of the 184 lots. (Nobody at Vulcan responded to our request for an interview).

The consequence for the market, which impatiently awaits this sale, is clear: whatever happens, the operation cannot fail. But behind this great financial machine there are some truly exceptional paintings, it must be said. For the most precious among them, Christie’s hasn’t printed any official estimated value in the catalogue.

All of these secrets are consistent with the spirit of Paul Allen, who despite his compulsive taste for acquisitions did so in an almost clandestine fashion. Some of his friends, like the businessman and collector of African art Jean Pigozzi (see here an interview of Jean Pigozzi about his collection), admits that he is astonished. “He was keeping all these masterpieces in Seattle, not talking about them and not letting anything slip, including in his appearance, such sophistication.”

The co-founder of Microsoft, whose curiosity was multifaceted, was also a huge music fan – he made donations in this area to the Museum of Pop Culture in Seattle – and aviation – he was one of the donors to the Flying Heritage and Combat Armor Museum in Washington. But when it came to art he seemed to be less generous with institutions.

He had agreed for an exhibition to be staged featuring 39 of his artworks in 2016 at the Seattle Art Museum. The catalogue includes an interview with him, which is very telling. It was for example David Geffen, founder of the film production company Dreamworks, who informed him he could acquire works worthy of a museum. 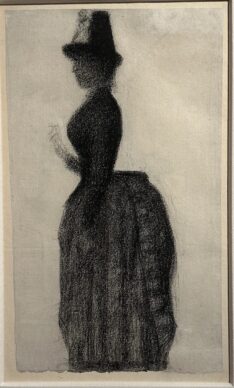 Above all he is revealed as an aesthete who put himself in the creators’ shoes: “Each artist has his own unique view of reality that has to do with his inner state and his inner eye, so he brings you to seeing the world the way he saw it.”

One of the star lots at these auctions, estimated at about 100 million dollars, is a rare painting “Les poseuses” by Georges Seurat, the post-impressionist artist who died at the age of 32. It is a complex work depicting three nude young women in the atelier posing alongside a monumental painting, “Un dimanche après-midi à la Grande-Jatte”, which is now at the Art Institute in Chicago. The specialist Françoise Cachin wrote in 1991 about this version of the Poseuses, during the Seurat retrospective at the Grand Palais: “A homogenous pointillism, both vibrant and resembling silk, weaves from the same seed the women’s flesh, the painting on the wall, the objects and the luminous space which bathes and unifies the ensemble.”

Another version, 25 times bigger and with a rougher workmanship, belongs to the Barnes collection in Philadelphia. “It’s the chance of a lifetime to be able to acquire this work. It is from this perspective that the price is justified,” explains the private Parisian dealer Thomas Seydoux. He couldn’t have said it better, since Allen declared in his interview: “Some artists were not very prolific. I feel very lucky to have a great Seurat, for example”. So lucky, in fact, that he also possessed two drawings using the fascinating technique composed of streaks, by the same Seurat, one of which depicts a young woman in profile wearing a “faux-cul” dress which we also find in “Les poseuses” (estimate: 1 million dollars).

Paul Allen revealed in the same text: “you have to be very careful not to get caught up in a bidding war”. However he did exactly this on numerous occasions. Because several of his acquisitions were record prices at the time.

This was the case for an autumnal forest landscape by the Austrian artist Gustav Klimt, now with an estimate of about 90 million dollars, which he bought for 40.3 million dollars in 2006.

And for “Maternité” by Paul Gauguin executed in 1899 depicting, in shades of yellow and brown, three graceful Polynesian women. The canvas with the record price for the artist in 2004, 39.2 million, is today estimated at about 90 million dollars.

In a contemporary vein, he also made the acquisition in 1998 for 5.3 million dollars of a large-scale painting by the British painter Lucien Freud depicting four figures inspired by Watteau, now with an estimate of about 75 million.

From Botticelli to Johns

The highest estimate, around 125 million dollars, is for a key painting that bore witness to the invention of modernity, a painting from 1888-1890 by Paul Cézanne depicting in pastel hues, animated by touches of vibrancy, the famous Montagne Sainte Victoire. Allen acquired it at auction in 2001 for 38.5 million dollars. Since then the Qatari royal family has raised the prices of the major Cézanne works with the acquisition of the “Joueurs de cartes” (The Card Players) in a private sale for, it would seem, 250 million dollars. 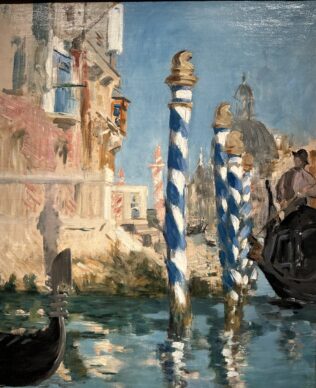 “He alone was the one who chose his paintings. He had advisors but they were more in charge of the administration,” explains the American dealer Bill Acquavella. Among the relatively bold estimates in the sale, at 45 million dollars, there is a small painting in the catalogue which depicts a detail from a Venetian landscape by Edouard Manet. Paul Allen loved Venice, where he owned a palace on the Grand Canal, the Contarini-Fasan palace.

The theme is perhaps not what you would expect from the modern artist but, as the Christie’s expert Adrien Meyer explains: “here we find everything people love in Manet, his shades of black which he found in the great Spanish painters but also the spontaneity of his enchantment during his second and final visit to Venice.”

The most impressive thing about this sale is the high quality artworks, with multiplying factors recorded for the “classic” modern and contemporary paintings, since the 2000s.

(1) the guarantee is a sum fixed ahead of the auction which will be paid to the owner. It may be paid by the auction house. The latter may also find third parties who will guarantee the painting and acquire it in the case of a lack of interest among the buyers.