Pierre Le Tan’s collection at Sotheby’s: the story of the influential Parisian dandy from Vietnamese painting to Hockney 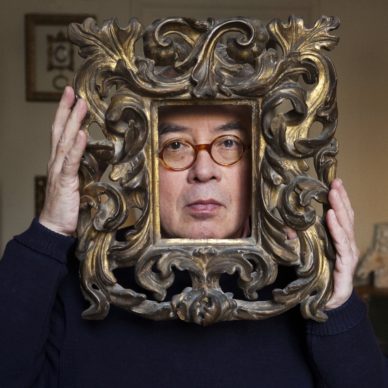 “Art is what makes life more interesting than art.” People tend to slightly overuse this quote by the great Fluxus artist Robert Filliou (1926-1987), but it perfectly articulates a desire for an existence driven by the pursuit of aesthetics in the broad sense. The French illustrator Pierre Le Tan (1950-2019) was one of these people who pursued different kinds of art, which contributed to making his familiar surroundings into a little world of its own.

Epicentre of his life 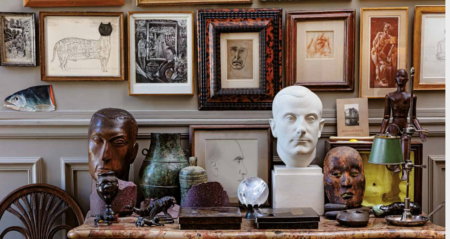 In some ways the epicentre of his life was his home, where he harmoniously accumulated the results of his many treasure hunts. Even back in 1995, Sotheby’s sold an array of 200 objects belonging to him. On 26 March 2021 Sotheby’s will once again be auctioning his final collections in Paris, featuring 184 lots accompanied by another exclusively online sale (430 lots) running until 17 March. The ensemble, with an estimate of 900,000 euros, is infused above all with the spirit of its owner.

Working for the New Yorker 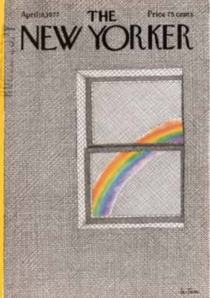 Beyond antiques dealers, which seemed to occupy him extensively with recurrent visits to Hôtel Drouot and the Parisian flea markets, Pierre Le Tan was a draughtsman by trade. From the age of 18 he worked as an illustrator for the New Yorker, for whom he drew numerous covers. In the sale there is an original drawing for one of these covers, dated from 18 November 1977, simply showing a window through which a rainbow appears (estimate 10,000 euros). It’s the drawing by Le Tan with the highest estimate in the sale.

“I exhibited Pierre Le Tan in 1993 when I was first starting out,” reveals the famous French gallerist Emmanuel Perrotin, who adds with humour, “it’s the only exhibition where my parents bought an artwork. I also remember that in order to support me, his father, the famous Vietnamese painter Le Pho, also bought a drawing.” (See other interviews of Emmanuel Perrotin here and here)

Surprising though it may be, it was Pierre Le Tan who, in those years, introduced the British contemporary art superstar Damien Hirst to Emmanuel Perrotin. But according to those close to him Le Tan apparently didn’t like the commercialization of the Young British Artist. “He was absolutely indifferent to trends,” remembers one of his great friends, the fashion designer and long-time collaborator of Karl Lagerfeld, Gilles Dufour: “He was a real mentor to me. He had an English taste, inspired by his first wife, and naturally an Asian taste as well thanks to the education of his father.”

In a book published in 2013 the illustrator described his early childhood collecting: “My father would give me antique items, a Compagnie des Indes cup that was a bit chipped, a fragment of a Chinese painting, an old volume of the Manga, the encyclopaedia drawn by Hokusai who I still consider to be the great Japanese artist, some of whose drawings I have in my possession today.”

The former CEO of Christie’s France, François de Ricqlès, was also very close to this great dandy. He sees a nostalgic streak in him which he shared with his friend, the writer and winner of the Nobel Prize for literature Patrick Modiano: “They both had this same fascination with abandoned places, strange characters. He knew how to translate the idea of absence into drawings. Incidentally, he also collaborated with Modiano on several occasions”. He also remarks: “From his father he inherited a precise line and a range of pastel colours that suffuse his drawings.” (See other interview of François de Ricqlès here) 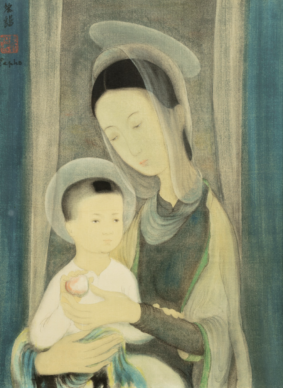 His father, Le Pho (1907-2001), son of the Viceroy of Tonkin in Vietnam, arrived in France in 1930 and settled there permanently after meeting the woman who would go on to become his wife. He is one of the most famous modern Vietnamese painters and in 2019 in Hongkong one of his canvases from 1931 depicting a reclining nude sold for 1.2 million euros, the record price for the artist. More generally he is appreciated for his Madonnas imbued with an Asian style, including one that went for 1.1 million euros at Neuilly in 2020. In the Le Tan sale, a “Vierge à l’enfant” (Virgin with Child) painted by Le Pho in around 1935 is estimated at 50,000 euros.

Pierre’s daughter, Olympia Le Tan, is a fashion designer based in New York. She regrets the fact “that we (the children) were not asked to be involved in this sale”. She talks about her father’s eclecticism: “he was always looking for different things. First the artists from the 1940s like Christian Bérard, then oriental ceramics, then roman antiques… He used to say, however, that he was not attached to the objects. It was the hunt that was important.”

The private dealer Andrew Strauss, a specialist in Man Ray and former expert at Sotheby’s, used to visit the illustrator often. He is defined by “his taste for the fragment. He liked pieces of objects so long as they embodied great skill in their conception.” (See other interview of Andrew Strauss here) 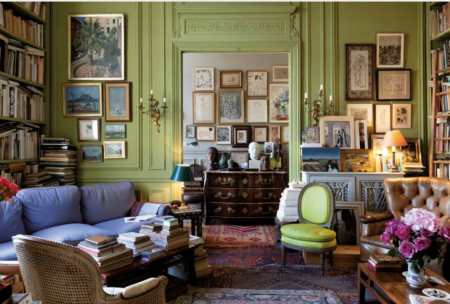 We find the “cabinet of curiosities” spirit in the sale catalogue too, from a wooden lacquered Japanese mask from Noh theatre (estimated at 200 euros) to an ink work by Christian Bérard (1902-1949) depicting the surrealist writer René Crevel (estimate: 1000 euros) via a single boot made for a woman dating from the 1900s (estimate: 400 euros) or a blue and white china vase decorated with a battle scene (estimate: 6000 euros). 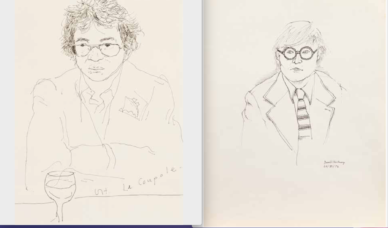 At a dinner at the La Coupole restaurant in Paris in 1974 in the company of British painter David Hockney, each artist made a portrait of the other in black ink. These works are presented next to each other in the catalogue. The image of Pierre Le Tan by David Hockney has an estimate of 30,000 euros. 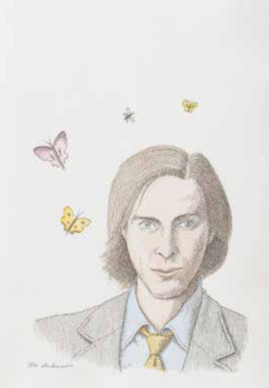 But Le Tan was uncomfortable with today’s system of art stars. He declared: “About sixty years ago, artists had a more carefree life. Today, artistic production is highly formatted.”

His gaze was trained on the elegance of a former time. This is what the final fragments of his collection reveal. 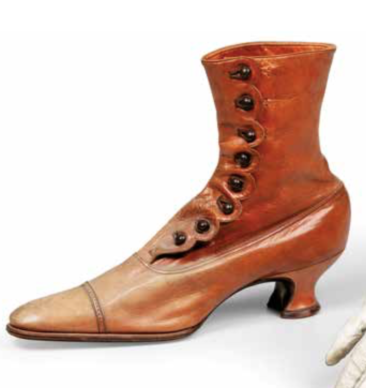 Art history and the art market: the dealer who made replicas for Duchamp in 1964 recounts the experience and David Nahmad talks about the Picasso he just bought for 120 million dollars