Visionaries. In times of crisis, humanity is always looking for people who seem able to reveal truths before everyone else. These modern-day magi, bereft of their crystal balls, may take the guise of scientists, doctors, anthropologists, or those who specialize in the natural world, experienced people who are nobody’s fools during a critical period, or on the contrary they may be very young people who have an unparalleled capacity for sniffing out the zeitgeist. 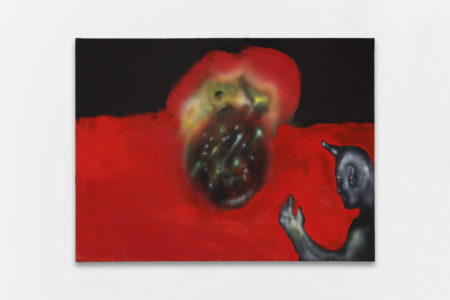 The young are right

Covid-19 and its long trail of fragilities and upheavals will have taught us one thing at least: the young can also be right. Usually at the very least there has to be a revolution like that of May ’68, or a movement that’s “anti” practically everything, like the one that developed against the Vietnam War, to enable them to have their say. This time it’s the public health crisis that’s making us recognize that their vision, in terms of social media, the internet and the virtual world in general, is THE new reality.

“Future star of the French scene”

Pol Taburet is 23 years old and is already being described as a “Future star of the French scene” by the magazine Les Inrocks and is already being collected by prestigious institutions like Lafayette Anticipations. If we think about it, at 23 years old Pol Taburet, who has both Breton and Guadeloupean heritage and lives in the popular district of Belleville in Paris, has spent a not insignificant part of his very young adult life living under regulations restricting travel and otherwise prohibiting contact.

At 23 years old – as you can see in the video I filmed with him – he’s already consulted a considerable mass of information, which is not subject to the hierarchies one would expect for knowledge obtained through academia, and which has, most importantly, been accessed via his iPhone. From Goya to lap dancers in dark American cities, from horror films to Francis Bacon, from cartoons to William Blake, all of his references pass through the prism of the screen. Incidentally, the colours he uses are very bright, like those onscreen. There is also a sense of the video games that he used to diligently play when he was younger, plus the fact that his paintings work very well on screens too.

Far removed from the ideologues of the new generation, he says: “I’m not calling for anything. I just want to talk about things I find fascinating.” He is simply within his painting to the point of declaring things like: “I like colours that are in poor taste” or “painting from the wrong perspectives allows you to create disorder”. Paul Cézanne, with his overly foreshortened tables, couldn’t have said it better. 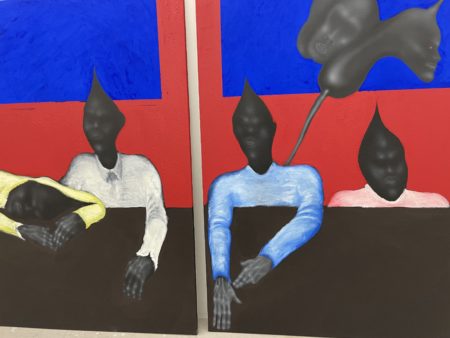 Pol Taburet is also interested, in no particular order, in the spirits of voodoo (Quimbois) as told by his Guadeloupean grandmother, explains to me a claustrophobic kind of rap from Atlanta that emerged during the 2000s known as “trap”, and thinks of his paintings like “after parties” – beauty is not the aim – in which his heroes from soundless nightmares have heads covered in a black base layer to allow each viewer to identify with it. His paintings play with empty space, mixing various materials and techniques: acrylic, oil paint, oil pastel, and airbrush.

Oscar Wilde was a man besotted with youth – including his own – to the point of writing “The Picture of Dorian Gray”, and he once said: “There are two worlds. The one exists and is never talked about: it is called the real world because there is no need to talk about it. The other is the world of art: one must talk about it because otherwise it would not exist.” 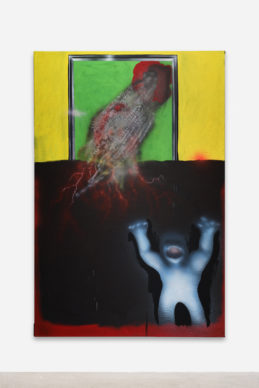 This is the paradoxical and disenchanted world of a bright young painter, animated, cheerful, with a lust for life. 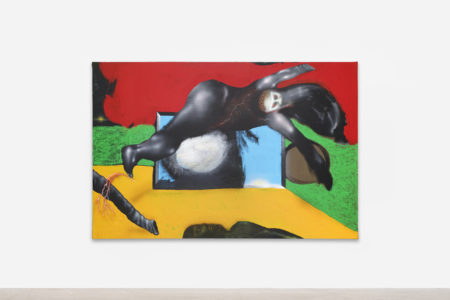