One of the most beautiful current exhibitions in Europe can be found at the Foundation Beyeler in Basel, which is showcasing an imaginary dialogue between Rodin and Arp. It opened in December 2020 (See here the director of the Fondation Beyeler, Samuel Keller, speaking about the art that makes him feel good). But this dialogue is now all the more imaginary since the foundation has closed temporarily due to the public health crisis. In the meantime, you can see the images and watch the interview filmed in December on this rather unconventional subject. (See here a report about the Musée Rodin) 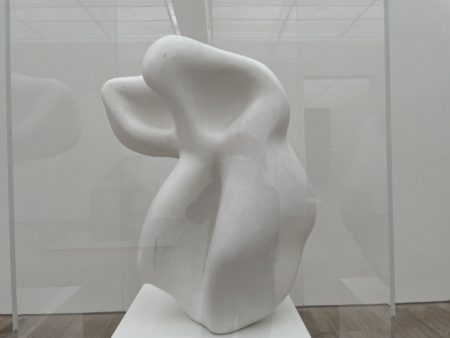 A tip for a virtual tour

We also have a tip that allows you to access a virtual tour of this extraordinary show. You have to go to the institution’s website and at the bottom of the page, in the media section, click on “press conference”. This enables you to watch the curator Raphael Bouvier walking for 70 minutes around the exhibition space containing 110 artworks and explaining the articulations of this relationship between the major sculptor in art history Auguste Rodin (1840-1917) and Jean Arp (1886-1966), known for his abstract three-dimensional creations. This video is not as slick and well produced as that of, for example, the pay-to-view film (8 pounds) made by the National Gallery in London on Artemisia Gentileschi. 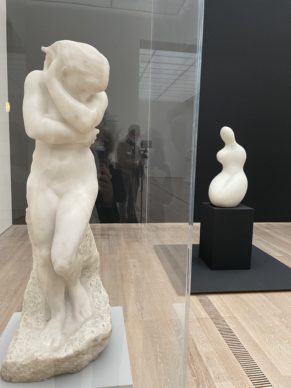 Rodin is often considered to be a classical artist who – with his “Thinker” and “Kiss” – produced works that have become sleek emblems of western iconography. Yet the French sculptor was endlessly inventing new forms. He assembled pieces out of disparate bodies and objects. He also left certain pieces deliberately incomplete. We can see his genius in the plasters, several extraordinary examples of which have been loaned for the show by the Musée Rodin in Paris. 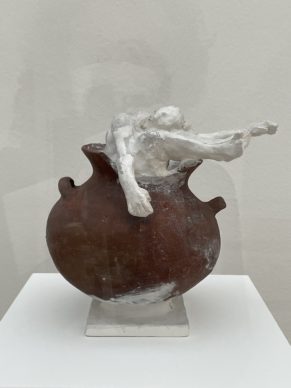 Catherine Chevillot, head of the Musée Rodin in Paris, explains the benefit gained from this unlikely confrontation, which she initially found surprising.

The fact is that Rodin threw open the doors to everyone who came after him in sculpture, such as Brancusi who simplified forms, followed by Arp who made them abstract. His idea was not to imitate life but rather to produce an illusion of life using static forms, creating, among other things, near-imbalances, and zoomed-in views of fractions of anatomies. 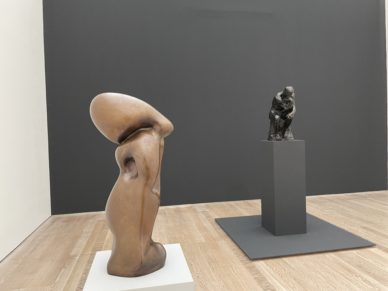 As Raphael Bouvier explains, Arp never theorized on his relationship with Rodin and we don’t even know if they met. 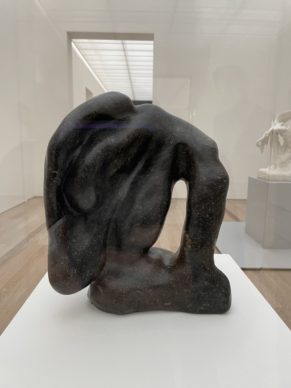 The exhibition, however, takes as a starting point a “sculpture automatique” of his from 1938, the fruit of a spontaneous process that revealed Jean Arp’s unconscious and is entitled “Hommage à Rodin”. It is placed not far from a fascinating “Femme accroupie” by Rodin, which bends the subject’s body forwards so she is leaning between her legs in a primitive posture. 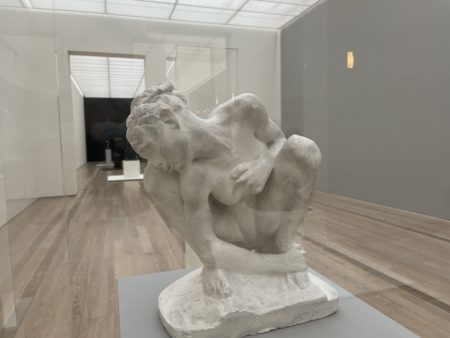 The parallel also works, among others, for the sublime “Torse d’Adèle”, the plaster of a woman’s nude torso, positioned not far from a “Torse gerbe” from 1958 by the Swiss sculptor, which depicts a series of undulations in white marble. At many points in the exhibition we are struck by the similar approaches of one man who strove to make the heart beat faster with his sculpture, and another who wanted to make figuration disappear. 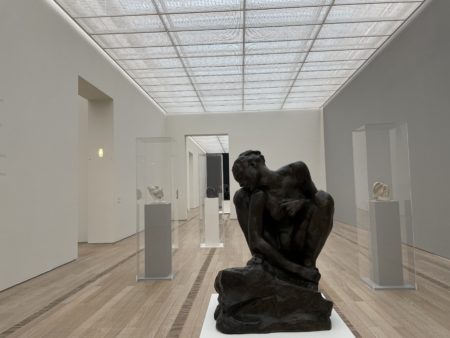