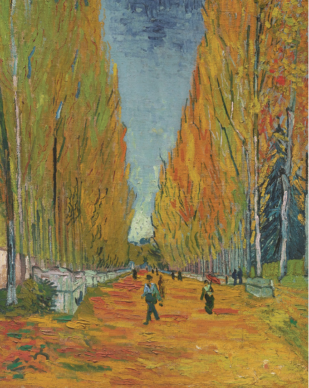 In 1888 Vincent Van Gogh brought his friend Paul Gauguin to Arles. He dreamed of creating a community there, a communion even, of artists captivated by the colours of the Camargue region. It was October when the two men ventured to the outskirts of the town to paint in an old Roman necropolis which was also once a Christian cemetery, the Alyscamps.

A garden of ruins 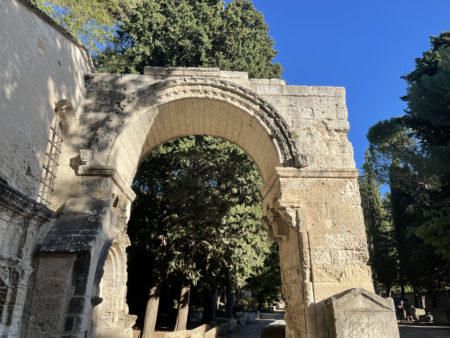 It’s a garden of ruins which is both the site of a bucolic walk and a place of eternal rest that has fallen into disuse. Each of the two men produced a painting that would make the place famous, with its red trees and majestic walkways. Fast-forward 133 years in the same month of October, and the trees have reddened in the same fashion and the ancient headstones are still aligned in the same places, when another artist entered this place. 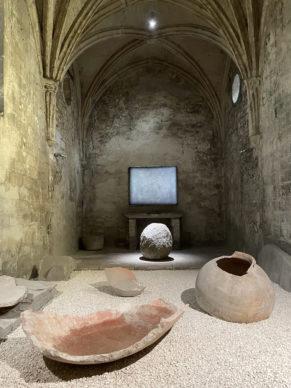 Lee Ufan (born in 1936), the Korean artist who has long been based between Japan and France, creates paintings and conceptual installations that are always imbued with spirituality. 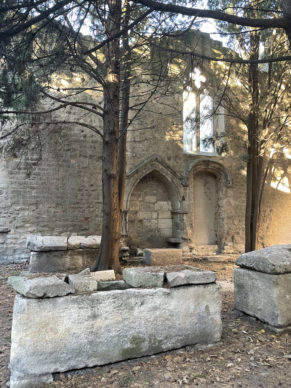 Prior to the Alyscamps, he occupied the park at the Château de Versailles, and took over the whole of the Guggenheim spiral in New York, and a museum in his name on the island of Naoshima in Japan (See the report here). In 2019 a retrospective dedicated to him was staged at the Centre Pompidou Metz (See the report here and also here about his exhibition at Chateau La Coste near Aix en Provence) . In March 2022 he is also due to open in Arles, in a beautiful Provençal townhouse, a foundation for posterity.

At the Alyscamps he has conceived fourteen artworks which together create a hugely poetic layout. Death is present everywhere, starting with a work in tribute to the French artist Christian Boltanski, who passed away recently. Like the latter did in one of his installations, Lee Ufan has arranged little bells that resonate in the trees when the mistral wind blows, like the memory of the souls of the deceased. 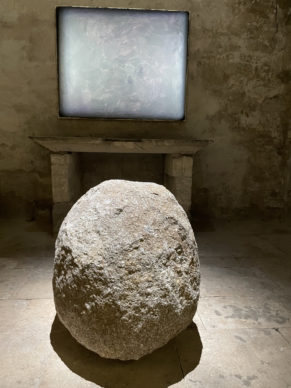 Lee Ufan’s most beautiful work at the Alyscamps can be found in the chapel, which dates from the Middle Ages.Here he establishes a dialogue in an abstract kind of altar with a huge round rock and a black monochrome canvas. “The rocks that we find in nature are generally very old. Stone is time. As for the painting, it’s simultaneously visible and invisible. A kind of luminous black. This was a well known quest in art history for Rembrandt, Goya and even Soulages.” 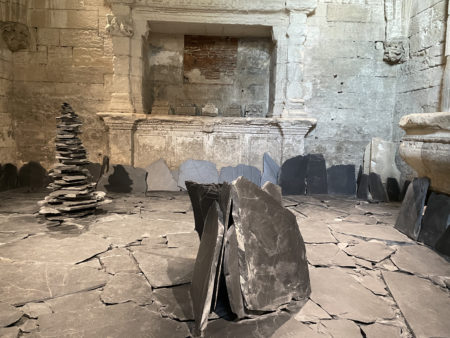 The Alyscamps has also inspired poetry by the artist, who writes: “The murmur of the foliage in the trees, growing in the midst of these ruins, makes the heart beat harder. In this singular space filled with buildings that have almost crumbled, death breathes with near tranquillity. Death transformed by nature doesn’t die, but lives on discreetly. Travellers forget themselves and engage with this infinite space. And they experience another dimension.” 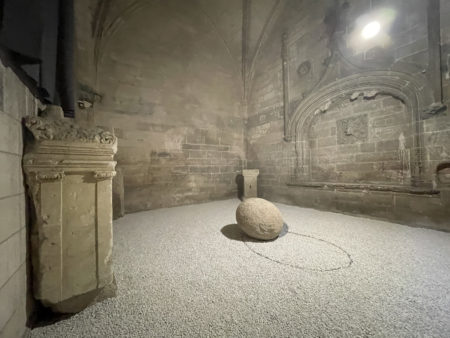 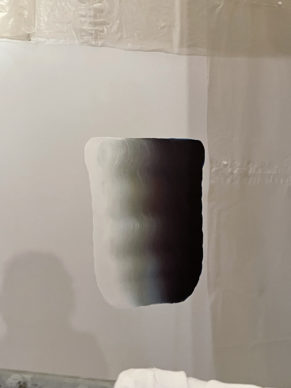 Lee Ufan  also says: “It has been an experience that’s truly out of the ordinary. There was a moment while I was alone in a chapel, when I felt someone behind me, a presence that made me feel very light.”

He concludes: “Here, in amongst the ruins, I’d like visitors to feel this infinite space.” 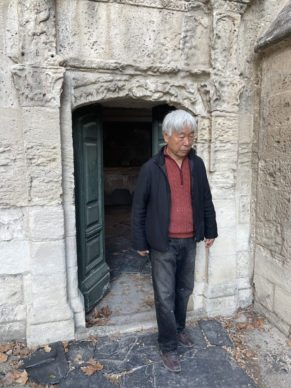 Frieze:the British art fair copes with the uncertainties of Brexit