Impressionist and modern sales have been moving in a strange direction of late. Adopting marketing strategies that are unusual to say the least, they respond to a market where ‘high quality items are rare and demand is stronger than ever,’ as Thomas Seydoux, the Swiss private dealer, observes.

At the New York sales taking place on 15 and 16 May and which set the market trends for the next six months, we discover for instance, between greenish late-nineteenth century impressionist canvases and cubist-style portraits by Picasso, the first ever bookshelf at Sotheby’s modern auction.

Clearly this is not any ordinary item of furniture.

It is by Diego Giacometti (1902-1985), brother of sculptor Alberto, who devoted himself to the decorative arts.

Marc Barbezat, the publisher of Jean Genet’s earliest  beautiful writings, ordered the bookshelf from Diego for his private house on the Ile Saint Louis In Paris circa 1966.

It is a large-format structure in gold patinated bronze topped by eight small figures of birds and trees.

Does this make it a piece of art?

Here it’s more the expected price (estimate $2 million) that confers this status upon the object.

‘It’s a unique vision from Diego imbued with a magnificent spirit. I call that a work of art,’ explains Simon Shaw, head of the Sotheby’s department worldwide, in perfect French, over the phone from New York.

The specialists are clearly keeping in mind the new record set at Christie’s on 6 March at the auction of Diego Giacometti works from the collection of couturier Hubert de Givenchy’s.  A table with embellishments inspired by antiquity fetched 4.1 million euros.

This season at Christie’s in New York, don’t expect to find all the paintings by the Dada and surrealist artist Francis Picabia (1879-1953) in the same auction.

I might add that Picabia’s oeuvre, following his extraordinary retrospective last summer in Zurich and this winter at MoMA New York, has been reappraised and his influence on contemporary art is more clearly visible.

Specialists are reporting that fakes are circulating on the market, however, making buyers more suspicious.

The other news in these sales is that impressionist art is back with a vengeance.

Over the past few years, Renoir had fallen out of fashion in the West, until the Chinese arrived on this market. According to Giovanna Bertazzoni from Christie’s, ‘Renoir, Monet, Van Gogh and Picasso are names that are in particularly high demand in China.

We estimate, for example, that prices for Renoir have risen by 20% in five years due to the effect of demand from China.’

Christie’s is auctioning three Renoir paintings on 15 May estimated at between $700,000 and $3 million.

It was also a private Chinese buyer, or two who bought two important works by Gustav Klimt (1862-1918) recently, one for $150 million – according to Bloomberg, it is the ‘Portrait of Adele Bloch Bauer’ (1912) owned by TV presenter Oprah Winfrey – and one for $170 million – possibly ‘Water Serpents’ (1904-1907), sold by Dmitry Rybolvlev, the Monaco-based oligarch, who purchased it in 2012 for 183 million euros according to  the french Vanity Fair.

According to source in the Chinese business world, ‘major purchases such as these are orchestrated by companies wishing to expatriate large sums of money.’ One speaks about two conglomerates, the entertainment company Wanda and HNA group.

On 16 May Sotheby’s is auctioning a symbolist painting by Klimt that predates his ‘golden period’, which is the most valuable. Estimated at $7 million, ‘Woman in an Armchair’ (1897-98), shows a behatted female figure in a blur of reds.

Both auction houses are promoting a star lot this season.

At Christie’s it’s ‘The Sleeping Muse’ (1913), a rare sculpture by the romanian origin Constantin Brancusi estimated at $20 million. The glided bronze, an egg shape on which he’s drawn a few lines to form the features of a serene face, belongs to a French family, the heirs to Jacques Ulmann, who purchased the work in 1958.

At Sotheby’s the star of the show is a young and sensual nude, contorted by the brush of the Austrian painter Egon Schiele (1890-1918) against a flowery background.

He painted it at the age of 19. The work has been displayed until now in Philadelphia Museum of Art as a loan. The $30 million low estimate is not far off the record price for a Schiele – $35 million for a landscape. The rarity of canvases by this Austrian genius who died aged 28 could set a new yardstick on the market.

Comprising 52 lots, the evening impressionist and modern sale at Sotheby’s has a total low estimate of $178 million. The 53 lots at Christie’s are estimated at $200 million. 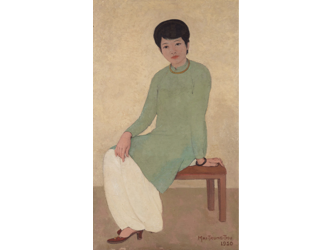