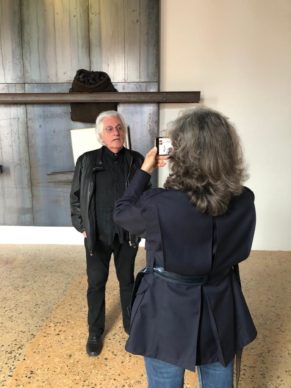 The art historian and curator Germano Celant(1940-2020) has passed away on 29 April 2020, after contracting the coronavirus . He was one of the most fascinating figures in 20th-century art, which he engaged with avidly. He coined the term “Arte Povera”, he was a very early champion of Robert Mapplethorpe and minimal art, and he was a great curator of the Prada Foundation’s most substantial exhibitions, as well as acting as a bridge between Europe and the United States and a living encyclopaedia of 20th century art. I remember at one of our dinners in Venice when this cool, affable man, who always wore a leather jacket and lots of silver rings, told me about his acquaintances with artists who have gone down in art history.

While I was writing my books on the life of Robert Mapplethorpe and the Mapplethorpe/Rodin exhibition he was particularly helpful. Here are a few extracts from interviews conducted with him in recent years. 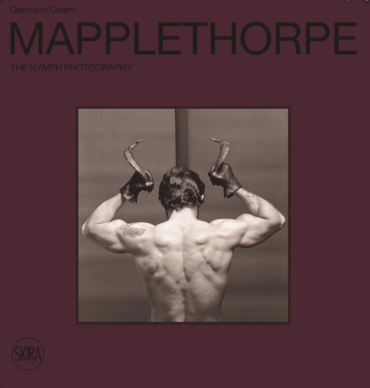 “I met Robert on the occasion of his first exhibition with Holly Solomon in 1977. This was the beginning of Soho, you know. We celebrated the opening of his space in the company of Leo Castelli (…) I came to New York in 1968-1969. And most of the time I lived with artists. I believe it was Joseph Kosuth who first took me in. It was on Grand Street, a strange neighbourhood that was as scary as the Bronx (…) I was already working in the art world. I produced a book on Arte Povera in 1969. One of the first people I met was Roy Lichtenstein (…) The book on Mapplethorpe was published in 1983. That means I started visiting him in 1981, 1982. I had no point of contact in New York and I stayed in his studio in Bond Street four or five times a year. The best part of the story for me was after dinner. We’d get into a terrible state, we’d plunge into these great mountains.

“When Attitudes Become Form” at the Prada Foundation in Venice 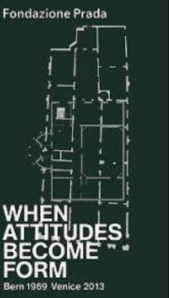 The Prada Foundation is innovating with the recreation of a landmark exhibition, Harald Szeemann’s “When Attitudes Become Form,” which took place in Berne in 1969. In collaboration with artist Thomas Demand and concept-loving architect Rem Koolhaas, curator Germano Celant has come up with a redo. The result is more interesting intellectually than visually. This is an exhibition whose essence is conceptual. An exhibition that verges on performance. This exhibition is the exact transcript of the 1969 Kunsthalle show in a restored Venetian palace in 2013. Ellipses appear where works are missing. The always fascinating Celant, who knows all there is to know about the great decades of the ’70s and ’80s, recalls how the idea for this exhibition came about. “I was talking with Miuccia [Prada]. We’d just done an exhibition about art multiples/edition,” he recalls. “She said: ‘In the end, the only thing that hasn’t been reproduced is an exhibition.’ The most delicate issue was that of the missing works, and since these were predominantly traces of spontaneous artists’ gestures, the temptation was great—despite (according to him) Celant’s protestations—to create their likenesses. And so, hoping to end the discussion and avoid the creation of replicas that weren’t true to the gesture, Thomas Demand said, “So we will call the exhibition ‘When Attitudes Become Fakes.’” The catalog is a memorable record of the Prada Foundation’s initiative, which, unfortunately, costs 90 euros. (See the full report)

On the Prada Foundation which had just opened in Milan 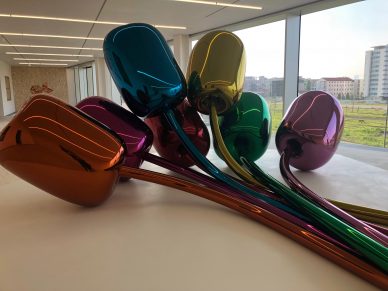 It comprises no less than 600 works re-contextualized by the foundation’s favourite curator, Germano Celant.

Germano Celant talks about a “village of ideas” for the Prada foundation:

But if we’re talking about elegance and time then we should above all mention the new tower designed, like the rest of the renovated foundation, by Rem Koolhaas, specifically to house the permanent collection. The placing of the artworks has been the fruit of lively discussions between Miuccia Prada and Germano Celant, who has advised her for many years on various purchases. Celant explains how it was organized in dialogue with the architecture of the towe. (See the full report)

On Kaws in Hong Kong and Doha 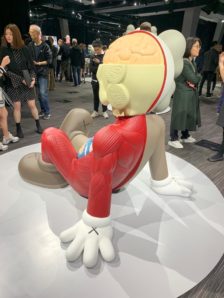 The Milan-based Germano Celant (born in 1940), who has curated numerous exhibitions for the remarkable Fondazione Prada, is the theoretician for the Italian Arte Povera movement, one of the great champions of the American minimalist art movement, and was also acquainted with major twentieth-century figures like Andy Warhol and Robert Mapplethorpe during their lifetimes. But the same Celant is curating an exhibition staged at the HOCA Foundation in Hong Kong until 14 April featuring 37 pieces by the American artist, created over the past ten years (1). (During the Art Basel Hong Kong fair a giant inflatable figurine by Kaws measuring 37 metres in length was also floating in Victoria Harbour). Through taking up the position of curator of the exhibition “Kaws: Along the way”, Celant is lending his credentials to a creation that might seem marginal to many in the global artistic and critical circles. “He represents a new generation of artists who are following in the footsteps of Warhol,” explains the historian. “He’s indifferent to traditional distinctions. He practices appropriation and is fond of the principle of the multiple. He infiltrates his images using any means. At the same time, his iconography is melancholic. To depict closed eyes is to depict death. I’m sorry to all those who are pro tradition, but culture is no longer to be found only in painting but also on shoes, t-shirts, dolls… Keith Haring opened a shop in his day, too. The opening of the exhibition in Hong Kong was crazy. Kaws was treated like a rock star,” concludes Germano Celant, who will also be curating an exhibition opening on 24 October this year at the Fire Station, a public museum in Doha in Qatar. (See the full report)

On Jannis Kounellis at the Prada Foundation in Venice 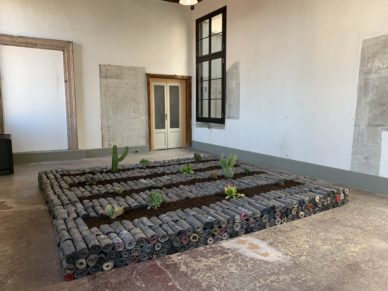 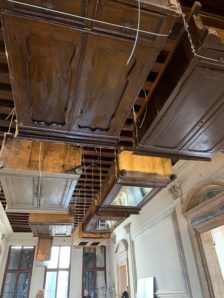 The Greek artist born in 1936, who was part of the Italian Arte Povera movement and was exhibited in 2016 at La Monnaie in Paris (see the report with the interview of the artist in video) is the subject of a masterful retrospective of 60 artworks at the Prada Foundation, the first since his death in 2017. This paradoxical man, who described himself as a painter yet who made installations, often used raw materials and everyday objects for their evocative value. Coal, for example, acts as a reference to a dark atmosphere, to Victor Hugo and to the traces left by the black material, and also to the time it took for this material to come into being. The most spectacular display here is a series of 19 old wardrobes hanging open horizontally, reminiscent of a coffered ceiling like the ones found in Renaissance Italy, open with its secrets finally revealed. The “Prada palace” with its luxurious interiors lends itself particularly well to this exercise. Germano Celant, the curator of the exhibition, believes that if Kounellis is important it is because he was the first to give art a life that it didn’t have through incorporating animals, fire or fragrances. (See the full report)