Once upon a time, a country the size of a continent was slowly throwing off the shackles of authoritarianism. Citizens were beginning to travel abroad, accumulate possessions, launch new enterprises, and come into contact with cultures other than those bright red Communist nations of the little book.

As this new China began its headlong march towards capitalism, a poetic and unmoored spirit by the name of Yang Fudong (born in 1971) was coming of age.

One suspects he must have had access to the Nouvelle Vague films by the likes of François Truffaut  and Jean-Luc Godard for between 2003 and 2007 he produced an astounding series of five hypnotic films that can be considered genuine works of art.

Titled ‘Seven Intellectuals in a Bamboo Forest’, they are being shown in their entirety at the Fondation Vuitton  in Paris in the rooms of its permanent collection. You should allow yourself wander from one room to the next in this sensory journey. I saw one of Yang Fudong’s films in Paris in 2003 at an MK2 cinema when it was being shown by independent curator Caroline Bourgeois. But since these, works neither have a beginning nor an end, they belong in museum where the viewer has the option to come and go, to drift along in the immense poetry of its images.

When interviewed, Yang Fudong never gives a straight yes or a no. Instead he skirts around questions to give the answer he wants to.

‘When I began in 2003 I already had this idea to do a series until 2007. I wanted to show a specific intellectual life but also to give the film spiritual qualities, to show the ideals that these young people aspire to.

This film speaks about a youth that is overflowing with energy. However I insisted in locating it in an unspecified era.

It is in black and white to create a distance from the images. It could be from the ’30s or the ’80s. No, the film isn’t autobiographical.

If it doesn’t have a beginning or an end that’s because it’s like the cycle of the seasons, perpetually renewing itself.

The viewer is the other director. He can stay for one minute or a hundred minutes.’
After much discussion, he agreed to be filmed but only for a short while.

Yang Fudong is currently living in Shanghai. He has just finished shooting a film in the countryside not far from Beijing in the region where he was born. 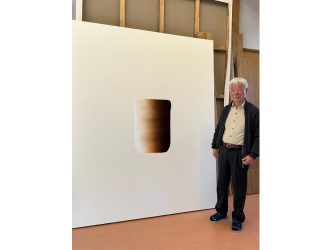 A meeting with Lee Ufan in his Japanese studio