Anri Sala: Two minutes before death against the soundtrack of a clarinet

On 28 January 1986 the American space shuttle Challenger exploded, exactly 73 seconds after take-off. There were seven astronauts on board, including Ronald McNair, a seasoned musician who had taken his saxophone with him. He was also the second African American in history to go into space, and he had planned to play a solo in zero gravity. The fall took two minutes and the entire cockpit, which was intact, plunged violently into the ocean. He died, along with the others. 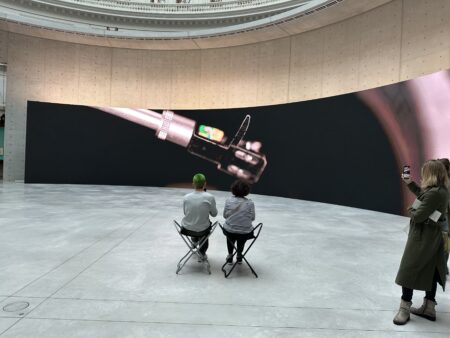 We don’t dare imagine the immense solitude and endless anguish felt by the passengers onboard the aircraft. The French-Albanian artist Anri Sala (born in 1974), who represented France at the Venice Biennale in 2013, is fascinated by this kind of story, which is both dramatic and universal. He references it, as is his usual style, in an allusive way as part his huge installation on view until 16 January at the Bourse de Commerce, the Pinault collection (See here and here reports about the previous shows at Bourse de Commerce). Beneath the dome of the former grain exchange he has installed a projection the likes of which are rarely seen, against a curved wall measuring 24 metres long. In his film without a protagonist, or a constructed narrative, he uses music to link to a second story, one that is also dramatic. 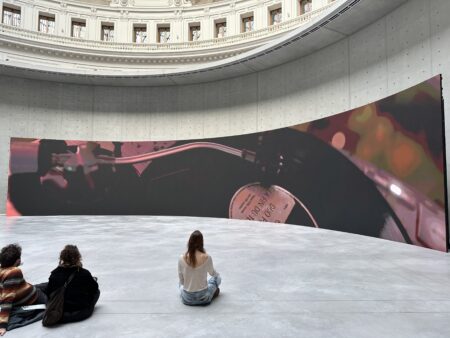 In 1941 the composer Olivier Messiaen, while imprisoned in a stalag in Poland, composed an almost premonitionary work while Hitler was omnipotent: the Quartet for the End of Time. In the chosen extract, a clarinet sounds like birdsong interjected with the sound of a saxophone, a direct reference to McNair. On the screen we don’t see a rocket or a prison. A shot of a record player up close floats in zero gravity; the mysterious hero of this story without end. It’s only when, randomly, the needle touches the record that the piece of music surges out into the space at full volume in the rotunda of the museum.

The spectators are stunned by the spectacle. What is it all about? When we put the question to Anri Sala, he explains his desire to create a mystery. “I don’t have a message. Our age is filled with truths which don’t have one. I don’t like to create literary narratives. Two pieces of music meet. So do two solitudes. This piece constructs a fragile equilibrium that maybe allows us to look at things differently. I like the expression in France: ‘le trac’ (‘stage fright’ or ‘nerves’). I wanted it to produce ‘le trac’.” He has succeeded. 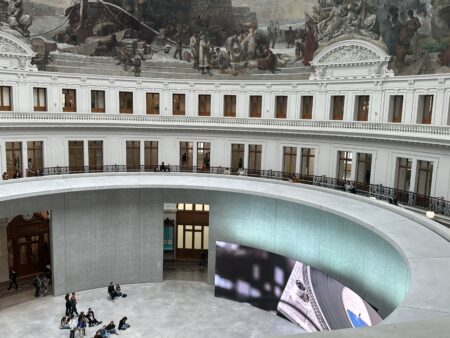 The artist, who grew up in a communist country until he was a teenager, also explains his fascination with the language of music “because words can be opaque, in the service of a system”. His installation enters masterfully into dialogue with the architecture while on the floor of the Collection we can see other videos which also develop this gentle sophistication filled with suggestions. Anri Sala’s strength involves using a contrasting language which uses tremendous resources, sounds at full volume, and giant images in close-up to distil an inkling of information.

It is this strange subtlety that forces the viewer to question themselves. 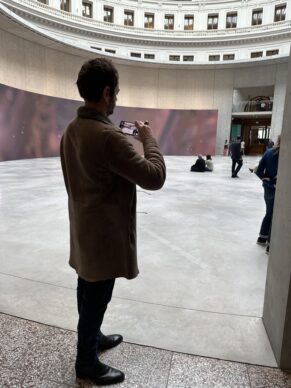