Frieze Viewing Room: the pros and cons of an emerging virtual market for contemporary art 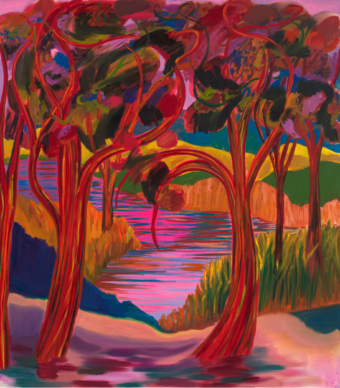 It’s a radical digital revolution. As the coronavirus crisis settles in for the long term across the globe, the virtual initiatives staged by major art-market players are multiplying. Whereas in France the FIAC – which was due to take place in October – fails to offer any alternative solutions, the rest of the world is experiencing a saturation of events of this kind run by the largest market operators.

From 23 to 26 September 2020 Art Basel staged “OVR:2020”, a virtual fair devoted entirely to art made in 2020. It’s uncertain how successful it was. Certain gallery titans such as Gagosian and Zwirner were notably absent. But Art Basel once again is presenting “OVR:20c” from 28 to 31 October 2020, adopting a broader and more classic lens and featuring artworks produced in the 20th century.

From 1 to 4 November the great TEFAF antiques fair, originally based in Maastricht, is launching “TEFAF Online” with the participation of 300 exhibitors.

But this week it’s the turn of Frieze London and Frieze Masters – which are traditionally held jointly at this time of year beneath two tents in Regent’s Park – to present their own digital format. The double show has been reduced in size online. Whereas last year it assembled a total of 290 exhibitors, this year there are only 200. The organizers talk about a hybrid show – one that is both digital and physical – but on account of the travel restrictions to Great Britain the commercial side of Frieze has in fact largely moved online, with the exception of an exhibition of 12 sculptures for sale in the park. However, a handful of VIPs can shuttle between the participating galleries in London thanks to the private cars provided.

For the fair’s director, Victoria Siddall, the digital formula has already been tried and tested (See the report about Frieze New York). “At our first online edition in May 2020 several exhibitors sold out their entire booths. But it’s true that online collectors have a tendency to seek out what they already know. It’s difficult to discover new artists without being able to see their work in real life.” 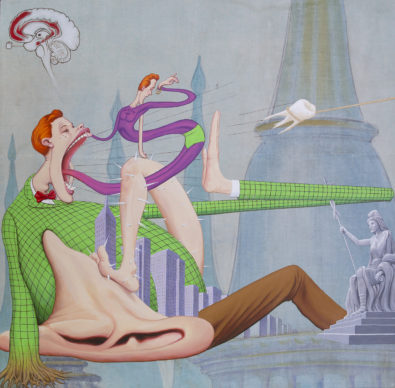 According to Simon Lee from the eponymous gallery with branches in London, New York and Hong Kong who is taking part in the Frieze Viewing Room (he is presenting the fascinating and highly political paintings of American artist Jim Shaw, among others. See the report about last year Frieze with an interview of Jim Shaw), “the ‘primary’ market, for works presented for the first time by a gallery, remains active. Sales are fairly frequent and fluid up to a price level of 250,000 pounds. The same is true for the more high-profile artists and the great classics of contemporary art. Offerings from mid-career artists often seem to encounter more difficulty.”

At the top of the classic range, the fair is presenting a painting by Paul Cézanne at the virtual booth of the Acquavella gallery from New York, which is surely the star of the show. “Jeune fille à la poupée” (Young Girl with a Doll) painted in 1894 is on sale for around 15 million dollars. In 2001, presented by Phillips, it failed to find a buyer for 6 million dollars. In 2017 visitors to the “Cézanne et le portrait” exhibition were able to view the canvas at the Musée d’Orsay in Paris. (See the report about the Cézanne show at the Musée d’Orsay). 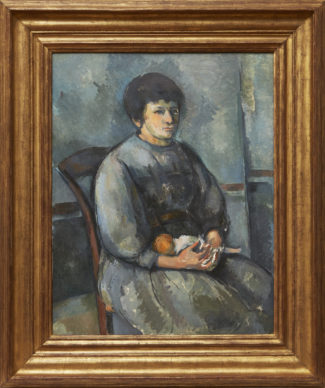 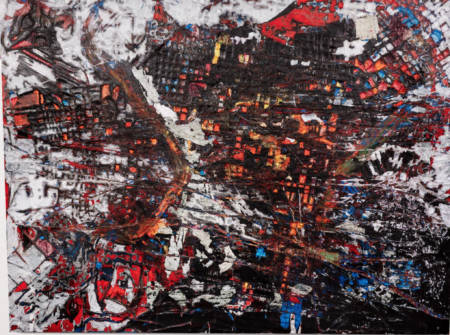 Multinational gallery Hauser & Wirth have also made a high-end gamble. They are presenting a large canvas by one of the stars of contemporary American painting, the charismatic Mark Bradford (born in 1961). In 2018 he represented the United States at the Venice Biennale. His abstract canvases composed of scrapings and collages in colour variations appear today in numerous American museum collections. The work is on sale for 3.5 million dollars. (See the interview of Mark Bradford at the Venice Biennale, and the interview of Ivan Wirth at Art Basel Hong Kong about the prices of Mark Bradford). 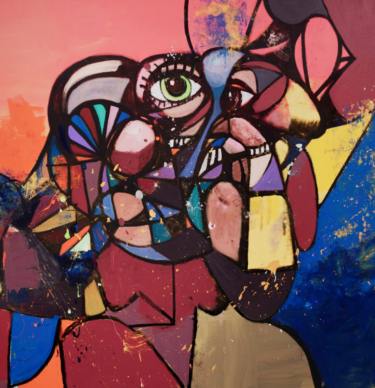 Hauser & Wirth are also offering a painting by one of their most fashionable new recruits, the American George Condo (born in 1957). His paintings, which are particularly popular with the Chinese, seem to take Picasso’s cubist works as a starting point but then employ distortion and bright colours. “The New Normal” made in 2020, a canvas which seems to depict a masked figure, is on sale for 1.8 million dollars. 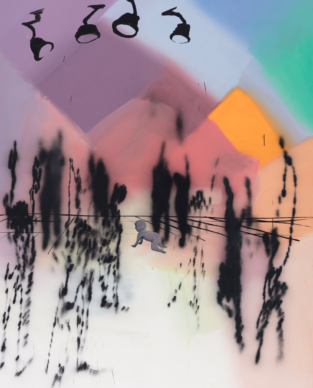 Pilar Corrias is a London gallerist who is known for her excellent eye. She has, for example, presented Tala Madani (born in 1981) since the beginning of her career as an independent gallery, an American painter of Iranian origin who makes mainly figurative works with a unique blend of political and social criticism and oneiric references verging on nightmares. She exhibited at the Secession in Vienna in 2019 and is also taking part in an exhibition due to open on 23 October 2020 at the Palais de Tokyo. Her canvases are on sale for between 40,000 and 200,000 dollars. “Her prices have been steadily increasing over the past 15 years,” observes Pilar Corrias, who is also displaying a 24-minute film by the French art star Philippe Parreno, “The Crowd” from 2015, which is “very significant in the current climate,” explains the gallerist (on sale for between 300,000 and 400,000 euros). (See the interview of Philippe Parreno during his show at the Tate Modern). 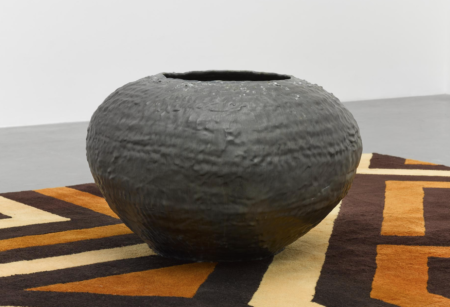 One of the most influential galleries on the London scene is White Cube. For the Frieze Viewing Room they are presenting a solo show by Theaster Gates (born in 1973). The artist from Chicago, who has recently exhibited at the Prada Foundation in Milan, the Palais de Tokyo in Paris and the Kunstmuseum in Basel, addresses the experience of black Americans and their representation in the popular imagination through conceptual and performance artworks. (See the report about Theaster Gates at the Palais de Tokyo).

His new large-format vases, which are unique pieces, are on sale starting at 175,000 dollars. “The prices reflect the importance of his presence in institutions,” observes Mathieu Paris, senior director, who estimates that his prices have seen an average annual increase of 10% over the past 5 years.

During this period of major global economic instability, against all expectations none of the gallerists interviewed claimed to have observed any drop in prices for contemporary art. While they admit to offering higher discounts than usual, they fear that trust in the market would weaken were they to officially display lower prices. In keeping with this mood, the auction houses are showing particular caution with regards to what they present at auction. So we still don’t know what the newly listed prices will be, born of this unprecedented global crisis.