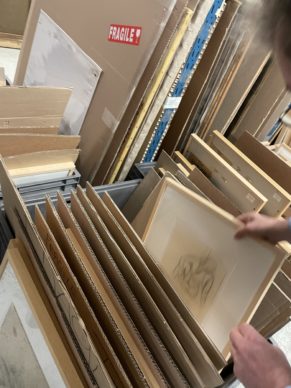 The French politician Talleyrand  is attributed with the saying: “Behind every great man there’s a woman.” In observing art history, we might add that behind numerous great artists there are many women. 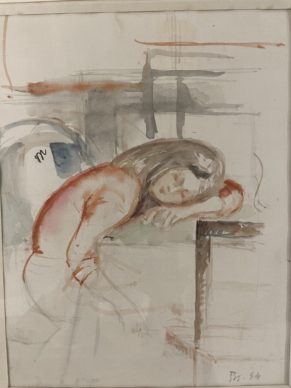 The fascinating French painter Balthazar Klossowski de Rola, known as Balthus (1908-2001), who ended his days in a Swiss chalet near Gstaad, produced a body of work in which his partners were more than just people in flesh and blood. In posterity they have been elevated to the rank of sublime sources of inspiration, otherwise known as muses.

At the chateau de Chassy 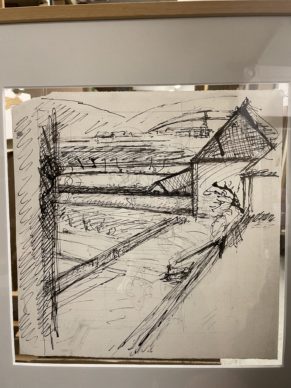 It seems that between 1953 and 1961 Balthus lived with a very young woman, Frédérique Tison (born in 1938), at the Château de Chassy in the Morvan. It was around this time that the artist was appointed as director of the Villa Médicis, the French academy in Rome. 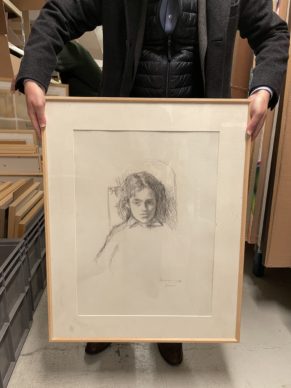 It was also during this period, while Balthus was on a trip to Japan, that he met Setsuko, a young woman studying French who would go on to become his wife, mother to his daughter, and his new muse. As for Frédérique, once the artist left her she became the owner of the Château de Chassy and its contents, thanks to her grateful ex-lover.

She died in 2018, and on 8 December the Parisian auction house Artcurial is auctioning 144 of Balthus’s works, mainly drawings but also including around a dozen paintings that had remained in the Château. This is an exceptional ensemble of artworks, not only due to the number of lots going to auction all at once, but also because this mass of works on paper charts the painter’s creation. 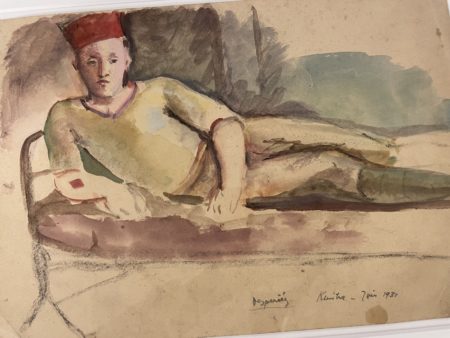 His works are relatively rare at auction (16 were sold in 2019) and we might wonder whether the market is capable of absorbing such a large quantity of them given the public health crisis. There will no doubt be opportunities for purchases at reasonable prices, especially for French buyers, who have an advantage within the current context. Drawings are a difficult subject because they don’t come across particularly well in photographs. The  lots aren’t available for viewings by foreign collectors who, generally speaking, are currently unable to travel outside their respective countries.

The head of modern art at Artcurial, Bruno Jaubert, is nonetheless optimistic. “Since the catalogue came out we have had plenty of requests.” One of the attractions of the sale is its price estimates, which are exaggeratedly low. This is what Bruno Jaubert calls “an estate sale”. All profits from the sale will go to Frédérique Tison’s three children. The pieces are all listed in the artist’s catalogue raisonné.

The record price for a Balthus painting at auction, 16.9 million euros, was attained in 2019 for a canvas from 1939 depicting a young girl in a contorted position: “Thérèse sur une banquette” (See the report about the painting). According to the art market database Artprice, 70% of sales over the past 10 years took place in the United States. It should be pointed out that the artist was already well established across the Atlantic during his lifetime, thanks to the famous New York dealer Pierre Matisse. 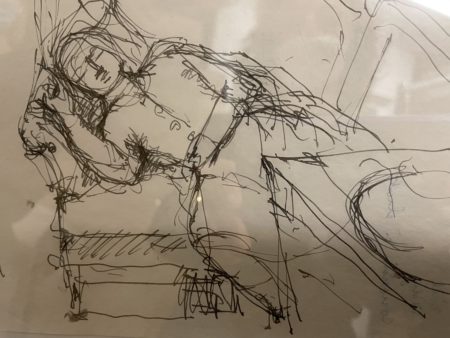 The other difficult aspect of this sale lies in the controversial nature of Balthus’s art, at a time when the spirit of “political correctness” is omnipresent. We know the artist had a fascination for very young women, starting with Frédérique Tison, who was around 17 years old when their relationship began. In 2013 the Metropolitan Museum in New York dedicated an exhibition to Balthus of exceptional quality.

However, “in the catalogue the curator, Sabine Rewald, was careful to emphasize the model’s perspective over the aesthetic significance of the paintings. Balthus is a great artist with a unique world and it would be a shame to overlook his contribution to the history of art,” observes Cécile Debray, director of the Musée de l’Orangerie in Paris, who staged a Balthus retrospective in Rome and Vienna in 2016. In 2018 the Fondation Beyeler in Basel (See the report about the exhibition) and then in 2019 the Thyssen-Bornemisza Museum also took turns to spotlight the painter’s oeuvre. Proof that his merits are still recognized today. 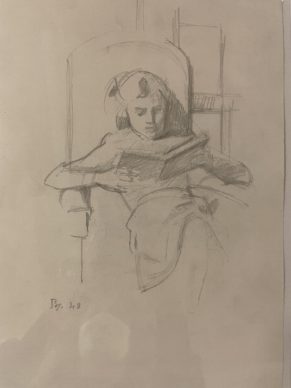 Balthus mined art history for solutions within his painting, which was otherwise very anchored in the 20th century. Rich in aesthetic erudition, he touches on the turmoil of physical desire with extraordinary mastery. In his paintings he constructs what look like scenes from a play in which the figures have their bodies twisted in strange gymnastics, similar to the later works of Degas. His friend, the writer Antonin Artaud, spoke of the “cruel realism” of Balthus.

His last wife, Setsuko Klossowska de Rola, who is herself a painter and holder of the artist’s moral rights, explains: “he drew details constantly before the execution of a drawing for the final composition of the piece” (See her interview when she speaks about the mystery in Balthus paintings) 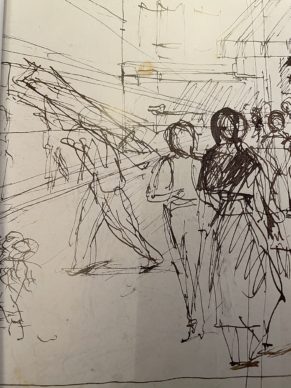 Several works are studies from the 1930s for his masterpiece “La rue”, a painting in a surrealist vein that these days is housed at Moma. They have estimates between 3,000 and 8,000 euros. 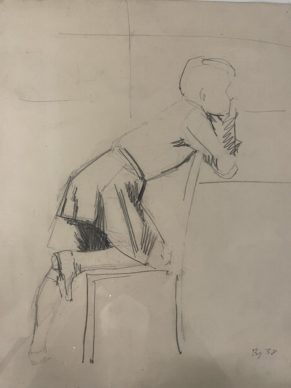 In 1941 Picasso acquired a Balthus painting that is now at the Picasso Museum in Paris, “Les enfants Blanchard” from 1937, which depicts a brother and sister whose bodies are positioned in strange geometric shapes. Two studies for this composition are estimated at 10,000 euros each. 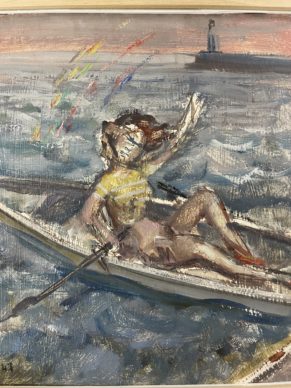 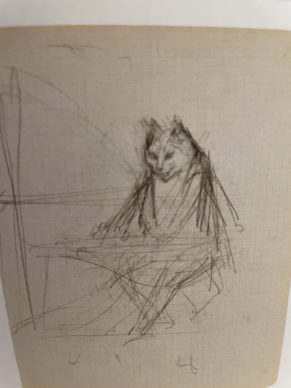 In 1947 Balthus painted “Le chat de la Méditerranée”, a surrealist scene depicting a pleasure-seeking figure who is half-cat, half-man about to eat a meal while a young girl drifts away in a boat. The painting is now apparently owned by the Agnelli family of Turin. A study painted on card from 1947 featuring the cat is on sale with an estimate of 30,000 euros. 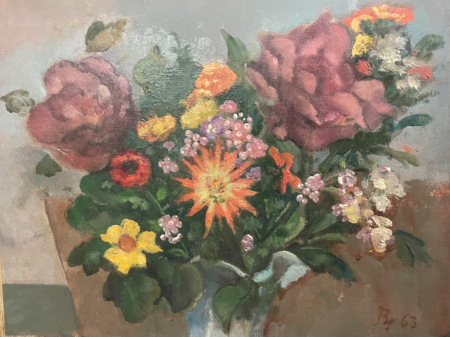 A number of works present in the catalogue for the 8 December sale date from the Chassy period or just afterwards, when he was developing a painting technique inherited from the Italian Renaissance. “This material that he recreated on canvas was similar to the effects of frescoes,” explains Setsuko Klossowska de Rola.

A Slice of art history

This is a true slice of art history insofar as it is dedicated to the artist’s former muse, but also because the work reveals how much inspiration he found in his predecessor and giant of modernity, Cézanne. 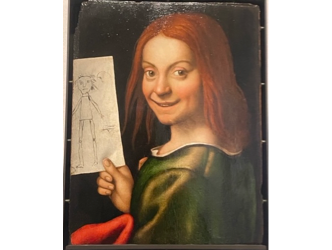